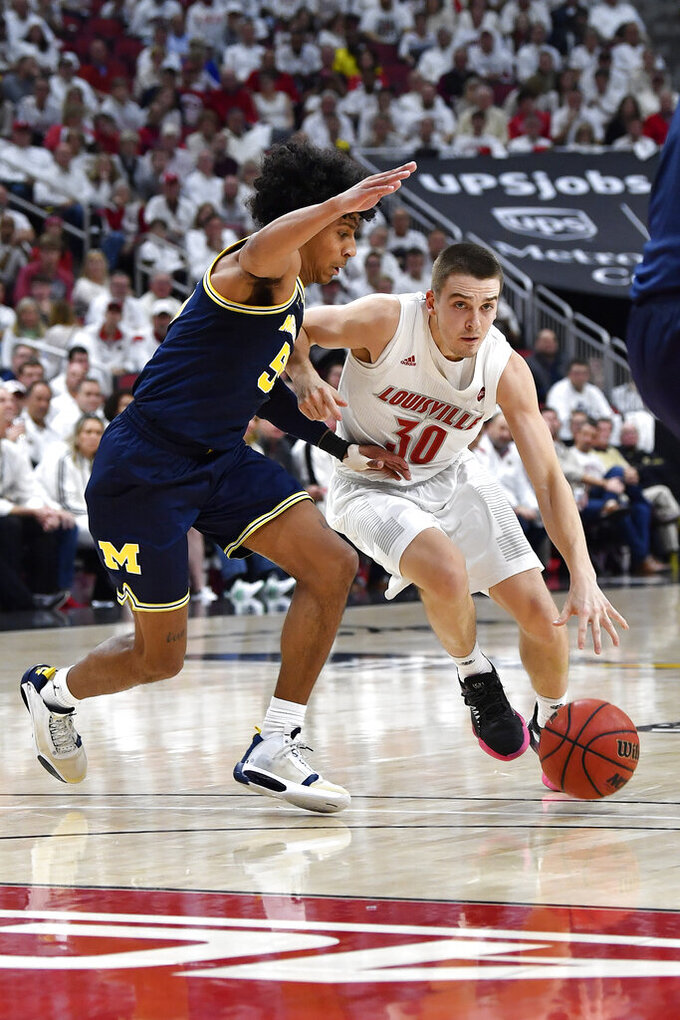 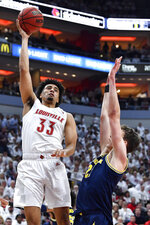 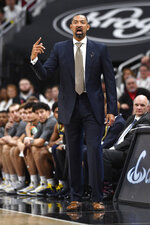 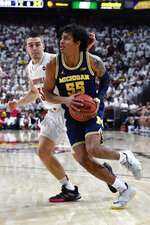 LOUISVILLE, Ky. (AP) — Louisville players and coach Chris Mack cared more about protecting the basket against Michigan than defending their new perch atop the rankings.

Fulfilling that priority helped the Cardinals succeed in their season debut as the nation’s No. 1 team.

Jordan Nwora had 22 points and 12 rebounds, and Louisville held No. 4 Michigan to a season-low 26% shooting mark for a 58-43 victory Tuesday night in its first game since returning to No. 1.

The Cardinals (8-0) shot just 37% but their defense stifled Michigan (7-1) much of the night as they earned a signature victory in the Big Ten/ACC Challenge one day after claiming the top spot in the AP Top 25 for the first time in six years. Though their second-year coach has downplayed rankings, the win was significant for a program he has guided back into the national championship discussion following a sex scandal and the school’s involvement in a federal corruption investigation of college basketball.

Players seem more focused on building on it.

“Our season’s not over yet,” Cardinals guard Lamarr Kimble said. “No. 1’s just a number. We’re going to continue to get better.”

As for Mack, he was most satisfied with how his team denied just about everything Michigan attempted while passing or shooting, holding the Wolverines to just better than half their scoring average (82.4 points per game). That mattered on a night when baskets were nearly as hard to come by for the Cardinals.

“The story of the game was just our defensive effort, from the beginning of the game all the way through,” Mack said. “We probably played 38½ minutes as good a defense as we can play, outside of maybe the first minute of the second half.”

Louisville answered the Wolverines’ 6-0 spurt that got them to 30-26 with a 10-0 run keyed by six points and a couple of pivotal rebounds from Nwora, who tied his season high on the boards.

“That’s really been a big focus for us, being strong on D,” Nwora said.

The Cardinals also kept the Wolverines and first-year coach Juwan Howard from adding another top-10 upset to the ones that helped them enter the Top 25 and match Kansas (1989) for the biggest jump from being unranked in the 70-year history of the poll.

"Give them credit,” Howard said. “They do a great job of defending. Unfortunately, they did a good job of keeping us out of the paint.”

Steven Enoch had 10 points and 10 rebounds, and Dwayne Sutton pulled down 11 boards as Louisville topped Michigan 48-41 in that category.

Louisville unveiled a banner at halftime to honor Final Four Most Outstanding Players Darrell Griffith (1980), Pervis Ellison (1986) and Luke Hancock (2013). The banner was displayed on the opposite end of the arena from where the Cardinals’ 2013 NCAA title hung before it was removed as part of sanctions from the sex scandal. Hancock and several teammates sued the NCAA and reached a settlement this summer that restored his title and statistics.

Louisville backed up its high ranking with the signature win it sought. Michigan could fall a few spots but can probably stay in the top 10 by beating Iowa this week.

Michigan: After a strong shooting stretch that keyed wins over No. 6 North Carolina and No. 8 Gonzaga to take the Battle 4 Atlantis in the Bahamas, the Wolverines fell back to Earth. They began 2 of 13 from the field and never really recovered. They were outscored 22-16 in the paint, and getting those points was a challenge against the pack line defense.

“They’re active with their hands down the lane on ball screens,” said the 7-foot-1 Teske, who shot 6 of 18 from the field and 1 of 4 from long range. “A lot of our shots weren't falling.”

Louisville: The Cardinals weren’t sharp by any means but passed their first big test against high-profile competition. Their defense limited chances inside and forced Michigan into perimeter shots that often missed. They also were able to string together enough small runs to gain some space.