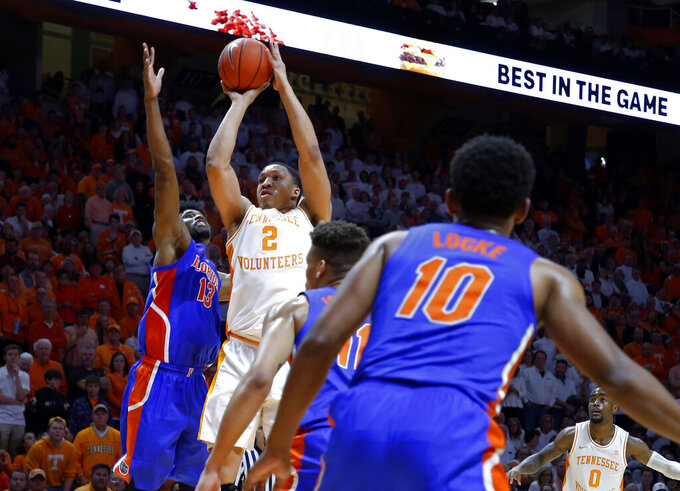 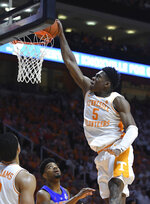 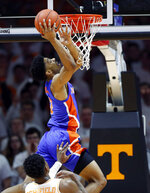 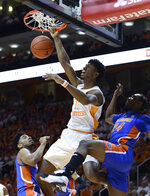 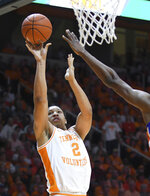 KNOXVILLE, Tenn. (AP) — Tennessee's players resisted the temptation of staging a repeat performance of a postgame "Gator chomp" after their latest victory over Florida.

The sellout crowd at Thompson-Boling Arena did it instead.

Grant Williams scored 16 points as the top-ranked Volunteers defeated Florida 73-61 on Saturday to extend their school-record winning streak to 18 games.

"I appreciate how hard they've competed," Barnes said. "I appreciate the fact they do want to get better, and we can get better. I think they believe, like our coaching staff, that our best basketball's ahead of us. It's not going to be easy, but they're competitive. Where we are, they deserve the credit."

Tennessee's winning streak includes a 78-67 victory at Florida on Jan. 12. Immediately after that game ended, all five Tennessee players on the floor performed a "Gator chomp " in a mock version of the cheer favored by Florida fans. Tennessee's Admiral Schofield said at the time the Vols were responding to "disrespectful" and "inhumane" comments Florida fans had made during the game.

This time, Tennessee's players had a more muted celebration but fans started doing the Gator chomp in the final minute and continued it as the final horn sounded.

"Poetic justice," said Schofield, one of four Tennessee players to score in double figures. "At the same time, it's all in good fun. A deep rivalry, but many years of tough, hard-fought football games, tough basketball games. At the end of the day, I think a lot of people just enjoy the intensity of our rivalry with Florida."

"They're the best team in the country," Florida coach Michael White said. "They're equally as good defensively as they are offensively."

Tennessee led by as many as 16 late in the first half before Florida rallied to get within 36-30 at the intermission.

Florida cut Tennessee's lead to 40-36 with 17:37 left, but Tennessee answered with a 12-2 run that included consecutive 3-pointers from Lamonte' Turner. After Florida scored seven straight points to get the margin down to seven, Tennessee responded with a 9-0 run that featured another Turner 3-pointer plus two dunks from Schofield.

Schofield said after the game that the Vols responded to the way Barnes had challenged them.

"When you're winning so much and winning consecutively like this, you can get lost in it and little things become big things. We didn't want that as a team. We had to get back to realizing why we even started paying this game — and that's competing. Coach challenged us to just go out and compete tonight."

Florida: The Gators are barely above .500 but entered this game 42nd in the NET rankings, indicating their postseason chances weren't over yet. But three straight losses to Kentucky, Auburn and Tennessee have dealt a big blow to their hopes for an NCAA Tournament at-large bid. The Gators still have two games with No. 21 LSU plus road trips to Alabama and No. 5 Kentucky.

Tennessee: The Vols have said for several weeks they must recapture the defensive intensity they showed last season. They've started showing that form lately. After playing outstanding defense Tuesday in a 72-60 victory over Missouri, the Vols held Florida to a total of three points for a stretch of over nine minutes Saturday.

Tennessee was playing without reserve swingman Yves Pons, who had suffered a facial injury while colliding with a teammate during Thursday's practice.

Tennessee entered the day leading the SEC in scoring (86.0) while Florida had the SEC's top scoring defense (63.4). Tennessee ended up below its scoring average but still won that matchup by shooting 52.8 percent (28 of 53), including 59.3 percent (16 of 27) in the second half.