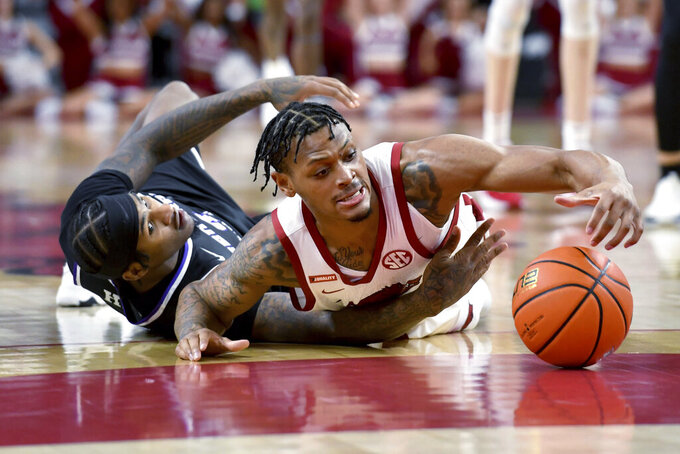 Arkansas (7-0) forced the Bears into 14 turnovers in the second half. Au’Diese Toney scored 14 of his 16 points in the final 20 minutes to ensure Arkansas’ largest margin of victory of the season. The Razorbacks outscored Central Arkansas 56-25 in the second.

The Bears (1-7) were 7 of 10 from 3-point range in the first half and trailed by only six. Arkansas started the second half on an 11-3 run and added a 12-0 run midway through, breaking open the game.

“Night and day, the way we played from one half to the other,” Arkansas coach Eric Musselman said. “Probably as frustrated as I’ve been the first half. Second half, very happy with how we played.”

Devo Davis scored a season-high 16 points for the Razorbacks, while JD Notae scored 10, giving him double digits in each of the Razorbacks’ first seven games.

Davis was an important player for Arkansas at the end of last season, becoming a starter and scoring in double figures in all four of the Razorbacks' NCAA Tournament games. Wednesday was the first time he'd eclipsed 10 this season.

“Last year, his personality, the smile, the energy, he gave me enthusiasm,” Musselman said of his point guard. “I think this year he’s been a little bit more conservative maybe from a having-fun standpoint. You’ve got to have joy when you’re playing the game and that’s across the board.”

Both Arkansas and Central Arkansas have players on their respective rosters from inside the state. Many of them played against each other regularly in high school, even in the same conference, including Davis and Hall. Davis enjoys reliving the memories.

“I actually played against Darious in high school,” he said. “It wasn’t good. He went to Mills. They blew us out. Some of us are even from the same parts in Arkansas. It’s fun.”

Arkansas forward Jaylin Williams scored eight points and grabbed a career-high 13 rebounds. It's the third time the sophomore has come within a basket of a double-double while making the mark rebounding.

“I guess I’m just getting lucky. All the balls are coming toward me, I’m just grabbing them,” Williams said.

Arkansas has yet to be truly tested at Bud Walton Arena this season, winning by an average of 19 points in five games.

Central Arkansas, picked last in the ASUN in its first season in the conference, is searching for consistency after having upset Oral Roberts, a Sweet Sixteen team last year, in November.

Central Arkansas: UCA travels to the northeast part of the Natural State next to visit Arkansas State.