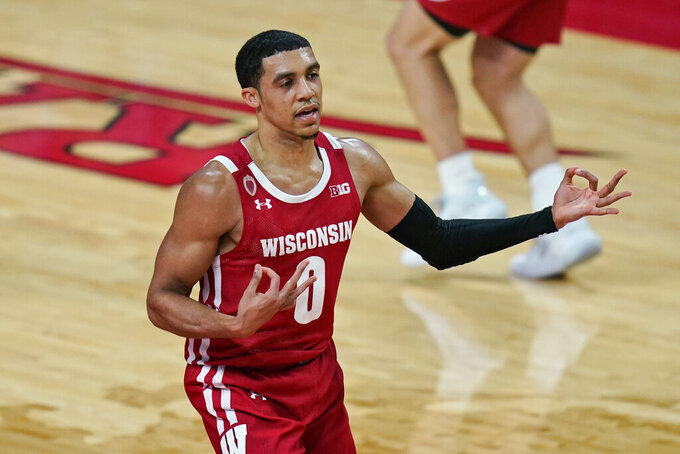 GAME OF THE WEEKEND: No. 15 Ohio State at No. 10 Wisconsin, Saturday. Wisconsin (12-3, 6-2) is out to its best eight-game Big Ten start since 2017 and has won 18 of its last 19 at home. D’Mitrik Trice is averaging 19.1 points over the last seven games. The Buckeyes (11-4, 5-4) lost to Purdue on Tuesday, snapping their three-game win streak, and have been without point guard CJ Walker (torn right hand ligaments) for four games. Ohio State has lost three straight to the Badgers and hasn't won in Madison since December 2017.

LOOKING AHEAD: No. 4 Iowa (12-2, 6-1) loses a game against Nebraska on Sunday because of the Cornhuskers' COVID-19 issues and will go seven days between games. The Hawkeyes, who entered their home game against Indiana on Thursday night a half-game behind conference-leading Michigan (12-1, 7-1), would have liked to have had that home date with the last-place Huskers before back-to-back games against ranked opponents Illinois and Ohio State.

INSIDE THE NUMBERS: There have been 21 games involving Big Ten teams canceled or postponed because of COVID-19 issues through Wednesday, and two of the six scheduled this weekend have been called off. ... The Big Ten has six teams in the AP Top 25 and 13 teams in the top 100 of NCAA NET rankings, including three in the top 10. ... Nebraska will go at least 19 days between games because of a COVID-19 outbreak. The Huskers, who have had four games postponed, are scheduled to play Penn State at home Jan. 30. ... Iowa's Luka Garza leads the league with at least 30 points in six games. Minnesota's Marcus Carr and Illinois' Ayo Dosunmu are next; each have three.

ON THE WOMEN’S SIDE: No. 11 Michigan's starts of 10-0 overall and 5-0 in Big Ten play are best in program history. The Wolverines went into their game against Ohio State on Thursday looking to set a school record with an 11th straight win. Co-preseason player of the year Naz Hillmon is averaging 23.7 points and 11.9 rebounds per game and the Wolverines are outscoring opponents by 24 points. Hillmon and second-leading scorer Leigha Brown are combining for 43.4 points per game and shooting 64%.