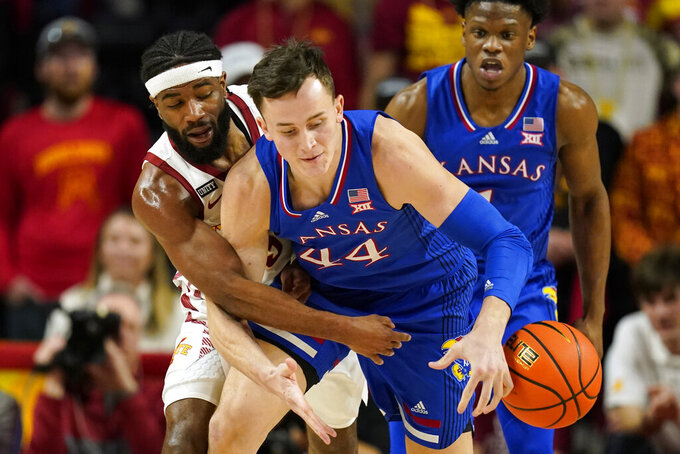 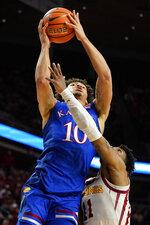 Jalen Wilson scored all 13 of his points in the second half. Christian Braun also finished with 13.

Kansas again struggled with turnovers against the Cyclones. The Jayhawks committed 16 in a 62-61 win over the Cyclones on Jan. 11. They had 16 in the first 20 minutes on Tuesday.

Despite those struggles, Kansas built a 19-10 lead when Braun made a layup midway through the first half. Iowa State used an 8-0 run to trim the margin to 24-22 but trailed the Jayhawks 30-24 at the break.

“David shot the ball great,” Kansas coach Bill Self said. “And Dajuan made some ridiculously hard layups. It was a good team win.”

A Wilson layup pushed the margin to 40-28 early in the second half. A McCormick jumper kept Kansas in control 56-44, with 6:34 remaining.

Kansas remains the only team with one loss in the Big 12 standings. The Jayhawks were hoping to bounce back from Saturday's 80-62 trouncing by Kentucky. Iowa State was seeking a third straight win after losing four out of five during a midseason slump.

Iowa State: At No. 23 Texas on Saturday, hoping to complete a season sweep of the Longhorns.