No. 13 Auburn gets past UNA, goes 2-0 with Pearl suspended 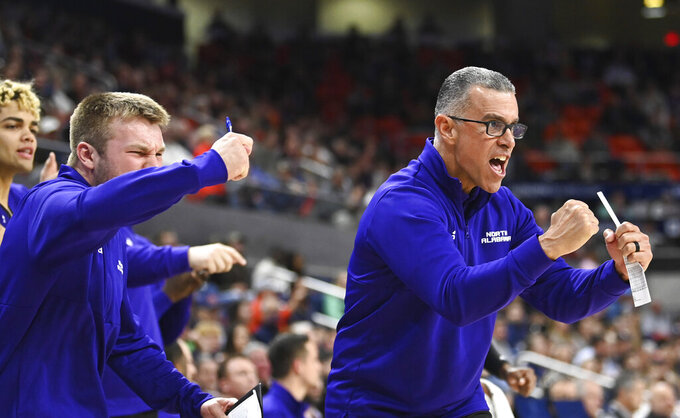 North Alabama head coach Tony Pujol cheers at the end of the first half against Auburn during an NCAA college basketball game Tuesday, Dec. 14, 2021, in Auburn, Ala. (AP Photo/Julie Bennett) 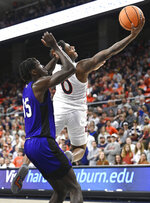 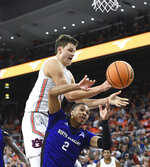 AUBURN, Ala. (AP) — The Auburn Tigers produced two lopsided wins minus coach Bruce Pearl. Now, he's on his way back.

Walker Kessler had 14 points, Jabari Smith and Devan Cambridge each scored 13, and No. 13 Auburn beat North Alabama 70-44 on Tuesday night in the Tigers’ second and final game without their suspended coach.

The Tigers (9-1), who won their sixth straight, didn’t push their lead into double digits until five minutes into the second half but made up for it with a 25-2 run to put away the Lions (6-4).

Auburn completed Pearl’s NCAA-imposed suspension with a second straight blowout. His son, Steven Pearl, served as head coach on Tuesday after Wes Flanigan presided over a 99-68 win Saturday over Nebraska.

“Nobody tried to be Bruce Pearl,” Cambridge said. “They both had their own strategies. They were just themselves.”

Pearl's suspension was part of the NCAA penalties, including four years of probation, imposed on Auburn for unethical conduct involving former associate head coach Chuck Person. Pearl was cited for failing to monitor his assistant and adequately promote compliance.

“It made these two games so much easier because we were just prepared to take on something like this,” he said.

Bruce Pearl wasn't allowed to speak to his staff or players until midnight and his son figured he'd likely be getting a call.

Cambridge scored 10 points in the second half, including a breakaway, reverse dunk during the decisive run off a bounce pass from Green.

“All year I’ve been waiting for a fast-break like that,” Cambridge said. “I was thinking about that the whole game.”

North Alabama scored just 17 points in the second half.

“All the credit goes to coach Steven Pearl and just the way he prepared his team,” Lions coach Tony Pujol said. “Their defense was stifling. Our guys really struggled in the second half.”

Kessler hit three straight inside baskets to finally push the lead into double digits, but it was just the start of Auburn's hot stretch. The Tigers blocked 11 shots.

“The first half we were very sloppy offensively,” Steven Pearl said. “Did a very bad job of executing. Their physicality bothered us.”

North Alabama kept it close most of the way with strong defense in the Lions' second game against a ranked team since moving up to Division I in the 2018-19 season.

Auburn, which jumped five spots in the AP Top 25 to its highest ranking of the season this week, started slowly and only led 32-27 at halftime.

Key Auburn reserve Jaylin Williams was out of the game with turf toe. The forward is averaging 7.9 points per game. Pearl said he got out of his boot Tuesday and is hopeful for the next game.