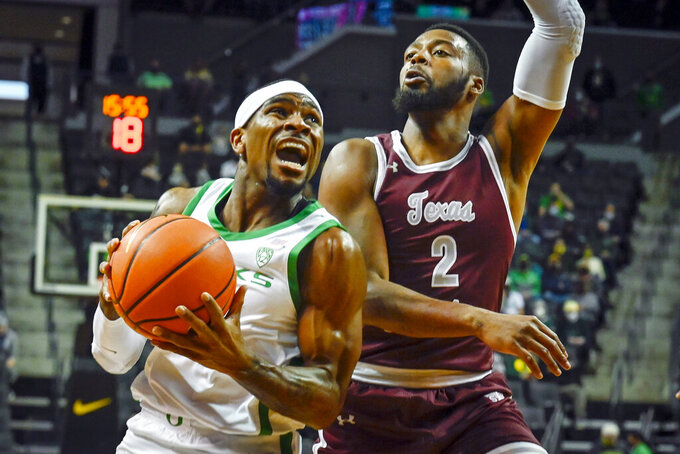 EUGENE, Ore. (AP) — Will Richardson scored 20 points and No. 13 Oregon opened the season with an 83-66 victory over Texas Southern on Tuesday.

De'Vion Harmon added 15 points and Jacob Young had 14 for the Ducks, who led by as many as 23 points in the second half.

John Walker III led the Tigers with 19 points and PJ Henry had 10.

“We started jelling together in the second half,” Young said. “We started moving it faster and started hitting shots and that just carried on and then we just kept going in the second half. We pushed the big lead out and we just started getting comfortable from there.”

Both teams played in the NCAA Tournament last season. Oregon went 21–7 overall and reached the Sweet 16 for the fifth time under coach Dana Altman.

Texas Southern went 17-9 and won the Southwestern Athletic Conference tournament. The Tigers defeated Mount St. Mary’s in the First Four and then lost to Michigan.

A newcomer for Texas Southern is freshman Shaqir O’Neal, the youngest son of Shaquille O’Neal, but he did not play on Tuesday.

The Tigers stayed close in the in the opening half, but Oregon began to pull away in the final five minutes.

Oregon pushed the lead to 34-22 with just over a minute remaining in the half on Richardson's 3-pointer. The Ducks led 36-26 at the break.

Oregon opened the second half with a 10-2 run and led by 46-30 after Richardson's tip-in with 16:22 left. Richardson averaged 11.3 points and 3.9 assists last season but missed time because of injury.

“I like the depth of this team. I like the guys. I think if they become a cohesive unit defensively and offensively, that we can have a good team," Altman said. “But it’s totally gonna be their decision — how unselfish are we going to be? How are we gonna play together? If I have an off night, am I going to try and make plays for my teammates?”

Texas Southern beat the Ducks in 2018. It was the Tigers’ lone win in four previous meetings, but it was enough to make the Ducks a bit leery.

"I didn’t know what to expect. I was nervous as all get out," Altman said. “You know our history with these guys. They’ve got 10 seniors and grad students on their team. They’re a team that finished really strong they won a game in the NCAA Tournament. ... So I was nervous, and very concerned going in because we hadn’t practiced as well as as I had hoped.”

Texas Southern: Coach Johnny Jones is embarking on his fourth season. ... The Tigers were selected to finish atop the SWAC in the preseason rankings.

Oregon: The Ducks are still about a month away from the return of 6-foot-11 center N’Faly Dante, who played in six games last season before an ACL injury. ... The Ducks were picked to finish second in the Pac-12, behind UCLA, which went to the Final Four last season. ... Jacob Young is the younger brother of former Oregon player Joe Young.