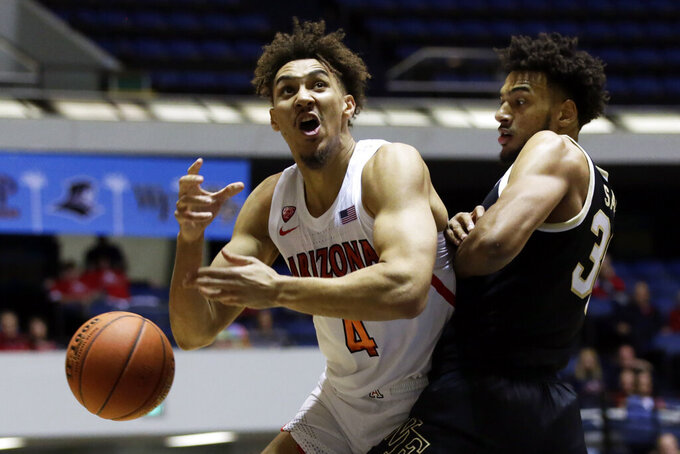 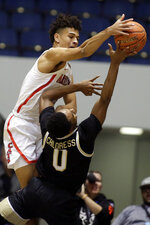 ANAHEIM, Calif. (AP) — Arizona’s talented freshmen have led the way early, but on Sunday night in the Wooden Legacy championship game it was a pair of seniors who stood out for the 14th-ranked Wildcats.

Dylan Smith scored 20 points and Chase Jeter added 17 points and nine rebounds in a 73-66 victory over Wake Forest on Sunday night. It is Arizona’s first early season tournament title since 2014, when it won the Maui Invitational.

“Our younger guys get a lot notoriety because they have been great additions, but if Dylan and Chase didn’t play the way they did I don’t know if we would have won tonight,” coach Sean Miller said.

Arizona — which is 8-0 for the first time in five seasons — shot 58% or better in wins over Pepperdine and Penn but was a season-low 43.1% from the field (25 of 58) against Wake. However, it had a 36-18 advantage in points in the paint and outrebounded the Demon Deacons by five.

“The offensive glass helped us. Chase was getting the rebounds and either going to the basket or kicking it out for open shots,” Smith said.

The Wildcats (9-0) led most of the game with their largest advantage being 56-41 eight minutes into the second half. Jeter scored seven points and Smith added four during the early parts of the half.

The Demon Deacons (5-3) had a 14-4 run to get within 68-64 with 43 seconds remaining but could not draw closer. Arizona closed the game making five of its last six free throws.

“Jeter and Smith were the guys that we wanted to force to make shots and they did,” Wake Forest coach Danny Manning said. “I thought we had some chances but did not string together enough shots.”

Arizona was out in front for the first six minutes before Wake Forest scored 10 straight points to take a 23-16 lead with 11:23 remaining in the first half. The Demon Deacons’ lead was short-lived as the Wildcats went on a 14-0 run. Max Hazzard, a graduate transfer from nearby UC-Irvine, started the rally with two straight 3-pointers.

Arizona extended its lead to 37-27 with three minutes left before Wake scored six of the last eight points in the half to cut it to 39-33 at halftime.

Arizona’s Nico Mannion was named the tournament’s MVP. The freshman point guard hit the game-winning shot against Pepperdine on Thursday and scored 24 against Penn on Friday but was held to nine against Wake. He did hit a jumper with 1:51 remaining off a timeout to push Arizona’s lead to 68-61.

Arizona: The young Wildcats showed they can win away from the McKale Center with three wins in four days. A tournament win is big for any school, but it does carry an extra dose of confidence for a team with eight newcomers.

“In each of these games we showed some good things and then a number of areas where we have to grow,” Miller said. “We can take these wins and feel better about ourselves.”

Wake Forest: The Demon Deacons were playing in the final of a November/December tournament for the first time since 2008, when they won the 76 Classic in Anaheim. That tournament would merge with the Wooden Legacy starting in 2013.

Arizona: At Baylor on Saturday.