No. 14 Nevada rallies to beat Boise State in MWC quarters 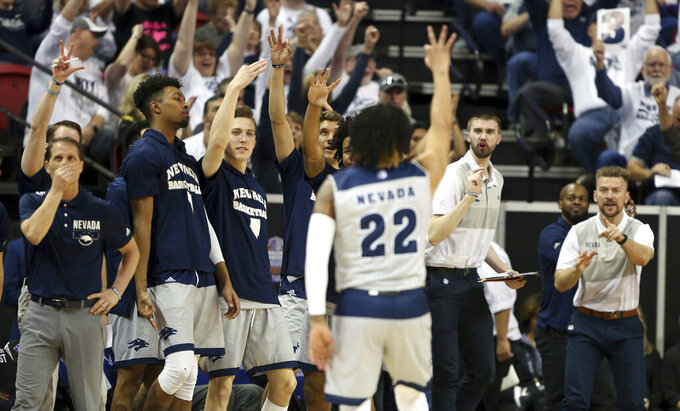 The Nevada bench reacts after Nevada's Jazz Johnson (22) sunk a 3-point shot during the second half of an NCAA college basketball game against Boise State in the Mountain West Conference men's tournament Thursday, March 14, 2019, in Las Vegas. (AP Photo/Isaac Brekken)

After trailing Boise State by 15 points in the first half, the Wolf Pack slowly responded. And not until the final minute of the game — did they feel comfortable.

Tre'Shawn Thurman added 17 points, and Cody Martin had 10 to help top-seeded Nevada (29-3) tie the school record for victories in a season. The Wolf Pack will face San Diego State in the semifinals Friday night.

"We stunk for the first 12 minutes of the game," Nevada coach Eric Musselman said. "It was hard to watch. I'd rather go the dentist and get some teeth pulled. But the thing with our ballclub is down 15, no panic. We've been in those situations where we've gotten down and figured away to come from behind on a big stage. At halftime, we got our minds cleared."

"In the three games we lost, we never found that spurt," Musselman said. "Today, we found that spurt. I want to compliment (Boise State) coach Leon Rice, he had them over prepared. They didn't back down."

After the Wolf Pack took a 57-50 lead with 9:33 left, the Broncos went on a 10-0 run. Nevada took the lead for good on Cody Martin's jumper with 3:37 left. The Wolf Pack slowly pulled away, converting all eight free throws in the final 51 seconds.

The Broncos hung around thanks to 8-of-17 shooting from 3-point range and an 11-of-13 mark from the free-throw line.

"Nevada has big-time tough guys, big-time character," said Rice, who now looks ahead to next season. "(As for the season), there were positives. A lot of teams would be able to do what went through. We got our hearts ripped out many times. We competed night in and night out. (Alston and Jessup) have some great days ahead of them. That's a heck of a cornerstone going ahead."

Nevada: The comeback win was tied the team's season mark from 15, also rallying against then No. 20 Arizona in December. Coach Eric Musselman is 6-2 in the MWC tournament.

Nevada will face the San Diego State in the semifinals Friday. The Aztecs beat UNLV 63-55.