No. 14 Villanova tops Creighton in OT for 10-0 Big East mark 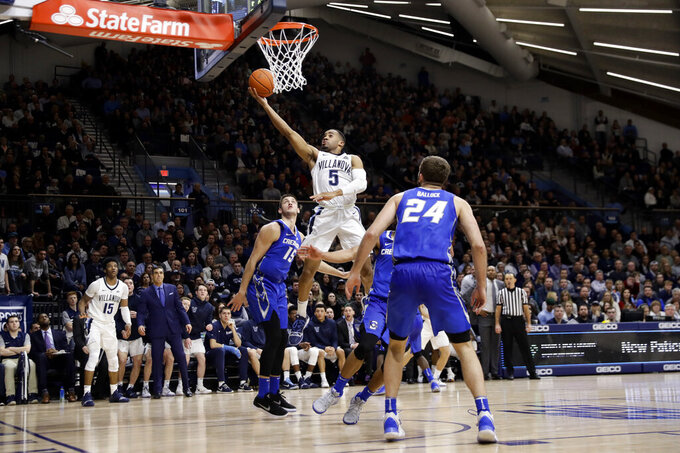 Villanova's Phil Booth (5) goes up for a shot as Creighton's Martin Krampelj (15) and Mitch Ballock (24) watch during the second half of an NCAA college basketball game Wednesday, Feb. 6, 2019, in Villanova, Pa. Villanova won 66-59 in overtime. (AP Photo/Matt Slocum) 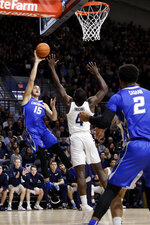 VILLANOVA, Pa. (AP) — After losing four top players to the NBA, this was supposed to be something close to a rebuilding season for Villanova.

There's no such thing for coach Jay Wright and the Wildcats.

Booth finished with 14 points and eight rebounds while Eric Paschall scored 15 and Collin Gillespie had 13 for the Wildcats (19-4, 10-0), who have won their first 10 Big East games for the first time in program history. Their previous best start in league play came in 2009-10 when they opened 9-0.

"On nights when you're not at your best and you can still find a way," Wright said, "that's a good team."

The defending national champions also became the first Big East team to start 10-0 in conference games since UConn won its first 11 on the way to the 1999 national title.

"You don't start 10-0 in this league unless you're special," Creighton coach Greg McDermott said.

Davion Mintz led Creighton (13-10, 4-6) with 19 points and Martin Krampelj had 13 points and 10 rebounds. The Bluejays were missing two starters after top scorer Ty-Shon Alexander was injured in practice Tuesday. He joined Marcus Zegarowski (broken hand) in street clothes on the bench.

Despite playing short-handed, Creighton stayed right with Villanova in a back-and-forth game that featured 10 ties and eight lead changes. But the Wildcats put the clamps down in overtime, all but sealing the win on Booth's 3-pointer with 1:25 left.

The game was tied at 45 with 4:30 left in regulation when Mintz drilled a tough 3 to put Creighton ahead. Booth made two straight buckets to put Villanova back in front, before Creighton's Kaleb Joseph was fouled on a 3-point attempt with 37 seconds remaining. He hit one of three foul shots to tie the game at 49.

Krampelj swatted a go-ahead attempt from Booth with 11 seconds left, giving Creighton a shot to win at the end of regulation. Joseph's jumper rimmed out at the buzzer, sending the game to overtime.

"They played extremely well," Wright said. "We didn't and we were able to gut it out with some great effort plays down the stretch."

Creighton: The Bluejays, who have played one of the nation's toughest schedules, remain in the middle of the pack in the conference.

Villanova: Looking for their fifth Big East regular-season title in six years, the Wildcats are in essentially a two-horse race with Marquette. They have a two-game lead on the Golden Eagles with eight to play.

Normally one of the top 3-point shooting teams in the country, the Bluejays went just 5 for 17 from behind the arc. But they outscored Villanova 32-18 in the paint and were especially impressive on defense, holding the Wildcats to 37.5 percent shooting.

"I told the guys that we were really connected," McDermott said. "There was a level of belief you have to have when you're undermanned. You really have to have each other's backs."

Wright said the biggest plays of the game were two offensive rebounds by Dhamir Cosby-Roundtree in overtime. One followed a missed free throw by Gillespie, with Cosby-Roundtree slamming home the putback to give Villanova a 55-52 lead with just under three minutes left.

Cosby-Roundtree and Bey each finished with four offensive rebounds in front of a loud Finneran Pavilion crowd. Villanova was playing on campus for the first time since Jan. 8 after six straight games either on the road or at their off-campus home at the Wells Fargo Center.

"Everyone was dialing it up," Bey said. "I was just feeding off the energy."

Creighton faces Seton Hall on Saturday night in the second stop on a three-game road trip.

Villanova heads to Marquette on Saturday afternoon for a showdown between the league's top two teams.