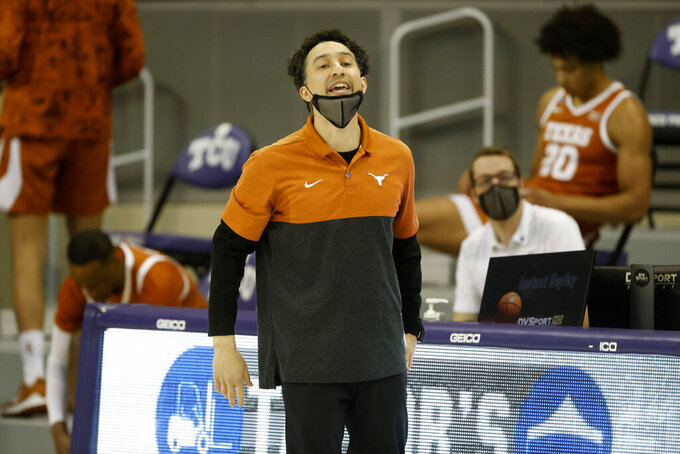 Texas head coach Shaka Smart directs his team against TCU during the first half of an NCAA college basketball game in Fort Worth, Texas, Sunday, March 7, 2021. (AP Photo/Michael Ainsworth) 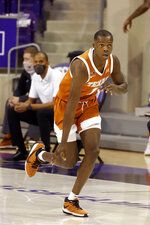 FORT WORTH, Texas (AP) — Andrew Jones and the Texas Longhorns took a busy bonus week of Big 12 road games and turned it into momentum for the postseason.

Jones scored 16 points while making all four of his 3-pointers, and No. 15 Texas finished the regular season with a third consecutive road victory, beating TCU 76-64 on Sunday night.

Three games in six days to account for COVID-19 and weather postponements were a boon for the Longhorns (17-7, 11-6 Big 12). They also won at Iowa State and 15th-ranked Oklahoma to reach 9-2 away from home and 6-2 in true road games.

Matt Coleman III scored 14 points and Courtney Ramey had 13 points and six assists for Texas, which moved up to the third seed in the Big 12 tournament and will face No. 18 Texas Tech, the sixth seed, in the quarterfinals Thursday.

“It’s hard to win three road games in one week,” Coleman said. “The travel is not easy. Playing on the road in the Big 12 is not easy. But we were able to find a way and do what we do.”

After starting 1 of 6 from 3-point range, the Longhorns were 10 of 17 the rest of the way to finish at 48%. That included a trio of long 3s from Ramey early in the second half as Texas, which shot 54% overall, stretched its lead to nine.

Once the Longhorns built a cushion with 3-point shooting, they kept it by continuing to hit shots from beyond the arc. Ramey, Jones and Coleman combined to go 9 of 14 from deep.

“It’s always good for us to click on the same page, everybody shooting a high percentage, making the right play,” Jones said. “That’s what we need in order to make a run.”

The Horned Frogs kept pace from long range for most of the game before fading and finishing 8 of 21. TCU tied a season high with 22 turnovers, leading to a 22-12 advantage for Texas in points off turnovers.

“In some ways I think we’ve gotten better offensively and then we go and turn it over 22 times,” coach Jamie Dixon said. “We've got to be more consistent and more effective in finishing plays. The turnovers are hurting our defense.”

Jericho Sims scored 13 points on 6-of-7 shooting and Kai Jones added 10, with fellow big man Greg Brown helping both get dunks while recording a career-high four assists. Texas had a season-high 20 assists.

“The guys did a good job sharing the ball with each other,” Texas coach Shaka Smart said. “This was one of best games of passing and creating for each other.”

Texas: The Longhorns have found a groove after COVID-19 disrupted their season in late January. They're 6-2 since a double-overtime loss at No. 17 Oklahoma State a month ago. Texas had late-season momentum last season as well, before the coronavirus shutdown. A five-game winning streak included three road victories.

TCU: Dixon, who is in his fifth season at his alma mater, hasn't had a losing season in 18 years as a head coach. The Horned Frogs will have to win twice in the Big 12 tournament for him to avoid his first. Dixon also has never gone winless in Top 25 games as a coach. TCU would get another chance in the Big 12 quarterfinals with a first-round win.

The Texas freshman slightly tarnished a strong overall game by missing a between-the-legs dunk on a breakaway off his steal with the Longhorns leading comfortably in the second half, a highlight play he pulled off in high school.

Smart said he wanted to take Brown out, but said Ramey talked him into letting Brown stay in the game. Later, Jones assisted on an easy Brown bucket.

“I just wanted him to feel good and get his spirits up,” Jones said. “I know he missed a highlight dunk. I just want to keep him engaged and continue to let him have fun with the game.”

Texas: The Longhorns have lost five of six to Texas Tech, including twice this season. The first was 79-77 in Austin when Texas Tech's Mac McClung hit a 3-pointer in the final seconds.

TCU: The Horned Frogs are the No. 8 seed will play ninth-seeded Kansas State in the first round of the Big 12 tournament Wednesday.