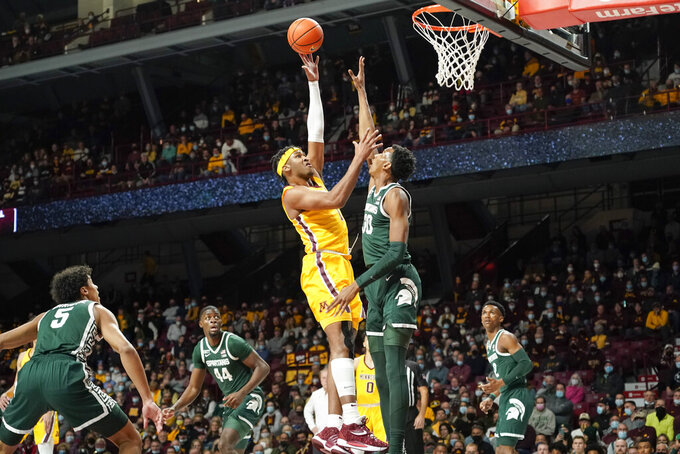 MINNEAPOLIS (AP) — Michigan State is playing tough defense again, and the arrival of Tyson Walker is not a coincidence.

Gabe Brown, Malik Hall and Walker scored 15 points apiece for 19th-ranked Michigan State in a 75-67 victory over Minnesota on Wednesday night in the first Big Ten opener for Gophers coach Ben Johnson and the 27th for Spartans coach Tom Izzo.

Brown had three 3-pointers as the Spartans went 10 for 21 from long range against a Gophers team that entered the game with the best 3-point defense in the nation at 23.1% allowed. Walker hit both of his tries from deep.

They won it on the other end, though. Hall (nine) and Brown (eight) fueled a 44-29 rebounding advantage by the Spartans (8-2, 1-0), who were humiliated at Williams Arena a year ago in an 81-56 defeat that Izzo and his staff made sure to remind them of this week.

Walker, the transfer from Northeastern who was the Colonial Athletic Association Defensive Player of the Year last season, held Minnesota’s Payton Willis to nine points on 3-for-13 shooting after he scored 24 points in a win at Mississippi State on Sunday.

“Tyson’s the head honcho of the group, so we just follow his lead,” Brown said.

Said Izzo: “The more he gets after people and talks to them on the floor and runs my team, the better we’re going to be.”

Sixth-year senior Eric Curry had a career-high 18 points and Jamison Battle scored 17 points for the Gophers (7-1, 0-1), whose feel-good start in Johnson’s debut was hit with a reality check from the stronger and deeper Spartans. Minnesota was one of only 12 remaining undefeated NCAA Division 1 teams when the day began.

Minnesota made a game of it by holding the Spartans to one basket over the final 4 1/2 minutes, a 3-pointer by Brown after the Gophers got within 64-55 at the last media timeout on a steal-dunk sequence by Sean Sutherlin.

The Gophers missed 13 of their first 16 shots, and not without hustle or creativity. The Spartans simply clamped down on the driving lanes and were there to grab the rebounds when the 3-pointers rimmed out. E.J. Stephens found an open hoop off of a crisp pick-and-roll, only to have his finger roll swatted into the seats by Brown.

“It was all about stopping dribble-drives and closing out on shooters, because they can really shoot. We did a great job of not letting them get in the paint and kick out,” Walker said.

Hauser had 10 points, seven rebounds and tight defense on Battle — the sixth-leading scorer in the Big Ten entering the game. The sophomore's first basket came with 8:59 left before halftime, a 3-pointer from the top of the key that cut Michigan State's lead to 17-15. The Spartans snapped right back with a 25-9 spurt that stretched into the second half. Hauser hit a 3-pointer to give the Spartans their largest lead, 58-39, with 11:26 to go.

“When you’ve got to put all the energy into getting back into the game, it’s hard,” Johnson said. "They don’t make many mistakes.

Izzo and Johnson first met 25 years ago, when Johnson was a sophomore point guard at DeLaSalle High School in Minneapolis and Izzo started recruiting him for Michigan State. Johnson ultimately picked Northwestern, where he played two seasons before transferring to Minnesota.

Izzo quickly extended congratulations and advice when Johnson was hired this spring. He said this week that Johnson would be his early choice for Big Ten Coach of the Year.

Michigan State: Games like this are exactly why Izzo loads up his early slate with national powers. The Spartans have the strongest schedule among all major conference teams, according to NCAA calculations. Losses to No. 8 Kansas and No. 2 Baylor might have hurt their record, but they helped their cause in a Big Ten road game after starting 0-3 in league play last season.

Minnesota: The Gophers will have to play near-perfect games to beat the Spartans in the rematch next month, as well as a few other teams in the Big Ten's top tier, but they've got the experience, confidence and chemistry to be competitive in conference play even with five transfers in their seven-man rotation who came from mid or low major programs.

“It’s tough, but we proved tonight that we’re not going to back down from anyone,” Battle said.

Michigan State hosts Penn State on Saturday. The Spartans are 25-2 all-time at home against the Nittany Lions.

Minnesota plays at Michigan on Saturday. The Gophers have lost seven straight games in Ann Arbor, last winning there in 2011.