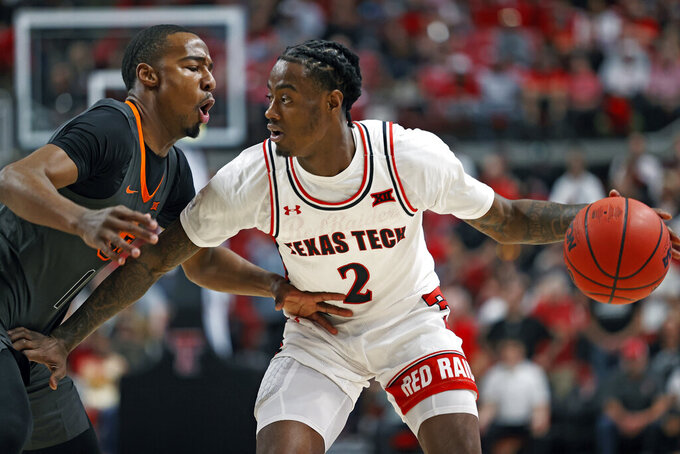 LUBBOCK, Texas (AP) — Kevin Obanor had 17 points and No. 19 Texas Tech backed up its consecutive wins over Top 10 teams with a 78-57 victory over Oklahoma State in a makeup game Thursday night.

“I thought our guys played well,” Tech coach Mark Adams said. “I told our guys after this game I am just as proud of this win as I was the other two and I mean that sincerely. This is a tough game. We played against some very good athletes and a team that’s well-coached."

Adonis Arms scored 13 points, Davion Warren 12 and Bryson Williams 11 for the Red Raiders. Marcus Santos-Silva had 10 points and 10 rebounds in 17 minutes of action.

“Tonight’s really about Texas Tech in all honesty. They played really well and they made us not play as well,” Oklahoma State coach Mike Boynton said. “They’re playing with as much confidence as probably any team in the country considering what they’ve been through in the last week.”

Bryce Thompson had 14 points for Oklahoma State (8-7, 1-3), which has lost six of its last eight games. The Cowboys shot 32% from the field (18 of 56), including nine misses in a row midway through the second half.

After falling behind 10-0 in the first three minutes, Oklahoma State got even at 21-all on a 3-pointer by Bryce Williams with about seven minutes left in the first half. That capped a 21-11 spurt by the Cowboys during which Tech missed 13 of 16 shots.

But the Red Raiders went ahead to stay when Obanor was credited with the tiebreaking basket on goaltending call that started a 21-6 run. Arms then back-to-back 3-pointers.

“They’re probably one of the best teams in the country right now at the level that they’re playing at,” Cowboys guard Isaac Likekele said. “Their intensity was higher than ours today. But as a team, we’ve got to be better.”

The Red Raiders had a 42-27 halftime lead, and led by at least 12 points the rest of the way. The final score matched the largest margin of the game.

“Coach Adams before the game really explained it well about how the last two games we played, and the feeling that we get in the locker room, celebrating with each other after we get a win,” Santos-Silva said. “He said ‘Keep on getting that feeling, keep on going for it.’ He always tells us to picture coming in off a loss and seeing how we would react and get ready by that, saying we don’t want to lose.”

NOT ON NEW YEAR'S

Texas Tech and Oklahoma State were initially supposed to play what was going to be the Big 12 opener for both teams on New Year's Day. That was postponed because of COVID-19 issues in the Cowboys program at the time.

Oklahoma State: The Cowboys beat then-No. 14 Texas 64-51 at home last Saturday, but now have consecutive double-figure losses in a week when they will travel more than 3,200 miles for three road games in five days. It started with a 1,079-mile trip from their Stillwater campus to West Virginia, where the Cowboys lost 70-60 loss Tuesday before going 1,467 miles to Lubbock. They still had about 700 miles left, with a trip to Waco before returning home.

“It’s much more mental than it is physical at this level. It’s not an issue of us needing to go get better players,” Boynton said. “I truly believe the answers are in the locker room. We have the right guys, we’re doing this in short-enough spurts to see that it can be done. We’re just not sustaining it.”

Texas Tech: The Red Raiders, who shot 50% (28 of 56), are 10-0 at home this season. They played their seventh game in a row without Terrence Shannon because of a lingering back issue, though he could return as early as this weekend.

Kevin McCullar hit a 3-pointer on Texas Tech's opening shot, but that was his only made field goal. He finished 1-of-6 overall shooting while playing a team-high 29 minutes. McCullar is still dealing with an ankle issue that forced him to miss the first two Big 12 games.

Texas Tech made only 11 3-pointers in its first three Big 12 games. The Red Raiders had eight 3s (on 14 shots) in the first half against Oklahoma State, but were only 1-of-9 after halftime.

Oklahoma State: At No. 1 Baylor on Saturday.