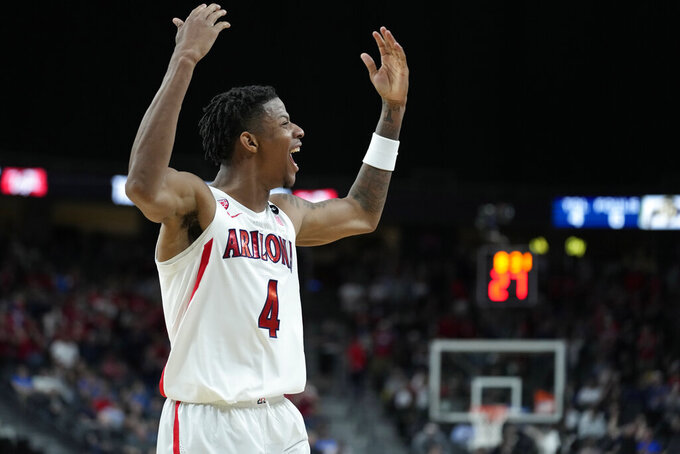 Arizona's Dalen Terry (4) celebrates after a play against Colorado during the first half of an NCAA college basketball game in the semifinal round of the Pac-12 tournament Friday, March 11, 2022, in Las Vegas. (AP Photo/John Locher)

LAS VEGAS (AP) — Kerr Kriisa handed his crutch to a teammate and grabbed the red Arizona sticker. The Wildcats' point guard lifted it in the air, let out a shout and placed it on the championship slot of the Pac-12 Tournament bracket inside T-Mobile Arizona.

Even missing a key piece, Arizona has enough pieces to make up the difference.

Azoulas Tubelis had 20 points and 11 rebounds, Justin Kier added 13 points in Kriisa's place and No. 2 Arizona pulled away late to beat Colorado 82-72 Friday night in the Pac-12 Tournament semifinals.

“I knew I had to come out, do what I needed to do for the team,” said Kier, who had five rebounds and three assists. “I had to fill the spot with Kerr. These guys give me the most confidence in the world. When I get confidence from them, that’s all I need.”

Kriisa sprained his right ankle in the closing seconds of an 84-80 win over Stanford in the quarterfinals and spent the game leaning on a crutch, his foot in a walking boot.

The top-seeded Wildcats (30-3) had a good offensive flow in the first half with Kier running the show, but weren't nearly as efficient through most of the second.

Arizona kept the Buffaloes at bay with its defense and gradually stretched the in the closing minutes, using a 7-0 run to go up 78-65 with just over a minute left. The Wildcats will play the No. 13 UCLA in the title game Saturday night.

“I want to give my staff a ton of credit,” Arizona coach Tommy Lloyd said. “We did some things we’re not traditionally comfortable with today. Those are emotional things, what those guys mean to me, but they had some great ideas and we hung with it.”

No. 4 seed Colorado set a Pac-12 record with 16 3-pointers, but went 8 for 30 on 2-pointers to miss out on a chance to play in consecutive Pac-12 title games. The Buffaloes went on a 12-2 run to erase a nine-point halftime deficit, but went into an offensive funk as Arizona started to stretch the lead.

Colorado also shot just 10 free throws — it averages 18 per game — while Arizona went 24 of 25 from the line. Jabari Walker led the Buffaloes with 19 points, but had just two in the second half.

“We had trouble finishing against their length,” Colorado coach Tad Boyle said. “The game was physical tonight, just like it was in Boulder. But we weren’t able to get to the foul line for whatever reason and we weren’t able to finish.”

The Wildcats and Buffaloes split the regular-season series, each winning blowouts at home with dominating second halves.

The third meeting was also close at halftime — and an offensive Vegas show.

Colorado hit seven of its first nine shots to go up eight early, went through a brief funk and went 9 of 15 from 3 in the first half. Walker hit all five of his 3-pointers and had 17 points.

“We knew from last year he was a good three-point shooter,” Boyle said. “I told Jabari, as long as you’re taking good 3s, I want you to keep letting it fly and he’s done that.”

The Wildcats had no drop in efficiency with Kriisa in a walking boot, working its inside-out game to near perfection while hitting 17 of 28 shots.

Tubelis was their go-to player, scoring 18 points, mostly in the post and on short jumpers. He jumped a passing lane for a steal and finished off a three-point play with 3 seconds left to give Arizona a 47-38 halftime lead.

Colorado was the Pac-12's best 3-point shooting team during the regular season and upped its pace in the Pac-12 semifinals. The Buffaloes just weren't good enough inside the arc and now have to hope their resume is good enough to earn an NCAA Tournament bid.

Arizona had some offensive issues in the second half after lighting it up in the first, but locked down Colorado down the stretch to earn its first trip to the Pac-12 title game since 2018.

Kriisa was in a lot of pain and couldn't put any weight on his right leg after going down against Stanford. He left the arena in a wheelchair and didn't play against Colorado, but Lloyd was optimistic the Estonian guard would be available for the NCAA Tournament.

“I think playing him next week is a real possibility,” Lloyd said. “We just got to take it day-by-day. All the major stuff checked out OK. Now it’s just a matter of attacking it.”

Colorado: Could have some anxious moments on Selection Sunday as it awaits its postseason fate.

Arizona: Moves on to face USC or UCLA in the championship game Saturday.