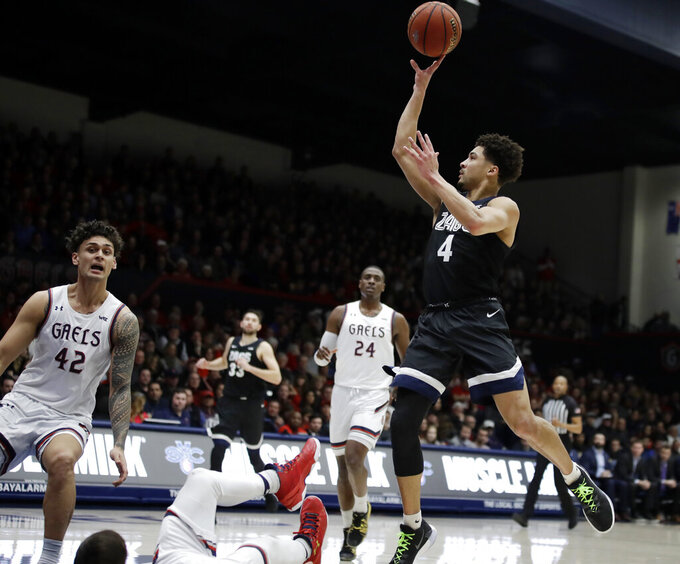 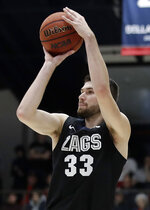 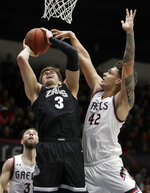 It added up to a surprising blowout in what usually is a tightly contested rivalry.

Drew Timme scored 20 points and No. 2 Gonzaga made 14 of its first 15 shots to send Saint Mary's to its worst home loss in 19 years with a 90-60 victory on Saturday night.

“To come in here in this building with that crowd. That's a really, really good basketball team,” Few said. “They've been winning and execute well. They have good size. They make you make shots and we were able to make shots. We feel really good about getting out of here with a win like that.”

The Bulldogs (25-1, 11-0 WCC) turned the highly anticipated showdown between the fierce rivals into a laugher by taking a 20-point lead midway through the first half and never really letting up after that.

This was the first meeting between the teams since the Gaels shocked the top-ranked Bulldogs 60-47 in the conference tournament final last March. There would be no repeat performance this time for Saint Mary's (20-6, 7-4).

The Zags took control with a 22-2 run in the first half. They held the Gaels without a basket for a span of more than seven minutes and missed only one shot of their own in the first 12:35.

Even that miss turned into a basket with Timme getting the rebound and putback on a missed shot by Corey Kispert.

“We just took great shots every time,” forward Killian Tillie said. “We knew if we were patient we could have any shot we wanted. We did a great job at the start.”

Timme started the big run with five straight points and Tillie hit two 3-pointers during the stretch in his first game back after missing two games with a sprained ankle. Kispert's jumper capped the run and made it 34-12.

Gonzaga: About the only thing the Bulldogs didn't do well was protect the ball. They turned the ball over seven times in the opening eight minutes but that didn't matter much at all the way they shot. Admon Gilder's 3-pointer before the first-half buzzer in front of the Saint Mary's bench made it 53-28 at the break.

Saint Mary's: The Gaels missed a chance at the type of quality win that could be crucial when it comes to selection time for the NCAA tournament. Saint Mary's already has four losses in the WCC with a trip to Gonzaga still left. The most conference losses the Gaels have ever had in a season they earned an at-large tournament bid was three in 2004-05.

The win extended some impressive streaks for the Bulldogs. They have won 17 straight games overall since losing to Michigan on Nov. 29 in the Bahamas and have also won 38 straight regular-season conference games, the longest active streak in the country. The victory also gave the Zags their 13th straight 25-win season.