No. 22 Auburn shakes off Missouri 81-71 at SEC Tournament 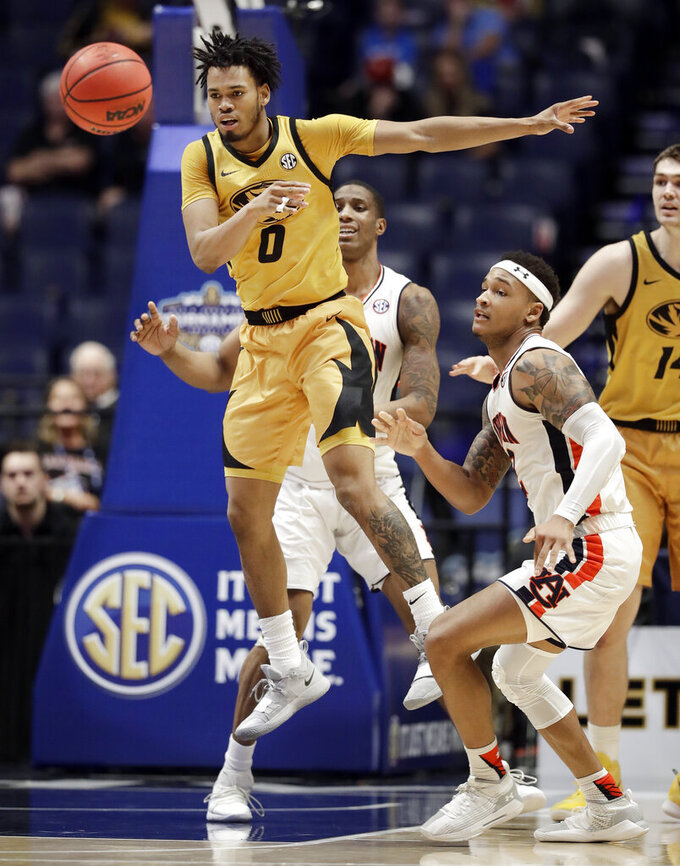 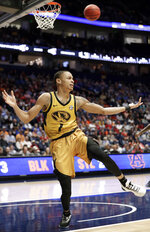 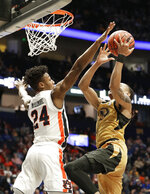 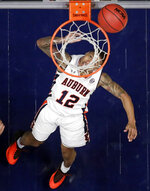 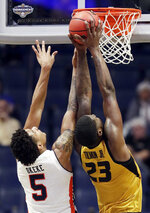 NASHVILLE, Tenn. (AP) — Auburn guard Bryce Brown had to wait until his senior season to experience a victory at the Southeastern Conference Tournament.

Now he and his teammates want more.

Brown scored all 17 of his points in the second half, and No. 22 Auburn beat Missouri 81-71 Thursday in the second round of the Southeastern Conference Tournament.

Auburn (23-9) won its fifth straight to advance to the quarterfinals Friday against fourth-seeded South Carolina, and the Tigers also snapped a three-game skid at the SEC tournament dating back to 2015 when they reached the semifinals. That was before Brown arrived on campus.

"It definitely felt good to get our first SEC win," Brown said. "It took me four years, my fourth match, my fourth year. ... Me and Horace (Spencer) are going to do everything we can to make sure this team doesn't go out on a sad note. We just want to end our senior season on a strong note."

No. 12 seed Missouri (15-17) at least kept this game closer than the last game between these teams, a 34-point loss in Auburn on Jan. 30, and they even led by as much as four in the first half.

"I thought we were there, just didn't have enough to get over the hump," Missouri coach Cuonzo Martin said.

Auburn had to shake off a cold-shooting start by guards Jared Harper and Brown as they combined to miss their first 11 shots. Brown finally knocked down his seventh attempt with 16:02 left, and the senior strung together three straight 3s. The last came from the corner in front of his own bench, giving Auburn its biggest lead of the game at 49-39 with 14:44 to go.

"This might be the first big game we've won where Jared Harper didn't have to carry us," Auburn coach Bruce Pearl said. "Missouri did a good job defensively on both Bryce and Jared and a lot of pressure on Jared to run the club, and biggest communicator defensively. He's a leader and just a little off tonight."

Chuma Okeke added 12 points for Auburn. Spencer had 11 points and 10 rebounds, and Malik Dunbar had 11 each.

Jordan Geist had a game-high 25 points for Missouri, and Torrence Watson matched his career high with 20.

Missouri kept Auburn from running away this time by shooting away outside the arc and making a season-high 15 3-pointers. Geist finished 6 of 9 from 3 himself and said the Tigers' confidence has really grown the past couple games.

"We were taking what they were giving us and shooting the ball with confidence," Geist said.

Auburn led 32-30 at halftime after Missouri made eight of its nine baskets outside the arc, and Xavier Pinson added a ninth to open the second and put Missouri back ahead. Missouri hit seven straight shots, the last a pair of 3s by Geist and then Watson's, which tied it at 52 with 11:20 to go.

Spencer scored on a three-point play, Danjel Purifoy hit a 3 and Brown added his fourth 3 with 8:16 remaining to cap a quick 9-0 spurt. Missouri couldn't get closer than four down the stretch but didn't let Auburn lead by more than 10.

Missouri: These Tigers head home waiting for next year and the chance to win more than just once at the SEC tournament. Missouri has never won back-to-back games since joining this league for the 2012-13 season, but at least coach Martin leaves Nashville with the program's fourth SEC tournament win. But a couple key freshmen struggled with Javon Pickett held scoreless and Pinson struggling with eight turnovers.

Auburn: The Tigers will need more from Harper and Brown moving forward. Brown did hit all four of his 3-point attempts in the second half. But their defense came through, converting 14 turnovers into a 24-17 scoring edge. They also dominated inside, outscoring Missouri 30-16 in the paint.

"Frank Martin's got my number," Pearl said of facing South Carolina next. "Not just my phone number, but my number."

Missouri: The offseason. Martin said he would not accept an invite to the CBI tournament.

Auburn: South Carolina on Friday in the SEC quarterfinals.