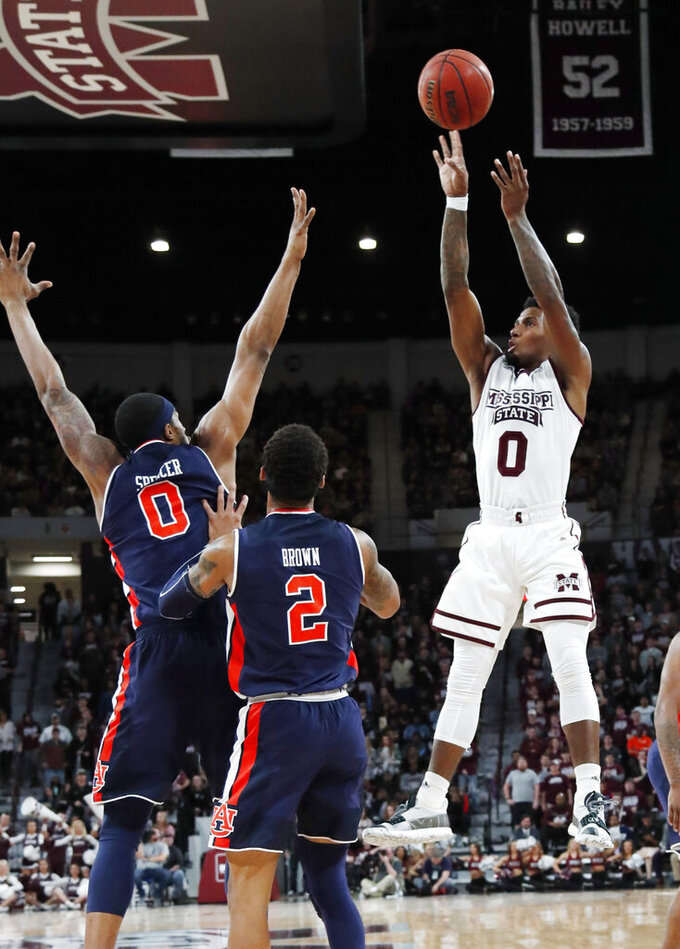 STARKVILLE, Miss. (AP) — Quinndary Weatherspoon had one of his best games of the season when Mississippi State had to have it, tying a season high with 27 points in the No. 22 Bulldogs' 92-84 victory over No. 16 Auburn on Saturday night.

But the senior didn't want to talk about his performance, focusing instead on the team's overall stats like 51 percent shooting and 20 assists on 28 field goals.

The Bulldogs did get contributions from all over the roster, but it was the 6-foot-4 Weatherspoon who hit a big share of the clutch shots in the second half when Mississippi State went on its decisive run. The senior — who has more than 1,700 career points — finished 6 of 9 from the field and 11 of 11 on free throws.

"I just wanted to let the game come to me," Peters said. "Not just force shots, play under control and be a point guard for my team."

Auburn and Mississippi State (15-4, 3-3 Southeastern Conference) were locked in a tight game for much of the second half before Mississippi State broke a 70-70 tie with Weatherspoon's 3-pointer and Reggie Perry's dunk in quick succession.

An irate Auburn coach Bruce Pearl was called for a technical foul after arguing with officials and Weatherspoon hit two free throws to give the Bulldogs a 77-70 lead with 7:13 left.

"When we play the way we played today, it's really fun to be a part of it," Mississippi State coach Ben Howland said. "Because we have so good passers and guys who can create for others."

Bryce Brown led Auburn with 18 points. Chuma Okeke had 16 and Jared Harper added 15. The Tigers were hurt by 19 turnovers.

"When you score 84 points you should have a chance to win that basketball game," Pearl said. "But they really dominated us on the offensive side."

Mississippi State took a 47-45 halftime lead after making 10 3-pointers in the first half. Auburn stayed close thanks to a 14-of-14 performance on free throws. Peters had 12 points for the Bulldogs before the break while Auburn's Harper and Brown both scored nine.

Auburn: The Tigers continued to struggle without 6-foot-11 forward Austin Wiley, who has missed the past three games with a lower leg injury. Auburn was projected as one of the best teams in the SEC, but the Tigers have put themselves in a hole as February approaches.

"No excuses," Pearl said. "We've got good players at those positions. Austin's been out three games. I think we're 0-3 without him. We've got to find a way to win without him."

Mississippi State: The Bulldogs really needed this win at home and got it with a gritty performance in the second half. Weatherspoon was excellent and Perry's 10-point, 11-rebound performance was important in the post. Nick Weatherspoon had 12 points on 5 of 8 shooting and played excellent perimeter defense.

"This was huge for us," Howland said. "I was really proud of our team tonight. I thought we came out with a lot of passion."