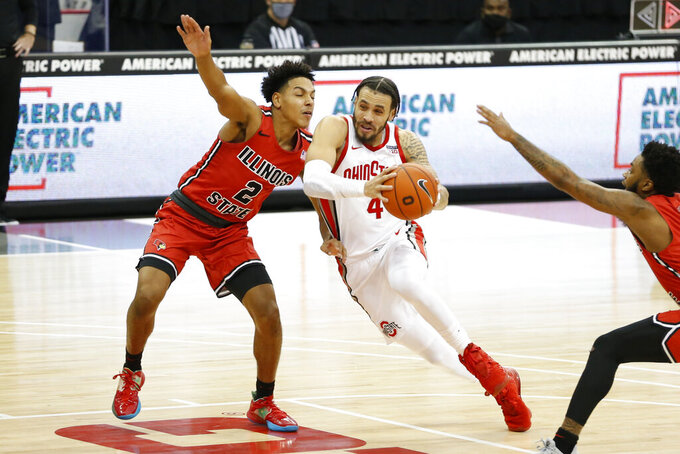 COLUMBUS, Ohio (AP) — Justice Sueing scored 19 points and No. 23 Ohio State scored the first 22 points en route to a 94-67 win over Illinois State on Wednesday in the season opener for both teams.

Due to COVID-19 concerns, the game was played before about 100 school officials and media inside 19,100-seat Value City Arena.

The Buckeyes created their own energy as Sueing, making his Ohio State debut after transferring and sitting out a year, had seven points in the team’s opening surge. He was 8 of 9 from the floor in his first game since leaving California, where he averaged 14 points and six rebounds as a sophomore in 2018-19.

“It’s great to be out here with my guys,” said Sueing, who also missed practice time last winter with a foot injury. “It was a long time sitting out. As soon as I got out there, I was able to play off my teammates and jell with them. I’m just excited to see what we can do this year.”

E.J. Liddell had 16 points while Duane Washington and freshman Zed Key each scored 12 for the Buckeyes. Key also had five rebounds. C.J. Walker chipped in 10 points and six assists.

“I’m not real surprised, to be honest,” Illinois State coach Dan Muller said. “We’re not ready to be a good team yet. Part of it is missing two weeks of practice (due to COVID-19), but part of it is our guys don’t believe the coaches when we say how hard you have to play. I do think we’ll grow a lot from this.”

The Buckeyes led by as many as 24 points in the first half before settling for a 42-25 halftime lead. The lead went as high as 37 points with just over six minutes left.

Ohio State coach Chris Holtmann was concerned about his team’s defense coming into the season. But the Buckeyes forced the Redbirds to miss their first nine shots in building their early lead.

“This was a good first start for our guys,” Holtmann said. “(Illinois State) came out and missed some shots they would normally make. But I’m proud of our guys’ effort overall. They had really good energy. They were anxious and ready to play.”

Liddell moved into a starting spot at power forward for Ohio State after serving as a backup last year. He opened the game with a jam and then completed a three-point play, scoring both off passes from his teammates. Liddell fed Sueing for back-to-back jams midway through the second half as the Buckeyes pulled away.

“We were sharing the ball very well,” Liddell said. “We went out there and blitzed them and played together.”

Ohio State: The Buckeyes got to see their new-look offense in action, going with more of an open floor look after utilizing center Kaleb Wesson in the post the last three years. Wesson declared for the NBA draft but went undrafted last week. Ohio State was 21-10 and finished fifth in the Big Ten a year ago.

Illinois State: The Redbirds got a chance to see how they match up against a Big Ten opponent and, after the first six minutes, did a few positive things. They were 10-21 and finished ninth in the Missouri Valley Conference last season.

Harvard transfer Seth Towns, still coming back from a knee injury that cost him his last two seasons, was late arriving to the game after being involved in a minor car crash near campus. No one was hurt.

AWAY FOR THE HOLIDAY

Illinois State is spending Thanksgiving weekend in Columbus. The Redbirds will play UMass-Lowell on the Ohio State campus on Saturday. “The location was good for us,” Muller said. “Sometimes it does come down to money. Budget-wise, it was a good trip for us to get two games."