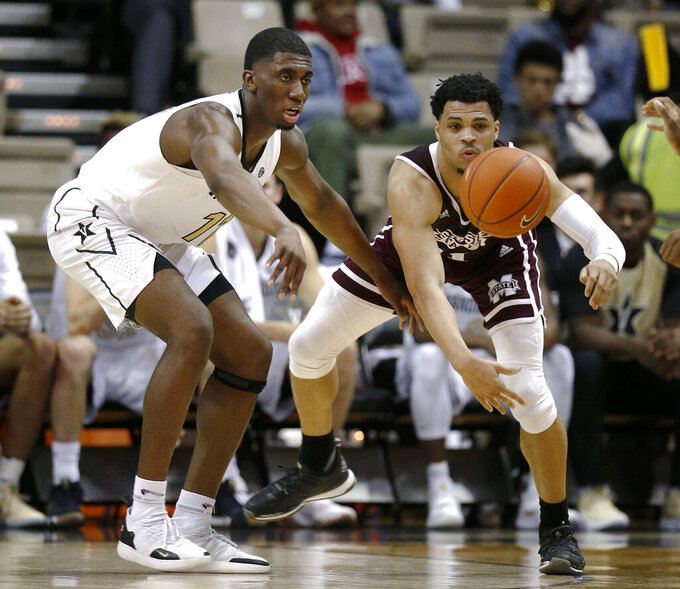 NASHVILLE, Tenn. (AP) — Memorial Gym is not a pleasant place for most opponents to visit, something the Mississippi State Bulldogs know only too well.

That makes leaving with only the program's 10th victory in 57 games at the Southeastern Conference's oldest gym very special.

"Obviously, we're elated about the win," Mississippi State coach Ben Howland said. "To get a road win is so hard to do. And to win in this building, which has not been easy for Mississippi State over the years, was huge."

The Bulldogs (14-3, 2-2 SEC) now have won two straight after dropping their first two games to open league play. They needed this victory as the first of back-to-back road games and part of four of the next five away from Starkville.

"It was very important coming in 1-2," guard Robert Woodard II said. "We needed some momentum to carry us out the rest of the season, so this was a great start getting 50-50, 2-2. So that was a great momentum starter."

The worst start to SEC play in school history has only gotten worse for Vanderbilt (9-8, 0-5).

"Unfortunately I can't create any drills or anything in practice that equals experience, and so a lot of times we do it well in practice and you get into the game and it's usually underclassmen that just don't make the simple play we practiced," Vanderbilt coach Bryce Drew said. "And so again if you have a drill that I can create experience in practice, please pass it on to me."

Mississippi State jumped out to a 10-0 lead and led by 15 during the first half, taking advantage of frigid shooting by the Commodores. Vanderbilt didn't reach double digits until Matt Ryan hit a 3 with 7:24 to go, but the Commodores went on a 13-4 run to pull within 29-23 on a pair of free throws by Lee with 1:47 left.

That was as close as Vandy would get as the Bulldogs scored six straight and led 35-27 at halftime, a lead nearly padded by a buzzer beater. Officials reviewed the shot by Lamar Peters and ruled it came too late.

Not that it mattered. Mississippi State shook off another cold-shooting stretch, with Vanderbilt only able to pull within 39-32 on a jumper by Joe Toye with 15:47 to go. Carter hit a 3 that jumpstarted the Bulldogs on a 13-2 spurt capped by a jumper by Robert Woodard II with 11:50 left.

Mississippi State: The Bulldogs came in having knocked down 10 or more 3s in four straight games, but they showed they could win despite struggling beyond the arc. They hit just 5 of 19 for the game. They won with defense, outscoring Vandy 18-2 off 14 turnovers. They also didn't allow Vandy a single offensive rebound in the second half. The Bulldogs have won all six games this season and 15 straight since February 2017 when holding an opponent to 60 points or fewer.

Vanderbilt: This was just the start of a brutal four-game stretch for the Commodores with the first of four straight ranked opponents. No. 3 Tennessee visits Wednesday night, followed by a trip to No. 20 Oklahoma and finally a visit from No. 12 Kentucky.