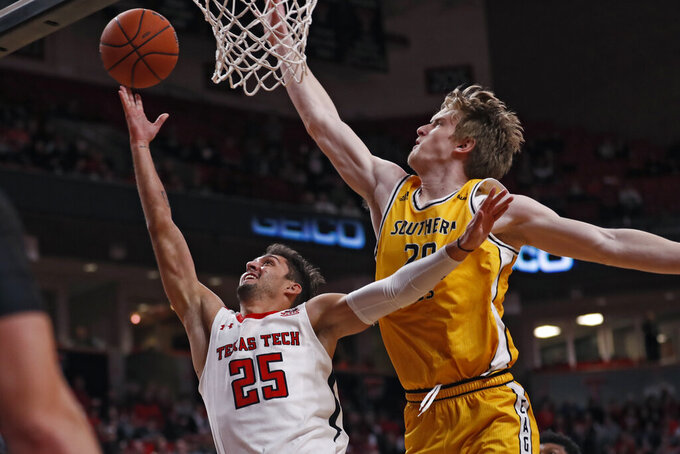 Texas Tech's Davide Moretti (25) shoots the ball as he is fouled by Southern Mississippi's Hunter Dean (20) during the first half of an NCAA college basketball game Monday, Dec. 16, 2019, in Lubbock, Texas. (Brad Tollefson/Lubbock Avalanche-Journal via AP)

LUBBOCK, Texas (AP) — Texas Tech is back in the AP Top 25 after the school's first-ever win over a No. 1 team.

The 24th-ranked Red Raiders did just enough to stay there against a team that had already been blown out twice by ranked opponents this season.

Terrence Shannon Jr. scored 18 points and Texas Tech rallied in the second half for a 71-65 victory over Southern Miss on Monday night.

“I think a lot of times when we sit around and feel sorry for ourselves. We’re disrespecting the opponent,” coach Chris Beard said. “They played harder than us in a lot of stretches of the game and we don’t really say that about our team as much but that’s exactly what happened.”

Texas Tech, which lost to Virginia in overtime in the national championship game last season, had dropped from 12th all the way out of the Top 25 with two straight losses, then lost again at DePaul.

The Red Raiders returned to the poll following a two-week absence with a 70-57 victory over then-No. 1 Louisville at Madison Square Garden in New York last Tuesday.

But the Golden Eagles (3-9) led well into the second half and were within two points in the final three minutes despite playing without leading scorer Boban Jacdonmi and two other players who have started this season.

“We’re a team in transition,” coach Jay Ladner said. “I thought it was good for our young players. I am in no way happy that we lost and not taking any type of solace, any type of moral victory and our players aren’t either."

Texas Tech was also short-handed in its fourth straight game without freshman Jahmi’us Ramsey. The team's leading scorer has been sidelined by a hamstring injury.

LaDavius Draine scored 21 points and Gabe Watson added 20 in Southern Miss' eighth consecutive loss to a ranked team going back to January 2011. Three of the defeats have come this season, including 25-point losses to Gonzaga, which was seventh and is up to No. 2, and Seton Hall, unranked now but 13th at the time.

Graduate transfer Chris Clarke had his second double-double for Texas Tech with 14 points and 11 rebounds and led the Red Raiders with six assists.

Texas Tech went ahead for good at 52-51 on a layup by Kyler Edwards with 8:54 remaining.

Moretti, the only returning starter for Texas Tech, was 1 of 12 from the field while missing all seven 3-point attempts in the first half.

The junior guard hit one from long range to get the Red Raiders going early in the second half, then another for the biggest Texas Tech lead to that point at 67-60 with 55 seconds to go. He finished 4 of 17 from the field.

“I know how much time I spend in the gym," Moretti said. “When I’m not shooting well I just repeat to myself, ‘I work too hard to not do good, to not shoot well.’ I pay the price every day so it's just like a mental thing.”

Southern Miss: While the losing streak against ranked teams continued, it was the first time in five such games that the Golden Eagles lost by less than 25 points.

Texas Tech: The Red Raiders made up for another bad shooting night by going 24 of 27 on free throws. With Moretti going 3 of 11 from long range, Texas Tech was 5 of 22 for 23% beyond the arc. They haven't been above 33% from long range in the past five games.

Now that they're back on a winning streak, the Red Raiders are in position to enter Big 12 play ranked. If they stay there, the next ranked opponent is likely to be Baylor, currently No. 10, in the second conference game.

Clarke, who transferred from Virginia Tech, has reached double figures in rebounds in four of the past five games and is starting to show some triple-double potential. His season high in assists is nine, reached twice. “He's a complete player,” said Edwards, who scored nine points along with TJ Holyfield.