No. 3 Dayton buries GW in season finale, looks to postseason 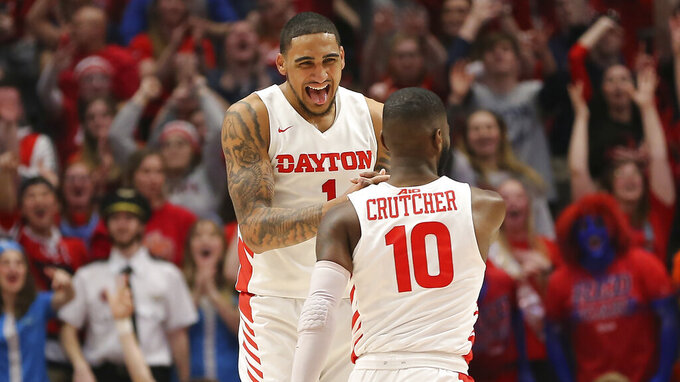 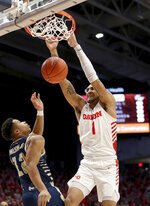 DAYTON, Ohio (AP) — Dayton put the lid on a historic regular season by cutting down the nets as runaway Atlantic 10 Conference champions.

The No. 3 Flyers now look to the postseason to add another chapter to what has been one of college basketball's best stories.

Obi Toppin had 27 points -- including seven dunks -- to lead Dayton's 76-51 rout of George Washington on Saturday, its school-record 29th win. The Flyers (29-2) won their 20th straight, including all 18 A-10 games, ending the season undefeated at home and in true road conteast. Their only two losses were at neutral sites.

Jalen Crutcher added 21 points on 5-for-8 shooting from 3-point range for Dayton, which will begin play as the likely No. 1 in the A-10 tournament that starts Wednesday in Brooklyn, New York. Landers had 10 rebounds.

The Colonials were in the game at halftime, thanks mostly to 6-of-16 3-point shooting. Despite missing its last seven shots of the half, Dayton led 26-25 at the break.

Dayton wore the Colonials down in the second half with a 23-4 run.

A 3-pointer and layup from Crutcher put Dayton up 46-37 with 10:38 remaining, and George Washington couldn’t shoot well enough late to overcome it. After a missed 3 by the Colonials' Maceo Jack, Crutcher hit another 3 while a pair of Toppin dunks pushed the Flyers’ lead to 53-37 with 8:39 left. They cruised from there.

“That's really been the beauty of this team all year,” Dayton coach Anthony Grant said. “They've been able to handle adversity in different ways that have come at them and find a way to persevere. And they did it in a big-time fashion today. It was unbelievable."

George Washington: A disappointing season ends at the hands of one of the country's hottest teams. Like most A-10 teams, the Colonials couldn't stay with Dayton as the second half wore on.

“Obviously, they've earned their ranking in the nation for as good a team as they are," George Washington coach Jamion Christian said. "We respected that, and they showed that today.”

Dayton: The Flyers dispatched every conference opponent, though not always with ease. They must work to avoid a letdown in the conference tournament. The Flyers seek to be rewarded for their fine season with a high seed in the NCAA Tournament.

Toppin has been dunking the ball with a flourish this season. A between-the-legs slam in the Flyers' second-half explosion was one of his best yet.

Grant said he thinks his players will come out strong in the conference tournament instead of looking ahead to the NCAA Tournament, which might be easy to do.

“These guys, they enjoy playing, they enjoy winning," he said. “So I think the thing we have to do is understand we're guaranteed one game in Brooklyn. That's it. There's nothing left after that. We have to go earn everything else we get. So our focus is going to be, make sure we're prepared as we can be for that one game that we get in Brooklyn so we can play a second game."

Dayton honored seniors Landers and Ryan Mikesell before and after the game. Landers played four seasons and Mikesell five, including a medical redshirt in 2017-18 after double hip surgery. Landers averaged 10.8 points per game and Mikesell 8.6. Both got to lift the A-10 trophy and cut the nets.

“It's just fun that you can enjoy that moment with your fan base,” Grant said. “You don't get a chance to do that all the time.”