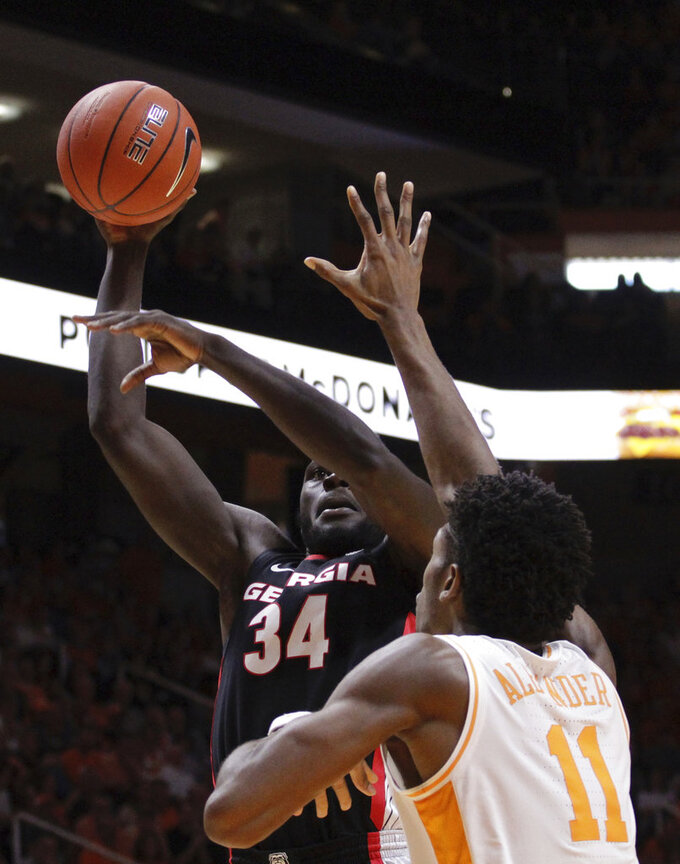 KNOXVILLE, Tenn. (AP) — Tennessee is creating quite a home-court advantage at an arena it had trouble filling in the past.

Jordan Bowden scored 20 points off the bench as the third-ranked Volunteers opened Southeastern Conference competition by trouncing Georgia 96-50 on Saturday for their eighth consecutive overall and 17th straight home win.

"You can't take it for granted," Tennessee coach Rick Barnes said. "You just can't think because you play at home, you can walk out and it's going to happen. The fact is, these guys have worked hard and they've just grown as a team. Winning at home has been a byproduct of that, obviously."

Tennessee recorded the most lopsided triumph in this series' 156-game history, surpassing a 105-69 Volunteers victory from Feb. 1, 1975.

The Vols were one point away from matching their most decisive win over any SEC opponent. Tennessee beat Mississippi 102-55 on Jan. 8, 1966.

"I'm more disappointed in our competitive level, and the fact I'm not really sure what we made them earn today," Georgia coach Tom Crean said. "They made a lot of shots. They made a lot of plays. I'm not sure how much we contested those things. We've got a long way to go in a short time."

Tennessee's blowout delighted a sellout crowd of 21,678 at Thompson-Boling Arena - the first of five announced home sellouts for the 2018-19 season at college basketball's fifth-largest home arena. Tennessee athletic department spokesman Tom Satkowiak says it's believed this is the first time the Vols have sold out as many as five home games since Thompson-Boling Arena opened in 1987.

The Vols gave those fans plenty to cheer. Tennessee never trailed all day and led by as many as 49 points.

"It's a dream come true for me," said Bowden, a Knoxville resident. "When I was younger, coming to all the games, seeing the atmosphere and (now) being a part of it, it's really big."

Derek Ogbeide scored 17 points for Georgia (8-5, 0-1), which had a three-game winning streak snapped.

Nicolas Claxton, who had been averaging a double-double for Georgia, committed four fouls in the first half and finished with six points and five rebounds. Crean said he tried removing Claxton after the third foul but couldn't make a substitution before a fourth foul was called as well.

"You get into a game like this and you're down like that, you've got to play through things, but we certainly wanted to get him out," Crean said. "The whistle didn't stop (play) until unfortunately he got his fourth foul."

Georgia: The Bulldogs couldn't do much of anything against Tennessee's defense. The Bulldogs shot a season-low 32.1 percent (17 of 53) and were 1 of 20 from 3-point range.

Tennessee: The Vols are off to their best start since winning 16 of their first 17 games in 2007-08. That team went on to earn a No. 1 ranking later that year before finishing 31-5 with an NCAA regional semifinal appearance.

Turner averaged 10.9 points and was named the SEC's co-sixth man of the year last season.

"We've been pretty good, but we can't get to our full potential without him," Barnes said.

Williams needed just five field-goal attempts to score his 18 points. He made his only 3-point attempt, went 3 of 4 from inside the arc and was 9 of 11 on free throws. Williams also had eight rebounds and five assists.

"We ran like we were wearing 50-pound weights on our shoulders," Crean said.