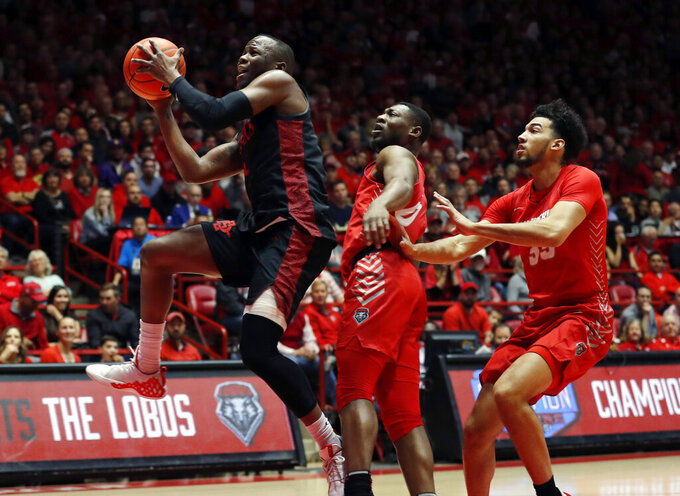 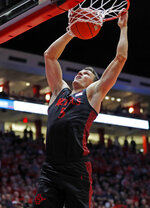 KJ Feagin scored 18 points and the No. 4 Aztecs scored the first 17 points of the game to rout undermanned New Mexico 85-57 on Wednesday night.

San Diego State (22-0, 11-0 Mountain West) made seven of its first nine shots, including three 3-pointers, to blow the game open early. The Lobos missed their first seven shots and also turned it over twice in that span. The lead never dropped below 12 points thereafter and the Aztecs continued their perfect season.

Malachi Flynn added 12 points with six assists and was the key to the game.

“We played the right way and we were rewarded for it,” Aztecs coach Brian Dutcher said. “Malachi was a perfect example of it. He could have run out here and scored 20 or 30 points but he didn’t care. He just moved the ball. He played effortless basketball. He set the tone.”

“I thought that opening three minutes by San Diego State was the most impressive three minutes I’ve ever gone up against another team in my four years as a head coach,” Lobos coach Paul Weir said. “They came out laser focused, not missing.”

New Mexico, which lost at home for the first time this season, was missing four starters from the beginning of the season – two to suspensions, one because he was dismissed and another for an injury.

The latest was leading scorer JaQuan Lyle, who already had just missed two games because of an injury. He was suspended Wednesday for two games after he was host to a party Saturday in which two people were shot, suffering non-life-threatening wounds.

Playing so shorthanded meant everything had to go right for New Mexico.

“We were going to need some shots to go down and we were going to need for them to miss some and quite frankly, they didn’t,” Weir said. “By them hitting them and us missing them the margin just kind of grew and grew. I think you just have to tip your hat to how great a team San Diego State was.”

San Diego State: With the easy win, the Aztecs retained their large conference lead as every other team has at least three losses. It is the team’s longest undefeated streak to start a season

New Mexico: The loss drops the Lobos out of a four-way deadlock for fourth place in the Mountain West.

It was San Diego State’s 11th road/neutral-court win of the season.

“This was just another road win for a very good basketball team I’ve got this year,” Dutcher said. “And to sit at undefeated going into February, I think no one would have imagined that in their wildest dreams.”

San Diego State went 10 of 20 behind the arc in the first half and finished with 15 3-pointers.

“We found ourselves with a lot of open 3s that we took advantage of,” Dutcher said. “I think we made 10 in the first half. When you go 10 for 20 in the first half from 3, you’d expect to have a lead. We shot the ball extremely well and we moved it quick.”

San Diego State: The Aztecs are home Feb. 1 to play Utah State, which is coming off a 68-45 win over Wyoming on Tuesday.

New Mexico: The Lobos are at Fresno State on Feb. 1 after the Bulldogs beat Air Force 79-68 on Tuesday.