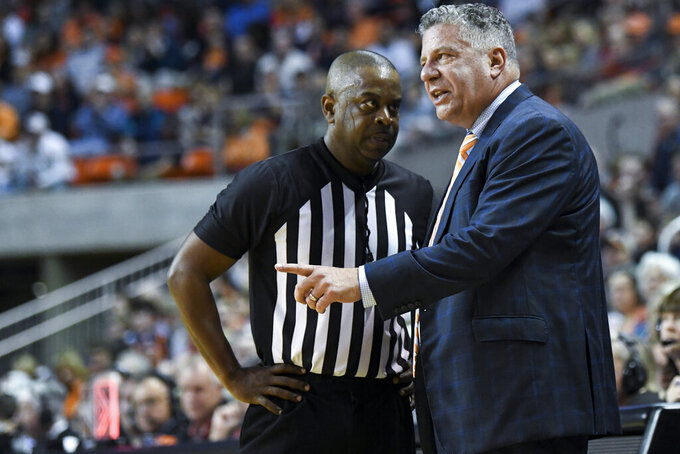 Auburn head coach Bruce Pearl talks to an official during the first half of an NCAA college basketball game against Georgia, Saturday, Jan. 11 2020, in Auburn, Ala. (AP Photo/Julie Bennett) 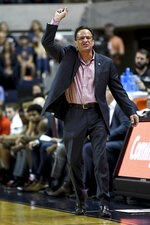 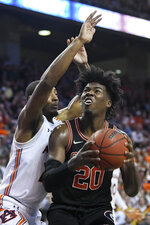 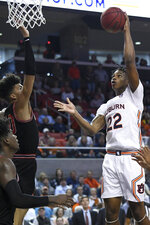 AUBURN, Ala. (AP) — The bench helped trigger No. 5 Auburn's emphatic reboot from a slow start.

Anfernee McLemore started the resurgence with a dunk and fellow backups Allen Flanigan and Jamal Johnson kept it going with 3-pointers Saturday in the Tigers' 82-60 win over Georgia to keep that perfect start going.

Samir Doughty had 17 points and Auburn (15-0, 3-0 Southeastern Conference) surged with a 40-13 run after falling behind early to the Bulldogs (10-5, 0-2), a dominant stretch that extended into the second half.

The backups did their part.

“It was a big spark for the team," McLemore said. “We didn't start off as well as we wanted to, so me and Allen being able to come off the bench was big for our team."

Auburn got hot and the Bulldogs, who shot 38 percent, cooled down.

McLemore and the freshman Flanigan both scored 12 points for the Tigers. It was a career high for Flanigan, who also helped defend Georgia star freshman Anthony Edwards. Doughty added six rebounds and four assists.

Rayshaun Hammonds added 12 points for the Bulldogs, who were coming off a 78-69 loss to No. 14 Kentucky in a tough stretch. The Tigers didn't let this one stay that close.

“They are one of the deepest, toughest, incredibly well coached groups in the country," Georgia coach Tom Crean said. “And they’re also one of the oldest and they know how to play and they don’t panic.

“They don’t seem to let misses and things like that affect them on the other end, and it really stood out even more today with our youth.”

Crean said Georgia, which started three freshmen, didn't respond as well to shooting struggles and let it affect the defense and rebounding “big-time."

Edwards struggled much of the game but still finished with 18 points, nearly his season average. He was 6-of-15 shooting and made just 4 of 11 from the free throw line.

“He showed it a little bit in his emotions," Flanigan said. “He dropped his head a couple of times, so it gave me more confidence to keep pressuring him."

The Bulldogs had an early eight-point lead swallowed up by Auburn runs of 12-2 and 17-1. The Tigers held Georgia without a field goal for the final 6:31 during the second surge, building a 35-24 halftime lead.

Christian Brown scored the final four points on free throws to cut Georgia's deficit a bit. The Bulldogs couldn't come closer after that.

Auburn coach Bruce Pearl said it was “probably the best the bench has played."

“Anfernee and Allen and Jamal were terrific and when that bench starts playing like that, we’ve got a chance to be a very good ball club," Pearl said.

Georgia: The Bulldogs played their third straight ranked opponent, having beaten No. 21 Memphis and lost to the Wildcats. They shot 32 percent (8 of 25) in the first half and finished making just 17 of 33 free throws (51.5 percent).

“That's an anomaly," Crean said of missing the foul shots.

Flanigan, son of former Auburn point guard and current assistant Wes Flanigan, helped spark the Tigers in the first half when he topped his previous season high of eight points. He also had six rebounds and two steals.

“(Pearl) told me to be a lot more aggressive," Flanigan said. “He told me to get all the 50-50 balls and make sure I box out and get every rebound."

RESCHEDULED On Friday, the game was moved up six hours in an attempt to beat storms coming into the area. The game was completed under a tornado watch.