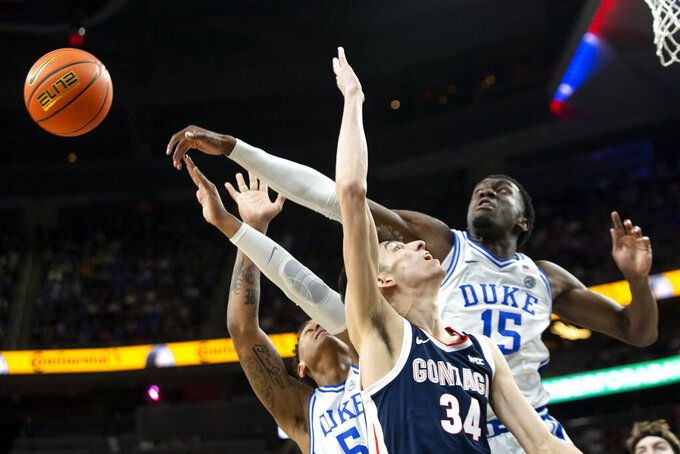 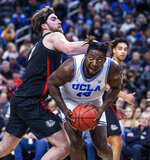 LAS VEGAS (AP) — In a town known for major championship fights, it seemed only fitting a long-anticipated 40-minute heavyweight bout between No. 1 Gonzaga and No. 5 Duke take place in Las Vegas.

Paolo Banchero scored 21 points to help Duke hold off a turnover-prone Gonzaga team 84-81 on Friday night in front of an announced 20,389 fans — the largest basketball crowd ever in Nevada.

“It’s just a really big-time game, what a great crowd,” said Duke coach Mike Krzyzewski, who is in his final year at the helm of the Duke Blue Devils (7-0). “We thought it might be a showcase game and it was. But having this type of crowd was amazing. Obviously, we feel great about the win, and we think we beat an outstanding basketball team.”

“We’ve always asked over the years before we’ve had to make decisions on anything -- how we travel, how we operate, how we schedule, facility-wise -- the first question always is, ‘What’s Duke doing?'" Few said. “I don’t think I can pay any higher respect than that."

Gonzaga (6-1) battled back from a nine-point deficit thanks to Julian Strawther’s offensive prowess early in the second half. He scored eight of the Bulldogs’ first 14 points to help them get within two. But Gonzaga suffered through a 0-for-5 span down the stretch and turned the ball over three times to allow Duke to close the game on a 13-9 run.

“We felt like if we played our best and did what we do best, we were going to have a real shot for the win,” Banchero said.

Strawther led Gonzaga with a career-high 20 points and 10 rebounds, including shooting 57.1% from the floor in the second half. Drew Timme added 17 points, Chet Holmgren had 16 points and Rasir Bolton chipped in 15 for the Bulldogs.

“The beautiful thing is we all believe in each other,” said Strawther, who registered his second career double-double. “Even if I miss a couple of shots, they’re going to keep looking for me. That’s what really keeps me going. They showed a lot of belief in me after I missed a few.”

Gonzaga, however, had 17 total turnovers for the game.

The Bulldogs did claw their way back to a 53-52 lead, and the game quickly became a battle of Duke’s relentless defensive pressure and Gonzaga’s precise passing through lanes the Bulldogs created on the fly.

“It felt like a Final Four-type game,” Timme said. “The atmosphere was great and it was two Goliaths going at it.”

After Gonzaga took an early 4-0 lead, Duke quickly established dominance with a 17-6 run, with Banchero and Williams putting on a show for the heavily favored Duke crowd.

The Bulldogs closed the gap to three, 19-16, but Banchero scored 13 of Duke’s next 21 points. Holmgren, who had to sit midway in the first half due to foul trouble, returned with 1:27 left in the half and drained a soft one-handed jumper followed by a 3-pointer by Strawther.

Duke: The Blue Devils faithful proved it travels well, with the majority of the crowd inside T-Mobile Arena draped in Duke blue.

Gonzaga: Before Friday night, the Bulldogs trailed for a total of 3:18 in four games — against Texas, Alcorn State, Bellarmine, and UCLA. Gonzaga trailed for more than 20 minutes against Duke until retaking the lead on a pair of Timme free throws at the 17-minute mark of the second half.