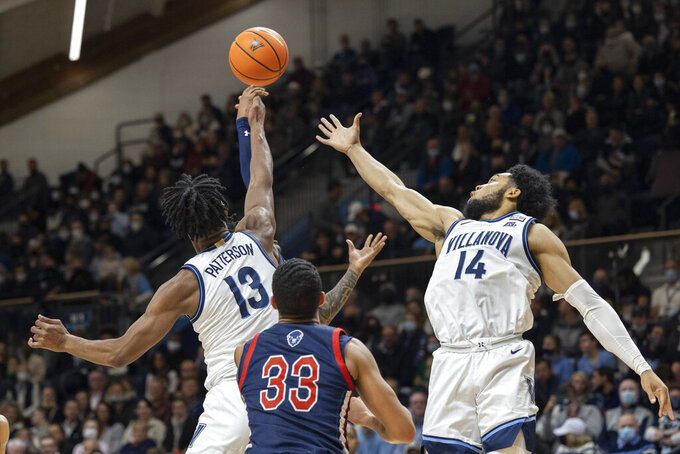 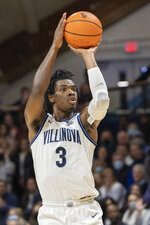 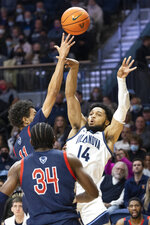 VILLANOVA, Pa. (AP) — Jay Wright lowered his head and speed-walked to the locker room at halftime to try and figure out what he just saw. Howard, a small program trying to make a big statement, hit about every shot in sight and had an upset on its mind.

Wright didn't win a pair of national championships at Villanova by losing his cool. And as confident as Howard played, the Wildcats also doesn't often lose at home to plucky teams like the Bison.

“I wasn't mad at them at halftime,” he said. “It looked to me like we were doing a decent job. Not great.”

Decent got it done.

The Wildcats (2-1) were coming off an 86-77 overtime loss Friday at Pauley Pavilion against No. 2 UCLA and were pushed for 30 minutes by a Bison team aiming for arguably the biggest win in school history.

The Bison, out of the Mid-Eastern Athletic Conference, came ready to knock off a program that went undefeated at the Pavilion the last two seasons and has lost at home only 64 times since the building opened in 1986.

With near-flawless 3-point accuracy, Howard (3-1) gave the Wildcats fits for most of the game until it faded down the stretch. The Wildcats quit playing around late and built a 20-point lead with a 13-0 run over a five-minute stretch late in the second half.

Jermaine Samuels hit a 3 and Gillespie hit two straight to break the game open and send the Wildcats on their way to the expected victory. The Wildcats made 14 3s and all 26 free throws.

The Bison shot with the type of accuracy that should have put them in better position to beat the Wildcats, who were unsurprisingly a heavy favorite according to FanDuel Sportsbook. Howard made 11 straight shots in the first half and still couldn’t take the lead. Tai Bibbs hit a 3 for the 11th straight make and that only brought the Bison within 39-35, yet echoed reminders for Villanova of a November 2018 home loss to Furman.

The Bison shot 45% from 3 over the first three games and went 8-for-12 in the first half and an impressive 17 of 23 in the half overall — that’s 74%. Foster hit four 3s and the chest-bumping, head-slapping Bison — picked to finish fifth in the MEAC — had the Wildcats on the ropes.

Villanova, though, came back swinging. The Wildcats’ first four baskets were 3-pointers for a 12-2 lead and they relied on the long ball to push back the Bison.

“I didn't think we were that bad defensively,” Wright said. “We were there on a lot of the 3s. They just stuck them. They hit some 2s.”

Philadelphia 76ers President Daryl Morey was at the game and wrote under a video clip on Instagram, “Howard shooting 80% and down 7. My analysis says this is not good for Howard.”

Morey tweeted about the game, and his first response from a fan to an analytical question he posed about Howard was, “Trade Ben (Simmons) man.”

So much for a night off.

Howard: This is the type of game that has to give Howard a major confidence boost in the rest of the nonconference schedule. Howard plays another Big East team in Georgetown next month.

Villanova: The Wildcats counted on Howard being the breather as part of a rugged nonconference schedule. The Wildcats play No. 17 Tennessee and then another game against a guaranteed ranked team this weekend in the Hall of Fame classic. Villanova plays No. 9 Baylor and Syracuse next month.

“We get an experience from every game,” Slater said. “Our next game is our biggest game.”

TOUGHER THAN THE REST

Howard coach Kenneth Blakeney enjoys a tough nonconference schedule that has two Big East teams and a return trip in December to Philadelphia to face Pennsylvania.

“I want to play as many great, high-level games as we can play,” Blakeney said. “That's the vision of our program, is to grow and develop to be one of those programs.”

Howard: At High Point on Saturday.