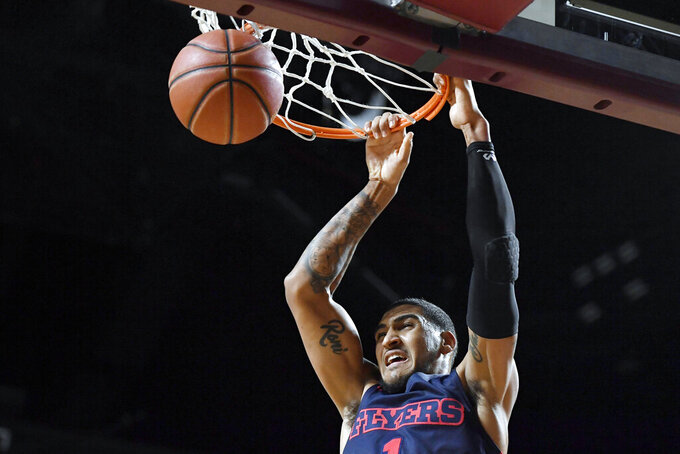 Dayton's Obi Toppin dunks the ball in the first half of an NCAA college basketball game against Massachusetts, Saturday, Feb. 15, 2020, in Amherst, Mass. (AP Photo/Jessica Hill)

AMHERST, Mass. (AP) — Jalen Crutcher gave Dayton the edge in the second half of a tight road game on Saturday.

Crutcher scored 11 straight points over a nearly two-minute span and got 15 of his 17 points in the final half as the sixth-ranked Flyers held off the Minutemen 71-63 for a 14th straight win.

“I knew my team needed it, so I just had to go out there, you know, try to do what was best for the team at the time,” Crutcher said.

The Flyers remain unbeaten in regulation this season after carrying the fifth-longest winning streak in Division I into the game.

Tre Mitchell had a game-high 26 points and 10 rebounds and Samba Diallo added 10 points for the Minutemen.

“We were gonna hold the second-most offensive efficient team in the country to 60 points,” Minutemen coach Matt McCall said. “We were right there. Just that one stretch.”

Dibaji Walker’s layup with 11:23 remaining brought the Minutemen back within 46-41 after the Flyers led by five at halftime. Crutcher then hit back-to-back 3-pointers, a layup and another 3 with 7:03 remaining to push Dayton’s lead up to 14.

“When I hit my first shot, that’s when I was feeling it,” Crutcher said. “So it was on from there.”

After the Flyers led by as many as 16, UMass used a late 7-0 run to pull within single digits and trailed 67-61 after two Diallo free throws with 23 seconds to play.

Toppin missed two free throws and Carl Pierre made a quick layup to make it 67-63 with 14 seconds to go. Crutcher made two free throws to help seal it and Pierre missed a desperation 3 in the closing seconds.

Dayton led 31-26 at the break behind an 11-point first half for Toppin.

Mitchell scored six of his team’s first 10 points as UMass led 10-4 five minutes in. A 3-pointer by Mitchell made it 15-10 before Dayton rallied with a 15-0 run while holding the Minutemen scoreless over a nine-minute span.

“For me, I didn’t have anything to lose (today). I didn’t,” Mitchell said. “I think a lot of people are gonna take notice of today’s performance. It was just another opportunity for me.”

Dayton: The Flyers will play three of their final six games at home as they aim to keep building momentum ahead of a first NCAA Tournament appearance since the 2016-17 season. The Flyers are already two clear of last year’s win total and would match the 2016-17 team with a victory next game.

UMass: Three wins in five games had the Minutemen feeling good before this setback against Dayton. There was added buzz as they faced their highest-ranked home opponent since a game against No. 2 Saint Joseph on Feb. 25, 2004. UMass’ last NCAA Tournament berth in 2014 came in the same season as its last AP Top 25 win, a 81-65 victory over then-No. 19 New Mexico on Nov. 22, 2013.

The Flyers swept the two-game season series with the Minutemen. Dayton earned a 88-60 home win over UMass in their first meeting on Jan. 11 behind Toppin’s game-high 16 points and five steals.

The Minutemen fell 58-46 against then-No. 7 Virginia on Nov. 23, a loss that snapped a five-game winning streak to open the season. UMass has struggled since with 15 losses in 20 games.

Coming into the game, Dayton boasted the best field goal percentage (52.3 percent) in Division I and ranked second nationally in assists per game (18.3). The Flyers shot 52.9 percent (27 of 51) and had 18 assists against the Minutemen.

“Today, we’re happy to get the win. I think all of those guys in the locker room would tell you that we need to be better,” Dayton coach Anthony Grant said.