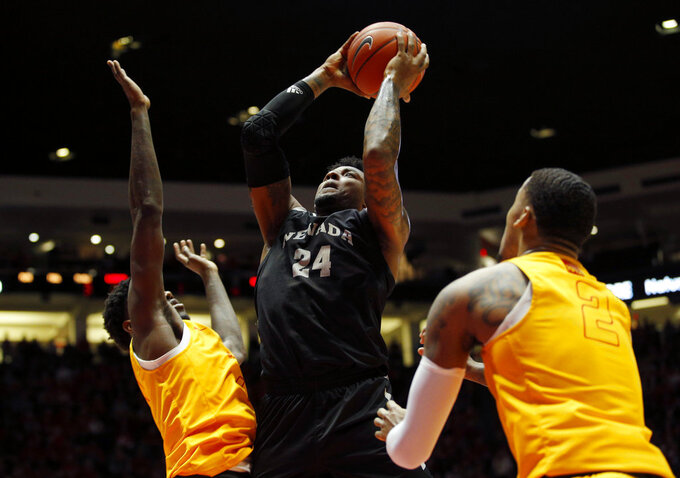 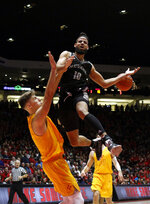 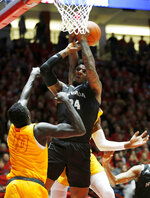 ALBUQUERQUE, N.M. (AP) — New Mexico coach Paul Weir did his best to get the Lobos to focus on playing their game against undefeated and sixth-ranked Nevada.

"I actually gave them a quote (Friday) and a quote (Saturday) in the locker room from Gregg Popovich after the Spurs beat the Raptors," Weir said of the San Antonio head coach. "It's not about who we're playing. It's not about anything, it's just about us executing and competing. And that's all we talked about for two days."

The message sunk as the Lobos shut down Nevada on Saturday, getting 27 points from Anthony Mathis and handing the Wolf Pack their first loss of the season, 85-58.

"We had so many people rebound the ball. And play unselfish," Mathis said. "A team that plays unselfish is so hard to beat, as you see. We played super unselfish and we got a big win."

Vance Jackson came off the bench for a double-double, with 18 points and 10 rebounds, and added seven assists and three steals for the Lobos. Makuach Maluach had 14 points.

Jordan Caroline scored 17 for Nevada, which looked out of sorts throughout. Brothers Caleb and Cody Martin combined for 4-for-21 shooting from the field and 17 points.

New Mexico took control early in the first half with a 20-6 run for a 22-9 lead. The spurt featured 3-pointers by Jackson and Dane Kuiper, as well as a resounding windmill dunk by Carlton Bragg that energized the crowd and the team.

"It just got us going," Mathis said. "You see your opponent dunking on people like that, it just gets you going. You just want a piece of it. You want to get in there. You want to contribute. You want to do your thing and that's what we did."

New Mexico maintained a double-figure lead despite the Wolf Pack scoring three straight points off of technical foul shots. The lead grew to 22 points at 67-45 after 3-pointers by Maluach and Mathis with seven minutes left.

"The one thing we've prided ourselves on was really competing until the end," Nevada coach Eric Musselman said. "We didn't play hard tonight. We splintered and we came apart. We have to regroup and try to play better next game.

Nevada's 14-0 start equaled the best in school history, matching the 1951-52 squad. The Wolf Pack came into the game as one of four undefeated teams in the country. Nevada had been dismantling most opponents, with 10 of its victories by double figures. But this loss will likely drop the Wolf Pack several spots in the rankings, behind two-loss teams Gonzaga and Michigan State.

Coming into the game, New Mexico had lost three of four at home, but had beaten the Wolf Pack three out of four meetings in the Pit. Nevada, however, had won the previous four in the series, one in Albuquerque and two in Reno and once in the conference tournament.

The last time Nevada played in the Pit in 2017, it turned into a legendary Wolf Pack performance as they came back from a 25-point deficit with 11 minutes left, and down by 14 with 1:10 left. Nevada's last six buckets in regulation were 3s and Caroline had a career day with 45 points and 13 rebounds in the Wolf Pack's 105-104 double-overtime victory.

But Mathis, who was one of the few players who played in that game, said he tried not to think about it.

New Mexico is home on Tuesday against UNLV.