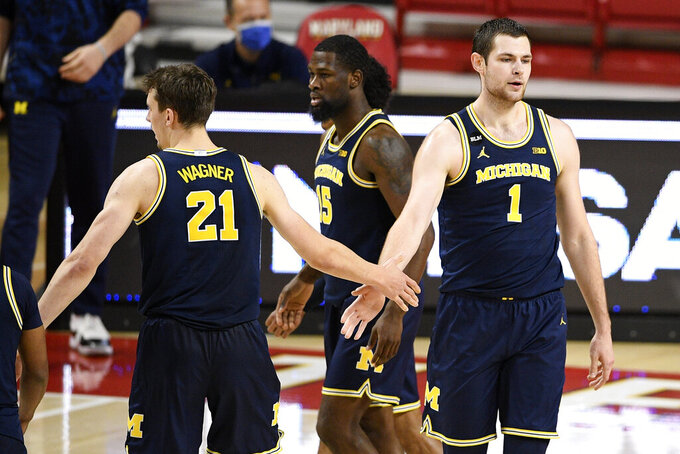 Michigan has rolled through the first part of its schedule, beating two ranked opponents while opening the season with 10 straight wins.

The Wolverines face a stiff challenge this week in an always-tough Big Ten if they're going to keep it going.

One of six unbeaten teams left in Division I, No. 7 Michigan faces No. 9 Wisconsin and No. 23 Minnesota in a span of four days.

“We embrace the competition and we know that this league is for competitors only,” Michigan coach Juwan Howard said. “And so we embrace that as well, but we’re going to continue to keep finding ways on how we can get better.”

The Wolverines (10-0) have been pretty good so far, ranking seventh in KenPom.com's college basketball ratings and sixth in adjusted offensive efficiency. Michigan has won four of its five conference games by at least nine points and Hunter Dickinson has been superb in his freshman season, leading Michigan with 18 points and 8.1 rebounds per game.

The Wolverines certainly will be tested by Wisconsin on Tuesday.

The veteran Badgers (10-2) bounced back from a loss to Maryland with wins over No. 23 Minnesota and Indiana to give themselves a shot at tying for the Big Ten lead with a win over Michigan. Wisconsin is fifth in the KenPom ratings and is holding teams to 61.5 points per game, 23rd nationally.

Senior guard D'Mitrik Trice has been a handful for opposing teams, averaging 14.8 points, 3.6 assists and 3.3 rebounds.

Get through Wisconsin, Michigan will have to regroup to face Minnesota (10-4), which will be motivated after losing its past two games. The Gophers also will be well rested with five days to prepare for Saturday's game.

The Big Ten, which has six teams in the AP Top 25, has another game between ranked teams on Saturday, when No. 21 Ohio State plays at No. 11 Illinois.

BIG 12 BATTLES: No. 2 Baylor had its game against No. 13 West Virginia on Tuesday postponed due to COVID-19 issues, but will still face a difficult test on Saturday against No. 15 Texas Tech.

The Bears (11-0) have blown through their schedule so far, winning by an average of nearly 26 points per game.

The Red Raiders (10-3) have arguably the most difficult week in the nation, having to face Baylor three days after playing No. 4 Texas on Wednesday. Texas Tech beat Kansas State and Iowa State last week.

WEST COAST RIVALRY: Top-ranked Gonzaga faces one of its toughest remaining hurdles in its bid for an undefeated season on Saturday, when the Zags host Saint Mary's.

Gonzaga has played one of the nation's most difficult schedules and has yet to lose, reeling off wins against ranked opponents Kansas, West Virginia, Iowa and Virginia.

The Zags (12-0) beat BYU by 17 and Portland by 28 last week. Joel Ayayi had the school's first triple double in the win over Portland.

The Gaels have lost twice and had two other games postponed in the last two weeks, but are always motivated when they face Gonzaga.

ACC SHOWDOWNS: The ACC has a pair of marquee games this week.

No. 19 Duke (5-2), which is playing well after a shaky stretch and COVID-19 issues, plays at No. 20 Virginia Tech on Tuesday. The Hokies (9-2) split their two games last week, bouncing back from a loss to No. 16 Louisville with a 14-point win over Notre Dame.

On Saturday, No. 12 Clemson takes a four-game winning streak into its home game against No. 18 Virginia. The Tigers had to postpone games against North Carolina and Syracuse after a positive COVID-19 test.

The Cavaliers are tied with Louisville and Duke atop the ACC at 3-0 after wins over Wake Forest and Boston College last week.

Clemson is sixth nationally in scoring defense, allowing 57.6 points per game, and Virginia is 10th (59.4), so don't expect a lot of scoring in Littlejohn Coliseum.