No. 8 Gonzaga must replace 4 starters from Elite Eight team 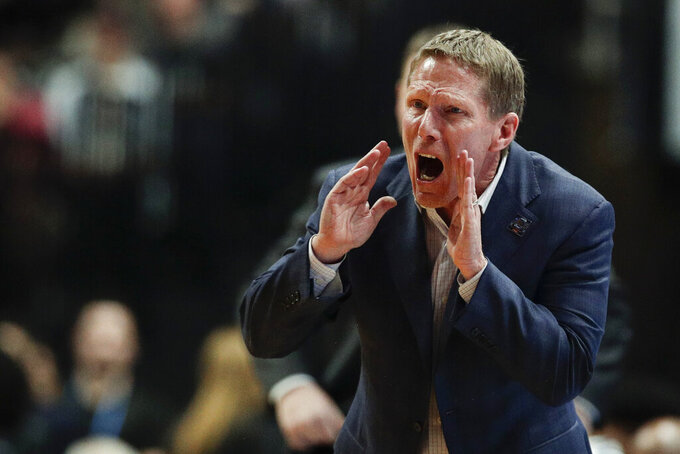 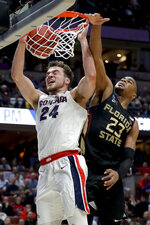 SPOKANE, Wash. (AP) — Mark Few has become accustomed to developing players at Gonzaga only to lose them to the NBA.

Maybe not as many as this time around.

The Bulldogs saw four of their starters from last season land on NBA rosters, leaving Corey Kispert as the only returning starter. Still, there's a load of talent at Gonzaga and it's why the Bulldogs were picked to win an eighth consecutive West Coast Conference title and are ranked No. 8 in the preseason AP Top 25.

"I don't know if we've been in this situation before," Few said. "Usually we have a slight majority of experienced guys over newcomers."

But all the success came with a cost.

Rui Hachimura and Brandon Clarke were picked in the first round of the NBA draft, and Zach Norvell Jr. and Josh Perkins signed free agent contracts.

Those departures left Kispert and a whole lot of new faces. Kispert said he is ready to take on a bigger role.

"This year's my year to take charge and step up and be a more reliable piece of the team," Kispert said. "I feel really old."

The Zags could get a major boost from the return of Killian Tillie, if he can stay healthy.

Two years ago, Tillie was a burgeoning star when he averaged 12.9 points, shot 58% from the field and nearly 48% on 3s. He could be a star again.

"I'm hoping he can stay healthy all year," Few said. "Everything goes better when he's out there."

The Zags picked up some experience via the transfer market, where they have enjoyed success in recent years.

Ryan Woolridge from North Texas and Admon Gilder from Texas A&M are both graduate transfers. Both are guards, and both are coming off injuries that sidelined them last season.

"They have played a lot of college basketball," Few said. "They know how tough they have to play. But they are new to our system. They're learning on the fly."

The Zags are looking for a breakout year from 6-foot-11 forward Filip Petrusev, who came off the bench in 32 games last year and showed flashes.

A big question is replacing Perkins at point guard after four years where that wasn't an issue. Woolridge, Joel Ayayi and freshman Brock Ravet are all likely to play some point, Few said.

With so many newcomers, Few believes this will be a team that may have some bumpy moments early.

"This is a team that really is going to get better," Few said.

Few enters his 21st season as head coach with a winning percentage of .823 (568-122), tops among any active coach. The Zags have never won fewer than 20 games or missed the NCAA Tournament under Few. He is 32 wins shy of 600 for his career.

The Zags always play a brutal nonconference schedule to counter critics who point to their lightweight league opposition. This year they are at the Battle 4 Atlantis, where they face either No. 12 Seton Hall or No. 15 Oregon in the second round. They also play at Texas A&M, Washington and No. 21 Arizona. In a major coup, they lured No. 9 North Carolina to Spokane on Dec. 18. "We schedule to get ourselves in the NCAA Tournament," Few said. "In the last decade, we've scheduled to be an upper-level seed, hopefully a No. 1 seed." They open the season at home Nov. 5 against Alabama State.