No. 9 Maryland rides play of Jalen Smith to top of Big Ten 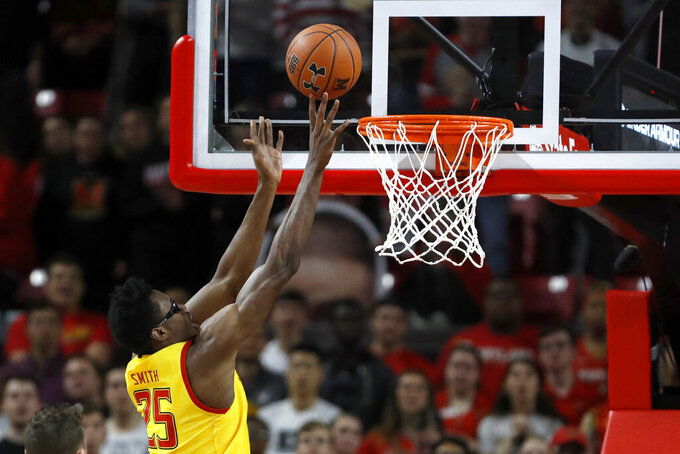 Maryland forward Jalen Smith goes up for a basket against Nebraska during the first half of an NCAA college basketball game, Tuesday, Feb. 11, 2020, in College Park, Md. (AP Photo/Julio Cortez)

COLLEGE PARK, Md. (AP) — Maryland's ascent to the top of the Big Ten standings coincides with the heightened effectiveness of sophomore forward Jalen Smith, who's notched seven straight double-doubles and become an intimidating shot-blocker for the resurgent Terrapins.

After losing two straight in mid-January, Maryland stood at 3-3 in the conference and was winless on the road. With Smith leading the way, the ninth-ranked Terps have since rattled off seven successive victories to gain sole possession of first place.

Nicknamed “Stix" in high school because of his wiry frame, the 6-foot-10 Smith hit the weight room after his freshman season. He tacked on 15 pounds to reach 225, and over the past three weeks has beefed up his stats in an effort to get Maryland deep into the NCAA Tournament.

Smith is averaging 18.7 points and 12 rebounds during Maryland's seven-game run. In addition, he swatted away six shots in a win over Rutgers last week and saved the Terrapins from a potential upset loss with a late block in Tuesday night's 72-70 escape against Nebraska.

“Stix has been terrific. I knew he was going to block that shot," a relieved Maryland coach Mark Turgeon said after the narrow victory.

Senior guard Anthony Cowan Jr. leads Maryland in scoring and assists but is quick to acknowledge that Smith's play has been a difference-maker for the Terps (20-4, 10-3).

“He's hoopin'. He knows what he's supposed to do — scoring, rebounds," Cowan said. “We need him to do that."

The word ‘hoopin" is not in the dictionary, but it adequately describes Smith's performance of late: A complete basketball player who is dominant on both ends of the court.

“It's just me being more assertive and making sure that I try to grab every rebound that comes off that rim," Smith said. “I know my offense is always going to come to me, so I'm not really worried about that. I just focus my emphasis on defense, and once I get my rebounds going and my defense going, offense just flows.”

Though Smith is imposing inside, he provides opposing defenses an additional challenge with his ability to pop a shot from beyond the arc. He's nailed 12 3-pointers over his past seven outings and is 21 for 45 in Big Ten games.

“What he's shooting in league play from the 3-point line is pretty incredible," Nebraska coach Fred Hoiberg marveled. “The kid is such a unique player because of his skill-set and his size. And that athleticism. Defense, what he did against Rutgers was incredible."

In addition to rejecting a half-dozen shots by the Scarlet Knights, Smith snagged 15 rebounds and hit a trio of 3-pointers. Smith has made 25 shots from beyond the arc compared to 19 all last year.

“He's a really good player to player to begin with, and you add that in and it gives a whole another dimension to their offense," Rutgers coach Steve Pikiell said.

Smith went 4 for 6 beyond the arc in a 77-76 win at Indiana and capped a 29-point effort with the game-winning shot. To celebrate, he taunted the crowd with such exuberance that Turgeon bolted across the floor and grabbed Smith's jersey while scolding him.

“I just lost my emotions. I couldn’t control them," Smith said.

“Very uncharacteristic of Jalen," Turgeon said. “If you knew him, he’s a great kid.”

Maryland has never won the Big Ten title since joining the league in 2014, and for that to happen the first time the Terrapins are going to have to stay hot over their final seven games, beginning Saturday at Michigan State. On the positive side, Maryland is riding a three-game road winning streak and has Smith on its side.

“He does what it takes to win," Turgeon said. “I'm happy for him. He's playing well."

By Dan Gelston 5 minutes ago
45 minutes ago
By Jacob Benge an hour ago
By Noah Trister 14 hrs ago
By Richard J. Marcus 15 hrs ago