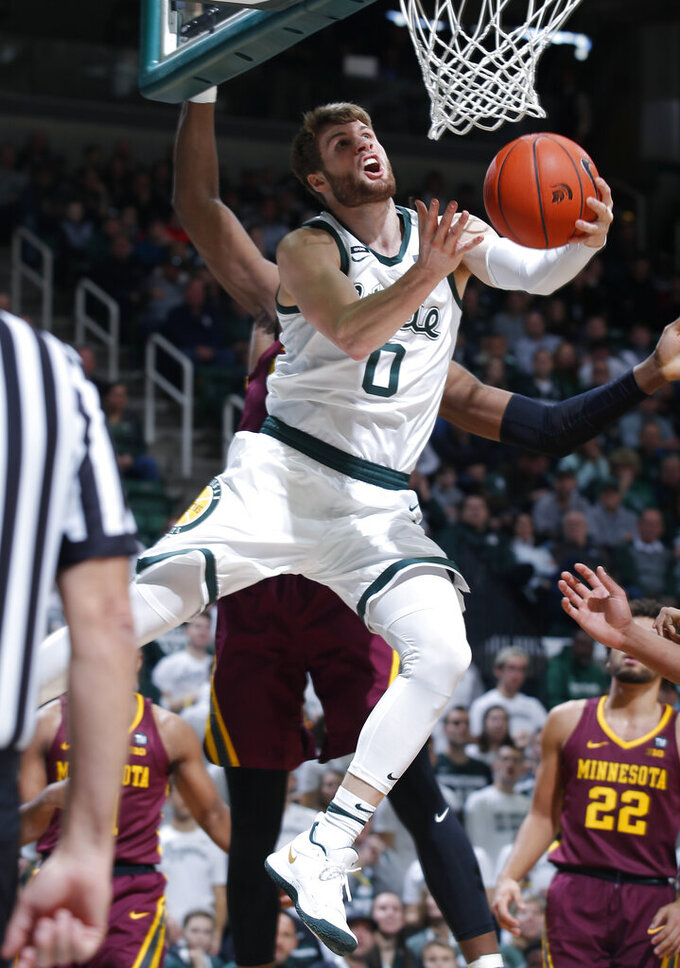 Michigan State's Kyle Ahrens (0) goes to the basket against Minnesota during the first half of an NCAA college basketball game, Saturday, Feb. 9, 2019, in East Lansing, Mich. (AP Photo/Al Goldis) 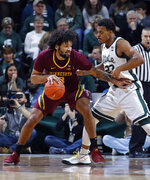 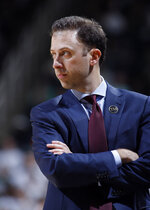 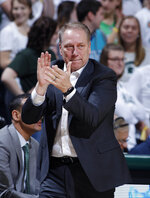 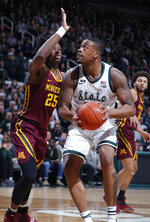 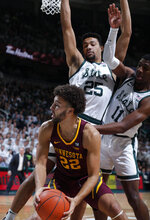 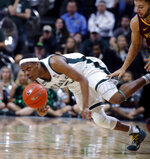 EAST LANSING, Mich. (AP) — Magic Johnson was back at Michigan State, joining his teammates to celebrate the 40-year anniversary of winning the national championship.

The Hall of Famer and Los Angeles Lakers president had plenty of opportunities to flash his familiar smile.

Nick Ward had 22 points and Matt McQuaid scored a season-high 18, leading the ninth-ranked Spartans to a 79-55 win over Minnesota on Saturday to keep the festivities positive.

"That's why you come to places like this," McQuaid said. "This place is special."

Ward, in particular, started the game inspired and appeared to stay motivated to bounce back from his previous home game. He was 1 of 9 at the free throw line, including a miss that would have put his team ahead late in regulation, and the Spartans were 8 of 22 as a team in a 79-75 overtime loss to Indiana last Sunday.

"We've got to leave those games in the past and move forward," Ward said. "I just came out determined to do everything I could to win this game."

Ward opened game with a basket, grabbed eight of his nine rebounds over the first 20 minutes, and closed the first half with a block to help Michigan State lead Minnesota 35-24. The junior forward made the first two shots after halftime and the Spartans went on to lead by 28 points midway through the second half.

"I'll give Nick Ward credit," coach Tom Izzo said. "We got to figure out how to keep that going."

Michigan State, which has struggled to stay healthy, may have another injury concern.

Senior forward Kenny Goins played just 7 minutes in the first half and didn't play after halftime because of a bruise on his left elbow. X-rays were negative, but Izzo doesn't know if or how long Goins will be out of the starting lineup.

"I won't know anything until (Sunday), but at least I know it's not broken," Izzo said.

Freshman Thomas Kithier took advantage of the opportunity to play in Goins' place, scoring a season-high eight points. Cassius Winston had 11 points and nine assists without a turnover for the Spartans.

The Golden Gophers (16-8, 6-7) have lost a season-high three games and the latest setback was a rout in part because their leading scorers, Amir Coffey and Jordan Murphy, combined to score just nine points after entering the game scoring more than 30 points per game.

Minnesota's Gabe Kalscheur scored 17 points and Daniel Oturu had 12 points, starting in place of forward Eric Curry, who was out with a calf injury.

"We need Eric back," Pitino said. "We're just a more complete team with him."

"We've got to get our confidence back," Gophers guard Dupree McBrayer said.

Michigan State: McQuaid did what the Spartans need him to do more often without shooting guard Joshua Langford, who recently had season-ending surgery on his left foot to officially take a 15-point scorer out of the lineup. McQuaid entered the game averaging 8.3 points and more than doubled that by making 6 of 9 shots, including 4 of 6 3-pointers.

"It made a big difference," Izzo said.

The Spartans will likely fall in the poll because they lost 79-74 at Illinois on Tuesday night.

Johnson and Greg Kelser, who also stared on Michigan State's first national championship team, both lamented the reunion didn't include the late Jud Heathcote , their coach who died in 2017.

"It's bittersweet without Jud," Kelser said. "We'll have fun with this, but it will be with a heavy heart."

Michigan State: Plays at No. 19 Wisconsin on Tuesday night.