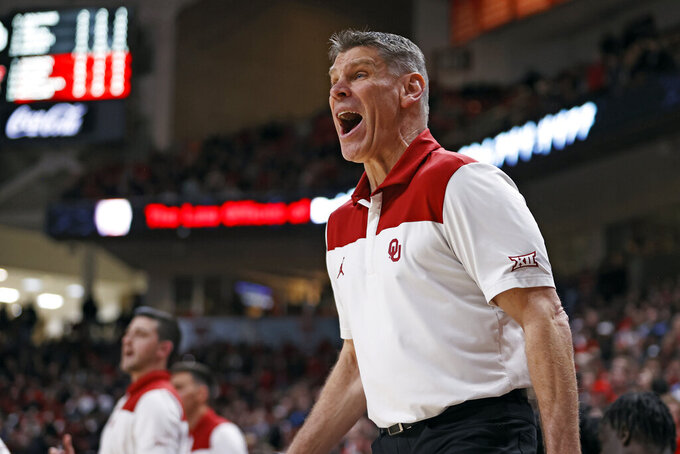 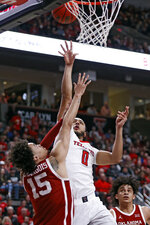 LUBBOCK, Texas (AP) — Ninth-ranked Texas Tech is already tough enough to beat on its home court. Things really got out of hand when Oklahoma kept turning over the ball.

“When you get easy baskets, you know, you're probably going to win a lot of games,” first-year Tech head coach Mark Adams said.

Davion Warren scored 16 points, Bryson Williams had 13 and the Red Raiders won their 20th consecutive home game, avenging their only loss this month with a 66-42 victory over Oklahoma on Tuesday night. Texas Tech had eight consecutive baskets in the second half off turnovers by the slumping Sooners.

Williams had the first two baskets of the second half when the Red Raiders (22-6, 11-4 Big 12) scored the first 10 points. That included converting an OU turnover into a back-door layup by Adonis Arms, who brought the ball up the court before making the first of five passes between four players — the last a bounce pass from Clarence Nadolny to Arms along the baseline.

Jalen Hill had a team-high eight points for the Sooners (14-14, 4-11), who have lost four straight since their 70-55 home win over Texas Tech two weeks ago. Oklahoma had 21 turnovers that led to 26 Tech points, including 13 turnovers in the second half that the Red Raiders converted into 23 points.

Marcus Santos-Silva and Arms both finished with nine points for the Red Raiders, who are 17-0 at home this season. Tech has won its last four games and seven of eight, with the lone loss in Norman.

Warren's 16 points were the most for the senior transfer since 19 in the second game of the season. He had a combined five points on 1-of-12 shooting the previous two games, but made 7 of 9 shots against Oklahoma.

“Just staying the course. The past couple of games I’ve been getting myself in trouble with foul trouble, so I kind of didn’t get in the rhythm of those games,” Warren said. “It’s really not about scoring, because I didn’t really come here to be the scorer. I did that in my previous years.”

The Red Raiders never trailed, going ahead to stay on a layup by Williams that broke a 7-7 tie only 4 1/2 minutes into the game.

Tech had a 19-0 run over nearly seven minutes midway through the second half that included three consecutive baskets by Santos-Silva. Nadolny had a pass to Santos-Silva streaking into the lane and without a dribble had an impressive slam with his left hand to make it 58-29.

“Whether you lose by that much, or this much, it’s a loss you got to put in the bank,” Moser said. “I'm upset at a lot of things, but on the other hand, we've got to move past this.”

Oklahoma: The Sooners, who opened the season 4-0, had their lowest-scoring game of the season and slipped to a .500 record for the first time. They have lost seven of eight. Their win over Texas Tech was their fourth over a top-15 team. ... Oklahoma had two-point losses to Kansas and Texas before a 75-54 loss at Iowa State and the setback against Tech. Both lopsided losses have come since a season-ending injury to senior guard Elijah Harkless.

Williams began his college career with two seasons at Fresno State and two at UTEP before transferring to Tech this season. He surpassed 2,000 career points, and now has 382 of his 2,009 career points for Tech.

“He’s one of the most dedicated guys that I’ve ever been around,” Adams said.

Going into the game, some projections had Oklahoma listed in the first four out of the NCAA Tournament field.

“Got a lot of ball left, don't count us out,” Moser said. “We've got opportunities. We've got great opponents."

Oklahoma: Home against in-state Big 12 rival Oklahoma State on Saturday. The Sooners lost the first matchup, 64-55, in Stillwater on Feb. 5.

Texas Tech: At TCU on Saturday, two weeks after beating the Horned Frogs 82-49 in Lubbock.