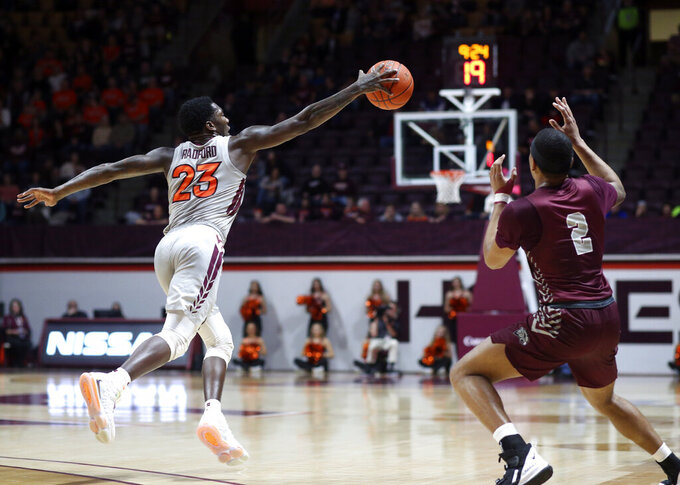 Virginia Tech's Tyrece Radford (23) intercepts a pass intended for Maryland-Eastern Shore's Ty Gibson (2) in the first half of an NCAA college basketball game in Blacksburg, Va., Sunday, Dec. 29 2019. Radford converted the steal for a basket on the play. (Matt Gentry/The Roanoke Times via AP)

Nolley finished with 18 points and a career-best 10 rebounds. John Ojiako added 15 points, Tyrece Radford scored 13 and Jalen Cone 11 for the Hokies (10-3). Virginia Teh also tied a school record with just two turovers, both coming after coach Mike Young emptied his bench in the closing minutes.

“This has not been murderer's row,” he said of the schedule to date. "We have played some good programs. ... For this team to get here, you know, our losses, Dayton, BYU amd Duke, I feel pretty good. Now we've got 18 bloodbaths, if you will, in league play and it starts Saturday in Charlottesville.

Nolley hit a 3-pointer to start the scoring and another to cap a 32-5 run over the first 12-plus minutes of the game. Radford scored 11 points during the stretch while the Hawks were just 2-of-17 shooting and committed five of their 14 turnovers.

Virginia Tech took a 45-22 lead into the break and then scored the first the first 15 second-half points to open a 38-point lead with 14 minutes to play.

“Twenty assists and two turnovers is quite, you know. impressive,” Young said. Keeping that up in conference play will be a challenge.

Eastern Shore: After losses at Penn State, Stanford, Oklahoma and Baylor, the Hawks return home to start MEAC play. No team in the league has a winning record so the road experience could be a big help in tight games.

Virginia Tech: The Hokies got the Christmas rust off but now comes the ACC and a pair of tough road games, at defending national champion Virginia and and then Syracuse. They have proven they can win with a 71-66 win over then-No. 3 Michigan State but they followed that up with losses to Dayton and BYU, all in the Maui Invitational. Virginia Tech sits at 1-1 in the conference, a season-opening 67-60 win at Clemson and a 14-point loss to Duke the first week of December.

Virginia Tech heads to Charlottesville to face No. 16 and defending national champion Virginia.