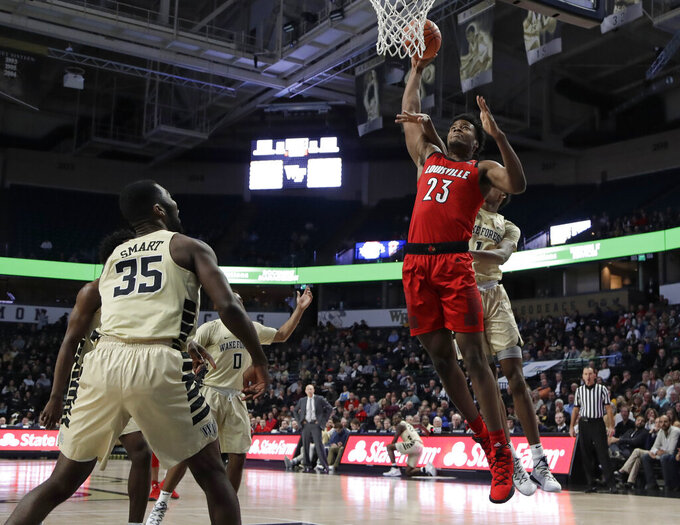 Louisville's Steven Enoch (23) is fouled as he drives to the basket against Wake Forest's Isaiah Mucius (1) during the first half of an NCAA college basketball game in Winston-Salem, N.C., Wednesday, Jan. 30, 2019. (AP Photo/Chuck Burton) 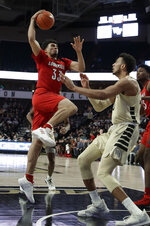 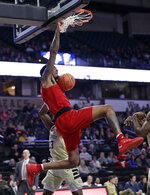 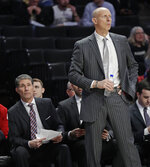 WINSTON-SALEM, N.C. (AP) — No. 15 Louisville had just polished off another romp on the road, and on the way back to the locker room, a staff member couldn't contain his joy.

"You feel very fortunate when you go on the road and win in the ACC," first-year coach Chris Mack said. "No matter who you play."

Dwayne Sutton added 17 points and 10 rebounds, Malik Williams finished with 13 points and Ryan McMahon had 12 points on four 3-pointers for the Cardinals (16-5, 7-1).

They shot 52 percent and led by 35 while keeping themselves even with three other one-loss teams — No. 2 Duke, No. 3 Virginia and No. 9 North Carolina — atop the Atlantic Coast Conference. In their only other visit to this state, they gave the Tar Heels their worst home loss under Roy Williams, an 83-62 beatdown on Jan. 12.

Nwora, who averages 18 points, had 17 in the first half while Ryan McMahon hit three 3s in roughly 5 minutes. Behind those two — and 8-of-13 shooting from 3-point range in the half — Louisville needed less than 15 minutes to build a 20-point lead. The Cardinals spent the rest of the game maintaining it.

"For the first 30 minutes, our guys really came to play," Mack said. "When you play a team that hasn't had much success, you worry about your own team not coming out and being at its best."

They shot a season-worst 27 percent and missed 13 of their first 14 3-pointers. They have lost seven of eight and are off to their fourth 1-7 start to league play in five years under coach Danny Manning.

"They delivered the first blow, and staggered us, and we didn't recover, to be honest with you," Manning said.

Louisville: The Cardinals are riding the hottest streak of their five years in the ACC. Their 7-1 start to league play is their best since joining this conference, and their best in any league since they opened 8-0 in the old Big East in 2008-09. But things are about to get tougher — their next four opponents are in the AP Top 25.

"To come away with a win was great," Mack said, "and now we move on to a big challenge on Saturday. As big as it gets."

Wake Forest: The Demon Deacons are off to yet another poor start to league play. They began 1-7 in the ACC in Manning's first season in 2014-15, opened 1-13 in the conference the following season and were 1-8 last season. That's bad, and this is worse: In none of those seasons did Wake Forest make a postseason tournament or finish above .500.

Louisville had 16 assists while Wake Forest had a season-low three. . The Demon Deacons have the ACC's worst defense inside the 3-point line, allowing their opponents to shoot 54 percent from there. They let Louisville make 19 of its 32 shots inside the arc.

Mack was on late coach Skip Prosser's staff at Wake Forest from 2001-04 and the Demon Deacons went 67-29 with three NCAA Tournaments during that time. His Xavier teams split two games in here, losing in 2013 and winning two years later. Mack said he rented a car during the visit and drove to Prosser's old house. "This was home," he said. "Not just the building — the people, the community."

Former Wake Forest coach Dino Gaudio is in his first year as an assistant on Mack's staff. Gaudio went 61-31 in three seasons with the Demon Deacons, and this was his first visit to the arena since his final team beat Clemson in March 2010 en route to an NCAA Tournament berth. He was fired a month later and spent time in broadcasting before Mack brought him in.