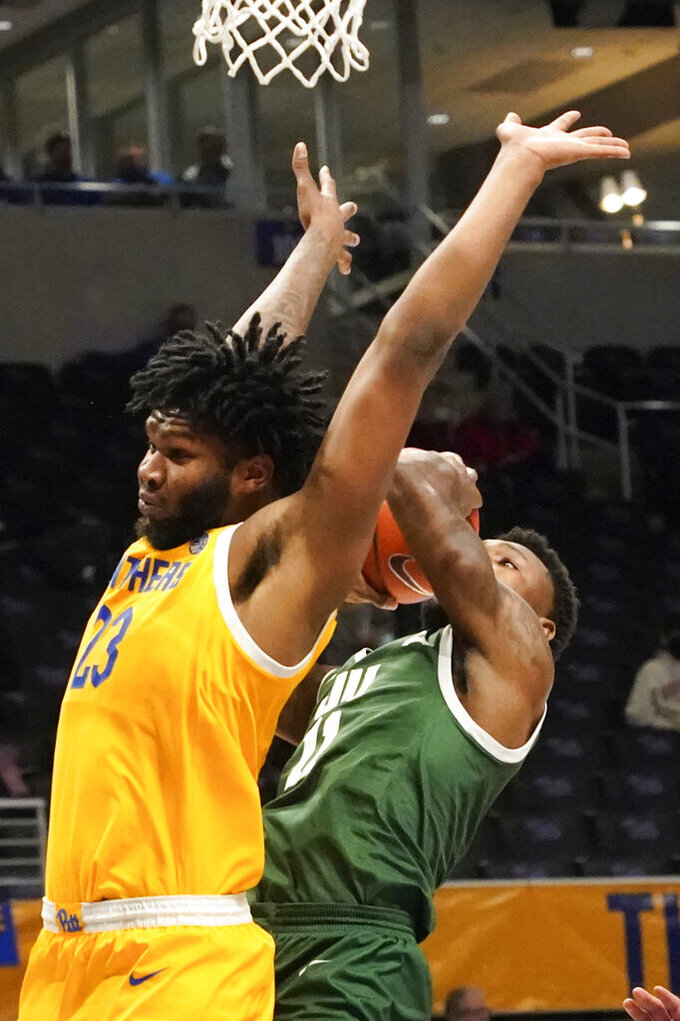 Jacksonville's Jordan Davis (11) tries to shoot from behind Pittsburgh's John Hugley (23) during the first half of an NCAA college basketball game, Tuesday, Dec. 21, 2021, in Pittsburgh. (AP Photo/Keith Srakocic)

PITTSBURGH (AP) — Femi Odukale scored 17 of his career-high-tying 28 points in the second half when Pittsburgh pulled way to beat Jacksonville 64-55 on Tuesday.

Odukale was 9-of-13 shooting with a personal-best five 3-pointers. Mouhamadou Gueye added 15 points — 10 in the second half — and had 12 rebounds plus four blocks for his first double-double this season. Jamarius Burton scored 12 points.

Kevion Nolan scored 22 points with a career-high six 3-pointers against a Pitt team that had held its last five opponents to under six makes from the arc per game.

Nolan hit a pair of 3-pointers early in the second half when the Dolphins (7-4) had their only leads. Odukale and Gueye responded by combining for all but two points in a 20-3 run and the Panthers went in front by 15 with eight minutes remaining. The lead stayed in double figures until Jacksonville got within eight with 23 seconds left.

Burton hit a jumper in the opening minute and Pitt (5-7) led the entire half but saw a 10-point lead cut to two, 26-24, by halftime after Nolan scored eight points in the final 10 minutes.

Pitt, coming off a dramatic 59-57 win over St. John's in Madison Square Garden, welcomed the comfortable latter minutes of this win after its five previous games were each decided by four points or fewer with the Panthers going 2-3.