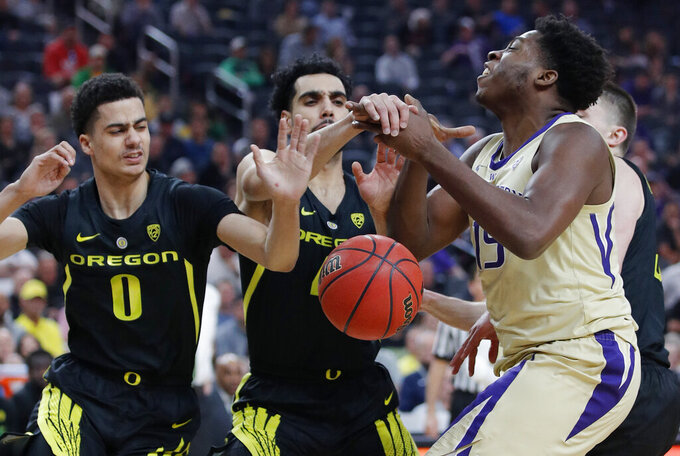 Oregon's Will Richardson, left, and Ehab Amin guard Washington's Noah Dickerson during the first half of an NCAA college basketball game in the final of the Pac-12 men's tournament Saturday, March 16, 2019, in Las Vegas. (AP Photo/John Locher) 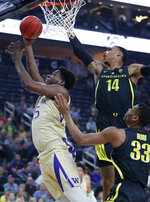 LAS VEGAS (AP) — Oregon was the Pac-12's preseason favorite, yet did not play like it through most of the season. The Ducks were inconsistent, lost their star freshman, had some ugly losses.

After four days of dominating defense, the Ducks are going dancing again.

"In my 39 years in coaching, I've never seen a team grow up that much that fast," Oregon coach Dana Altman said.

The Ducks (23-12) had some dark days during the regular season, notably a home loss to Texas Southern and an epic meltdown at home against UCLA. Freshman Bol Bol also went down with a season-ending foot injury, leaving Oregon without one of its best players.

Instead of playing as the favorites, the Ducks arrived in Las Vegas needing to win four games in four days to clinch an NCAA Tournament berth.

Sparked by a lineup change late in the regular season, Oregon was clearly the best team on the floor all four days in Sin City, returning the NCAA Tournament after missing the field of 68 a last season.

The Ducks (23-12) capped it by holding Washington to the lowest point total in championship game history and join Colorado in 2012 only team to win four Pac-12 tournament games in four days.

"Everyone kind of came together at the right time," said Oregon's Louis King, who had 15 points.

Showing no signs of fatigue after three games in three days, sixth-seeded Ducks clamped down on Washington in the second half turning a close game into a 16-point lead. Pritchard led the charge up top with four steals and Kenny Wooten did his damage on the back line, blocking four shots while changing several others.

"Game in game out, we just came prepared," said Pritchard, named tournament MVP after finishing with 20 points, seven assists and six rebounds in the title game. "Fatigue never hit us."

The top-seeded Huskies (26-8) looked like the tired team, struggling against Oregon's defensive pressure.

Washington had a long scoring drought in the second half, shot 33 percent and went 5 for 23 from the 3-point arc. The Huskies had no double-figure scorers and could have some anxious moments on Selection Sunday.

"I thought we got decent shots. We got the ball where we wanted to get it and sometimes the ball just doesn't fall," Washington coach Mike Hopkins said. "We tried to be aggressive and tried to get to the foul line. That didn't happen."

The Ducks flew into the title by winning the first three of four they needed to earn an automatic NCAA Tournament berth.

Oregon held Washington State and Utah under 55 points, and blocked 10 shots while rallying to beat Arizona State in overtime in the quarterfinals.

The Huskies had one fewer game after clinching a first-round bye, beating USC and Colorado by five points each.

Oregon and Washington split the regular-season series, each winning on the other's home court.

The Ducks' disruptive D caused problems early in the title game. Oregon gave Washington some problems with its full-court pressure and the Huskies had a stretch of one field goal in 11 attempts.

Washington's defense caused some similar problems for the Ducks before both teams started hitting some shots late in the half. Oregon led 28-26 at halftime.

The Ducks had a 16-0 run early in the second half to go up 46-28, holding the Huskies scoreless for eight minutes. Wooten had consecutive blocked shots during the run — one while he was on the way down.

Huskies leading scorer Jaylen Nowell also headed to the bench after picking up his fourth foul with 14 minutes left. Nowell returned three minutes later, but Washington continued to struggle against Oregon's defense. The Huskies shot 6 of 27 and 3 of 12 from 3 in the second half.

"They're very long," said Nowell, who had eight points on 2-of-8 shooting. "They've got Kenny Wooten in there blocking shots, so when you get past one person, they've got a lot of help coming and we just didn't get any shots today."

Oregon's defensive dominance coincided with Altman's decision to have four 6-foot-9 players in the starting lineup. The Ducks will roll into the NCAA Tournament as one of the bracket's hottest teams.

Washington ran into a buzz saw in the title game and will have to wait out Selection Sunday to see if its resume stacks up well enough.

Oregon is headed to the NCAA Tournament for the first time since reaching the Final Four in 2017.

Washington must await its fate.