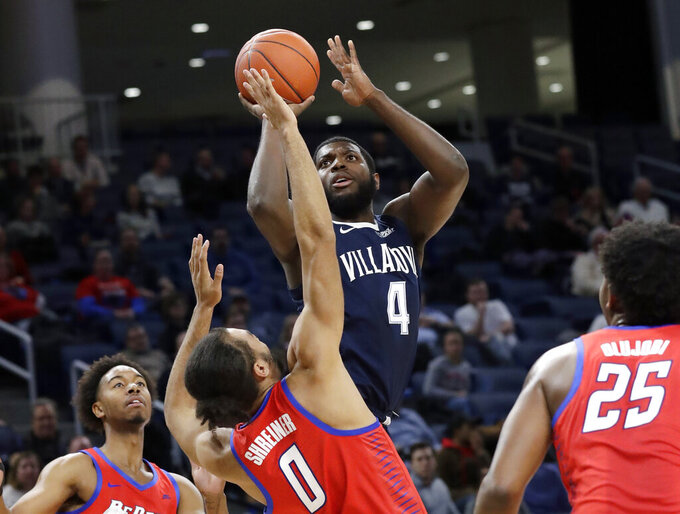 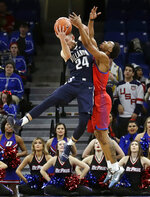 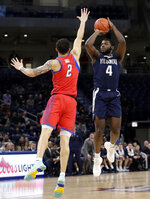 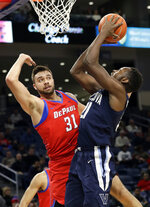 CHICAGO (AP) — Villanova is making shots, piling up wins and looking more like the team that won the NCAA championship for the second time in three years last season.

DePaul coach Dave Leitao didn't see that when the two teams played a few weeks ago. He noticed the difference on Wednesday night.

Freshman forward Saddiq Bey matched a career high with 16 points and set one with 11 rebounds for Villanova. He shot 4 of 6 on 3-pointers.

The Wildcats (17-4, 8-0 Big East) hit 15 from beyond the arc after making 17 in a romp over Seton Hall on Sunday. They also committed just three turnovers while winning their 18th straight against the Blue Demons (11-9, 3-6) and defeating them for the second time this month.

"They're markedly better than they were when we played them in Philadelphia," Leitao said. "Coming off of a game where they made 17 3s, to make 15 is pretty remarkable. They're getting back to the team that they were last year."

Femi Olujobi led DePaul with 20 points and eight rebounds. Eli Cain scored 17, but Paul Reed was held to six points and six rebounds after averaging 18.2 points and 10.2 boards over the previous six games.

DePaul lost for the fourth time in five games despite shooting 53 percent and committing a respectable 11 turnovers.

"Our defense, I said this earlier, it wasn't getting as many misses," Villanova coach Jay Wright said. "But we were creating some turnovers that impacted us, and we played pretty well offensively. I think they are a really good offensive team. You have to score against them. They have so many weapons. They've got as good an inside game as anybody. They have big guards. (Devin) Gage drives the ball. They're a really good team."

While much of Chicago was shut down because of frigid conditions, with temperatures dropping to around minus-23, the game went on as scheduled. And once again, Villanova had a tough time with DePaul.

After rallying from 14 down to win by five at home on Jan. 2, the Wildcats led 40-36 at halftime after Cain nailed a step-back 3 in front of the Villanova bench at the buzzer.

THE SHOW MUST GO ON

Leitao was asked whether postponing the game was discussed.

"Not really," he said. "I've never been in my lifetime in a situation where it's been so cold. But obviously, we've all been around snowstorms, which makes it a little bit more obvious. But I don't think that we really had any of those discussions. I know at least I haven't, and I don't think the university did, either."

EYES ON THE PRIZE

Booth on whether Villanova experienced a letdown: "No. You come on the road against a real good DePaul team who beat Seton Hall up twice (75-74 and 97-93), so we definitely treat them as any other opponent. It's the same game. We prepare for them in a new way. We moved on from Seton Hall and we focused on DePaul this week."

Villanova: The Wildcats have been rolling along since consecutive three-point losses to Penn and Kansas in mid-December knocked them out of the Top 25.

DePaul: The Blue Demons are in familiar territory, tied for last in the Big East with Butler.

Villanova: The Wildcats hope to keep their streak going when they host Georgetown on Sunday.

DePaul: The Blue Demons will try to bounce back when they host Providence on Saturday. DePaul lost 70-67 to the Friars on Sunday despite Reed's 20 points and nine rebounds.