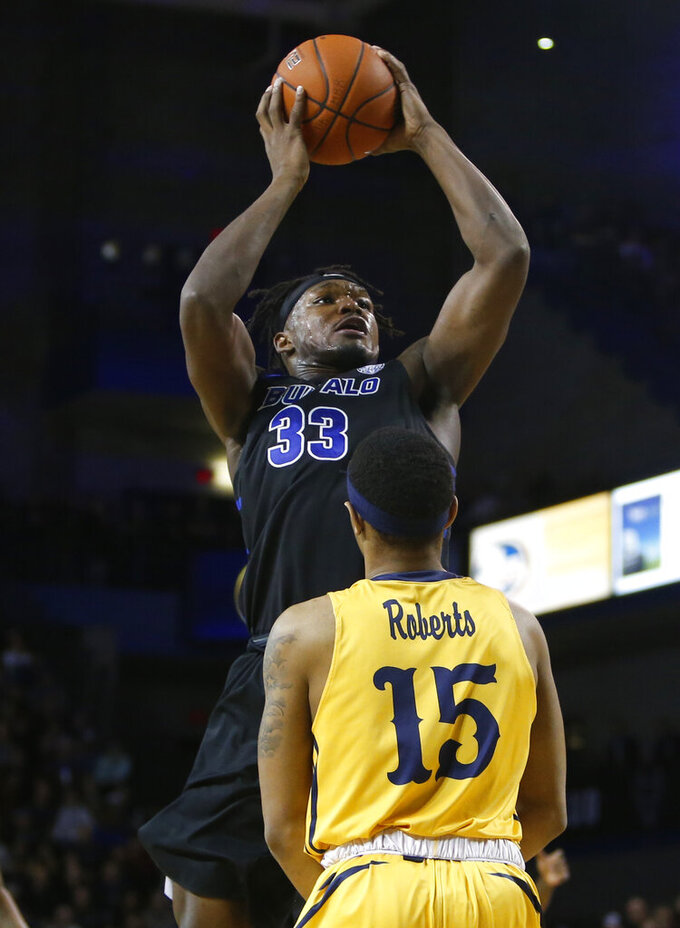 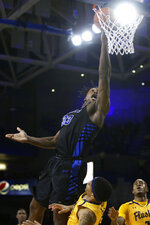 AMHERST, N.Y. (AP) — Having played Buffalo toe-to-toe in Kent State's last meeting, coach Rob Senderoff was feeling good about the Golden Flashes holding the lead with two minutes left in the first half.

It took 75 seconds for the Bulls to dash any of Senderoff's upset expectations.

Nick Perkins scored eight of his career-high 27 points, and No. 25 Buffalo fed off the electrifying 10-0 run in rolling to an 80-57 victory on Friday night.

"What makes them very good is that there's two things I'll give them a lot of credit for," Senderoff said. "One is when you make mistakes they capitalize. The other is when they smell blood, they're like sharks in the water."

Buffalo (24-3, 12-2 Mid-American Conference) looked nothing like the inconsistent team that stumbled through a 2-2 stretch three weeks ago, which included an 88-79 win at Kent State.

Instead, the Bulls have suddenly rediscovered a relentless and opportunistic swagger in carrying over the momentum from a dominating 114-67 win over Ohio on Tuesday.

"We need to send a statement," Buffalo coach Nate Oats said. "We weren't playing like that up until this week. And now I think we're showing we can."

Buffalo won its 24th consecutive home game in tying No. 5 Tennessee for the second longest streak in the nation. No. 9 Houston has won 32 straight home games.

Buffalo moved into sole possession of first place in the East Division following Bowling Green's loss to Ohio. And the win also clinched the Bulls a bye into the quarterfinals of the MAC tournament next month as they can't finish lower than second in the East.

Antonio Williams scored 17 before fouling out to lead Kent State (19-8, 8-6), which lost consecutive games for the first time since a four-game losing streak in February 2018. Jaylin Walker scored 12 to up his career total to 1,692 and move into third place on the school list, ahead of Jimmy Hall (1,683).

Four days after setting a school record by hitting 19 3-point baskets, the Bulls were sluggish in missing their first eight against Kent State.

The drought ended when Perkins sparked the run by putting the Bulls up 28-27. He scored again by grabbing the rebound to put back Davonta Jordan missing a 3-point attempt. After Walker turned over the inbounds pass, CJ Massinburg missed a 3-point attempt, which Jayvon Graves put in with a thundering dunk to get the crowd on its feet with 16 seconds left.

The crowd was still standing when Jalen Avery committed an offensive foul, and the Bulls ran the floor with Jordan driving the baseline before feeding Perkins, who banked in a 3-point attempt at the buzzer.

"When I hit the first one, I definitely thought we were going to get on a roll," Perkins said. "It all happened so quick, actually. It was fun."

The Golden Flashes were so worn down by Buffalo's relentless attack that they allowed the Bulls to rebound three consecutive misses before scoring.

Perkins missed from the outside. Then It was Jordan's turn followed by Jeremy Harris. Jordan corralled the final rebound and hit a layup while being fouled and then completing the three-point play to put Buffalo up 55-39 with 12:06 remaining.

The announced crowd of 6,688 was the largest since Buffalo's Alumni Arena was reconfigured 13 years ago. The largest home crowd remain 8,971 for a game in 2004.

Kent State: Walker is showing signs of slumping despite beginning the day ranked 23rd in the nation in averaging 21.8 points. He's now combined to score just 41 points while hitting just 9 of 41 from the field, including 2 of 15 from 3-point range.

Buffalo: Beginning to erase whatever doubts Bulls raised during a 2-2 stretch that ended with a 92-88 loss at Bowling Green. If the Bulls were unhappy by winning two last week and not moving in the rankings, they should expect some reward from the voters once the next poll comes out.