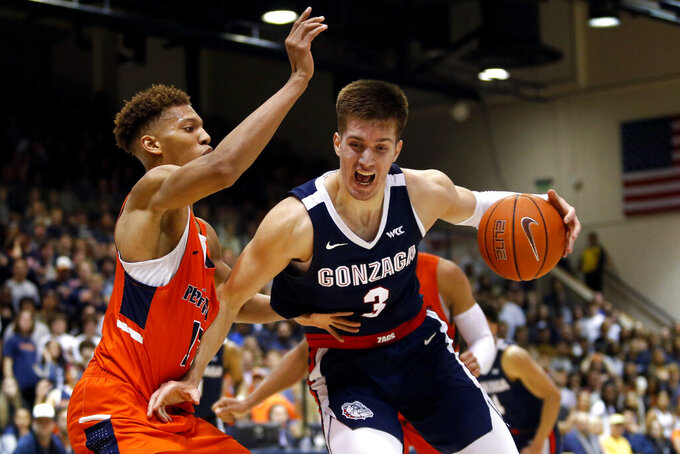 MALIBU, Calif. (AP) — Second-ranked Gonzaga hasn't had many ugly wins this season, but Saturday night's game against Pepperdine was something it needed with the NCAA Tournament less than a month away.

The Bulldogs had some early foul trouble and were out of sync until getting into a rhythm in the second half and pulling away for an 89-77 victory that extended their winning streak to 18 games.

“It's one of the better wins we've had this year with what we dealt with and powered through it. It wasn't going perfect for long stretches but we found a way. That's how you have to win in March,” Gonzaga coach Mark Few said.

The Bulldogs were missing Killian Tillie, who is second on the team in scoring, due to an ankle injury and then had two starters pick up two fouls apiece in the first half. However, Filip Petrusev was able to come through when needed.

The sophomore forward had 27 points and 12 rebounds for his eighth double-double of the season. Petrusev scored 20 points in the first half as Gonzaga kept feeding the ball to him down low in the paint.

“I knew I was going to have to play more but it was tough to execute all those coverages. I knew they were going to foul me but also I have to hit open layups when I get an angle,” said Petrusev, who is averaging 24 points and 9.8 rebounds in the past five games.

The Bulldogs (26-1, 11-0 West Coast Conference) had only seven players see action, with all but one scoring in double figures. Corey Kispert had 19 points, including five 3-pointers.

The game was tied at 43 before Gonzaga took control with a 13-2 run. Kispert's 3-pointer with 15:33 remaining gave the Bulldogs a 46-43 advantage, and Joel Ayayi had five points during the spurt.

Gonzaga's largest lead was 14 late in the second half. The Bulldogs have won 39 straight regular-season WCC games, currently the longest streak of its kind in the nation.

“We were flustered, had a lot of adversity and a hot guard (Pepperdine's Colbey Ross) going at us before we were able to get going. It was good for us to face that and solve those things,” Few said.

Petrusev scored the last seven points during a run of nine straight by Gonzaga to give the Bulldogs a 28-20 lead with 7:30 left in the first half.

Gonzaga extended its lead to nine before the Waves responded with a 13-3 rally. Edwards had seven points during the spurt, including a 3 with 1:32 remaining to put them up 36-35. Gonzaga closed the half with five consecutive points to lead 40-36 at halftime.

“We made too many mistakes and they capitalized on most of them,” Pepperdine coach Lorenzo Romar said. “We were able to hold the fort in the first half. Our team has been pretty resilient all year and there were too many times we had to fight back tonight.”

Gonzaga: The Bulldogs have won 39 straight against Pepperdine and are 43-2 during Few's tenure. The last time the Waves beat the Bulldogs was in 2002.

Pepperdine: The Waves were fifth in the conference in 3-point percentage coming into the game but missed 15 of 20 from beyond the arc. The 25% mark was their fifth-worst this season.

Pepperdine: Plays at Portland on Thursday.