Pitt looks to take another step forward under Capel 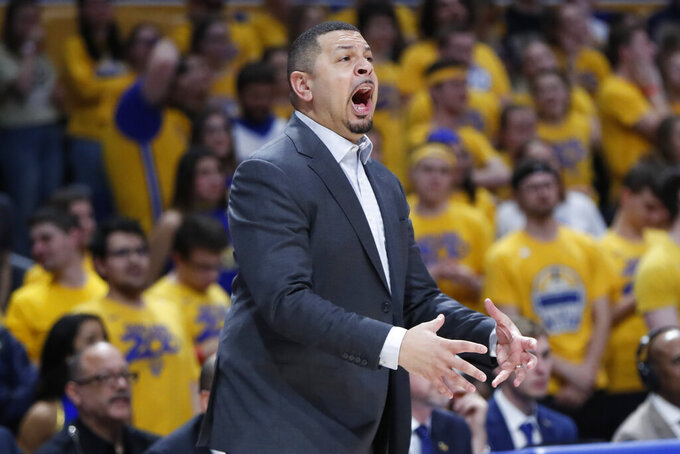 Pittsburgh head coach Jeff Capel instructs his team as they play against Syracuse during the first half of an NCAA college basketball game, Wednesday, Feb. 26, 2020, in Pittsburgh. Capel enters his third season at Pittsburgh hoping the Panthers can hang tough in the ACC. Promising starts in each of his first two years on the job ended with the Panthers in a tailspin. (AP Photo/Keith Srakocic)

Call it symbolic not only of 2020, but where the Panthers are at under Capel's watch. While Pitt has taken a significant step forward since Capel took over for Kevin Stallings in 2018, how far they climb this time around could depend on whether Nike Sibande is along for the ride.

Sibande's request to be declared immediately eligible after transferring to Pitt from Miami (Ohio) was denied by the NCAA. The Panthers filed an appeal but are still awaiting a final decision.

If Sibande is good to go, he'll take some of the pressure off point guard Xavier Johnson to try and do it all. Sibande averaged 15.1 points per game in three years with the RedHawks and has drawn raves from his new teammates for his explosiveness.

"He reminds me of (Memphis Grizzlies star) Ja Morant,” junior forward Au’Diese Toney said. “That first step and that explosiveness he’s got in him, it’s similar to Ja, for real. That’s why I hope they free him, so he can play.”

The Panthers need help in the backcourt after Trey McGowens and Ryan Murphy transferred after an uneven 2019-20 in which Pitt finished 16-17 overall and 6-14 in the Atlantic Coast Conference. In some ways, Capel's second year on the job mirrored his first. The Panthers were 15-9 overall and 6-7 in the conference after a win over Boston College on Feb. 8. Seven straight losses to end the regular season followed, with five of them by double figures.

Capel hinted at times that his group grew complacent following some early success. Having Sibande to go along with Johnson, sophomore Justin Champagne — whose 12.7 points as a freshman and became the team's go-to offensive weapon late in the year — and the versatile Toney would give the Panthers four legitimate scorers.

"He had a really good experience at Miami of Ohio,” Capel said. “He really cared about his coaches, he cared about the people there and he worked his butt off for three years there. We’re hopeful the NCAA will grant the appeal and he’ll be able to play.”

Finding someone to score won't be nearly as problematic for the Panthers as finding someone to defend, particularly in the middle. Pitt finished near the bottom of the ACC in rebounds (13th) and opponents shooting percentage (14th). Too often the Panthers would find themselves outclassed and outmuscled in the paint, a major issue for a team whose offense was spotty at best.

Senior center Terrell Brown returns for his senior year. While he's shown the ability to use his length to disrupt shots, the 6-foot-10 Brown averaged just 3.5 rebounds in 18 minutes last season while his playing time constantly fluctuated. Newcomers like freshmen Max Amadsun (6-10) and Noah Collier (6-8) are intriguing, the 6-6 Toney might have to be what he was last year: Pitt's most competitive player in the dirty areas around the rim.

The COVID-19 pandemic laid waste to Pitt's nonconference schedule. The series with rival West Virginia will take a year off and the Panthers will not play crosstown foe Duquesne in the annual “City Game” for the second straight season, though it's unclear what impact the pandemic had on the decision. The two teams whose campuses are separated by two miles have met regularly since 1932.

The school is planning to allow 1,250 people into the Petersen Events Center for games, though with COVID-19 numbers rising in Allegheny County, it's unclear whether Pitt will be able to commit to that by the time their home opener arrives.

The ACC schedule is set, just not set in stone. Several games have floating dates while the league's TV partners try to figure out how everything fits. Pitt's nonconference schedule also remains a work in progress save for a trip to Northwestern on Dec. 9 as part of the ACC/Big Ten Challenge.

"This season is going to look different in nearly every way, but it is going to be a great opportunity for our program to compete and grow in the face of adversity,” Capel said.