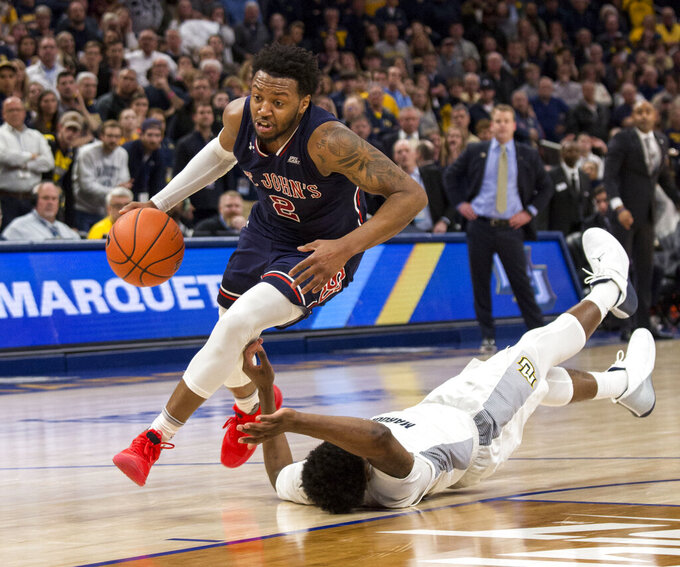 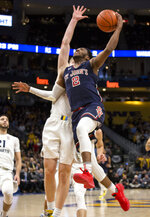 MILWAUKEE (AP) — After No. 10 Marquette erased a 15-point deficit, St. John's had the ball in the right spot in the closing seconds — Shamorie Ponds' hands.

Ponds scored 28 points, including a go-ahead layup with 16 seconds left, to give St. John's a 70-69 victory over the Golden Eagles on Tuesday night.

The loss ended an eight-game winning streak for the Golden Eagles and was their first defeat at their new home this season after 14 victories. Both of their conference losses have come against St. John's.

"I was just trying to stay composed and not get sped up," said Ponds, who had 13 of St. John's final 14 points. "It was getting loud in there when they were making their run. I was just trying to slow the game down. We pretty much had a 15-point lead, they cut it and took the lead. You just try to stay composed and try to keep their crowd out of it."

Marquette, which trailed 49-34 early in the second half, took a 69-68 lead on a 3-pointer from the right corner by Sacar Amin with 32 seconds left.

On the ensuing possession, Anim slipped, allowing Ponds to drive for the basket. Marquette's Markus Howard missed an off-balance 3-pointer from the top of the key with 1.9 seconds left.

"I was just in attack mode and I got by him and I finished at the rim," Ponds said. "I just didn't feel him behind me, and I just tried to hurry and put it up because the shot-blocker was coming."

Marvin Clark II was fouled on the rebound. He missed both free throws, including the second one on purpose. Sam Hauser rebounded for Marquette, but missed the desperation heave that harmlessly hit the bottom of the backboard.

"We've got some length and some guys who can move their feet, so I think the switching helps," St. John's coach Chris Mullin said. "But you've still got to guard them. Howard can get free; he can get 40 in a half. And the Hauser brothers, if you give them an inch, they'll make shots. Overall, we did a really, really good job again. They got hot toward the end and started getting free a little bit.

After a missed drive by Ponds, Marquette pushed the ball and Howard found Amin for his go-ahead 3.

The Red Storm took their biggest lead of the half at 25-13 before Howard finally shook loose. Howard missed his first six shots, including three from beyond the arc, before scoring nine consecutive points for Marquette to cut the lead to 27-22.

St. John's: The Red Storm is 10-2 at home, 9-1 at Carnesecca Arena and 1-1 at Madison Square Garden. St. John's next three games are at home against Providence at MSG, Butler at Carnesseca, and No. 14 Villanova at MSG.

Marquette: The Golden Eagles have to regroup against No. 14 Villanova, then travel to DePaul. Although Marquette had won eight straight, four had been by five points or less.

Howard, who entered as the Big East's leading scorer, had 17 points, but was just 5 of 17 from the field, including 1 of 9 inside the arc. He also was held to just three free-throw attempts. In the earlier loss at St. John's, he managed just 8 points on 2-of-15 shooting.