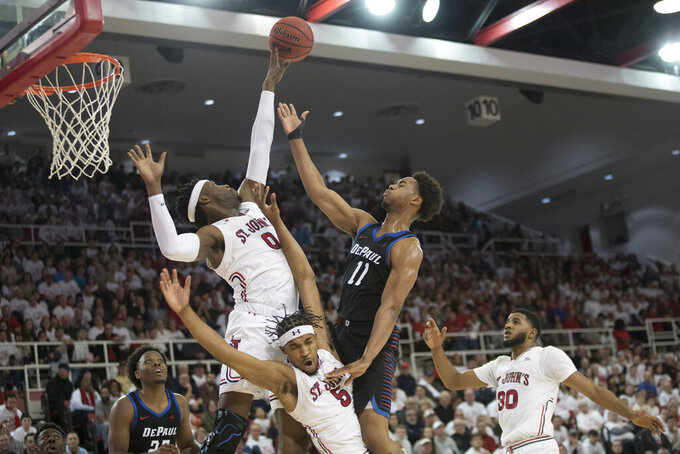 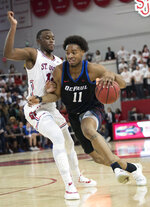 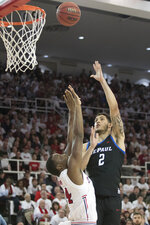 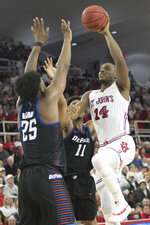 NEW YORK (AP) — With star guard Shamorie Ponds watching from the sideline for No. 24 St. John's, it was DePaul forward Femi Olujobi who turned Carnesecca Arena into his house for one night.

Olujobi had a season-high 27 points and eight rebounds in a fantastic New York homecoming, and DePaul beat the short-handed Red Storm 79-71 on Saturday for its first win over a ranked team in almost three years.

"A little vendetta," Olujobi said with a wry grin as he received hugs and handshakes from a parade of pals. "I had a little extra energy to come play St. John's."

Ponds sat out with a lower back strain for the Red Storm (14-3, 2-3 Big East), who dropped their second consecutive game since moving into the AP Top 25 for the first time in four years.

"Anytime you take your best player off the team, it has an effect," coach Chris Mullin said. "I thought we played OK. A little passive, I thought."

"We've just got to play through," the coach added.

Paul Reed added 18 points and 10 rebounds for the Blue Demons (10-5, 2-2), who snapped a 17-game skid against ranked opponents that dated to a victory over No. 11 Providence in February 2016. The last time DePaul defeated a ranked foe on the road was a season earlier, at No. 24 Seton Hall.

Olujobi, from nearby Long Island, was a force inside while shooting 11 of 19. He got fired up after drawing a foul on a steal and breakaway dunk early in the second half.

"I love talking trash," Olujobi said with a smile.

The graduate transfer from North Carolina A&T, who began his college career at Oakland (Michigan), estimated he had about 60 friends and family members in the stands. He said he was always interested in playing for St. John's and the school recruited him, but it "just didn't work out."

"I found my fit at DePaul," Olujobi said.

LJ Figueroa led the Red Storm with 23 points. Justin Simon added 20 points and seven assists, and Marvin Clark II had 14 points and 12 rebounds. Clark went 1 of 7 from 3-point range and St. John's was 5 for 19 (26 percent) outside the arc.

Playing in front of a sellout crowd on campus, St. John's was whistled for 21 fouls to nine for DePaul. Mullin flashed his anger and was called for a technical with 5:04 remaining.

DePaul: Trying for years to climb up from the bottom of the Big East, this was another significant step in the right direction for the Blue Demons following their 75-74 win over Seton Hall at home on Sunday. Playing a ranked team for the first time this season, they improved to 1-3 on the road overall. DePaul also won at Carnesecca Arena last year, but St. John's had won 14 of the past 18 meetings entering Saturday.

"We're at the most important stage of our program in that we're figuring out how to win, particularly late-game situations," coach Dave Leitao said. "Today, they got over the hump a little bit."

St. John's: With the Red Storm looking to stay close in the Big East race and build an NCAA Tournament resume, this was a damaging loss — with or without Ponds. St. John's, which led by double digits on the road in the second half of its previous two defeats, trailed nearly the entire way this time and fell to 9-1 at home.

Ponds watched quietly from the bench in sweat pants and a red polo shirt. The junior guard, the Big East preseason player of the year, ranks third in the league in scoring at 20.6 points per game. He is first in assists (6.0) and steals (2.7), and was one of 25 players in the country selected to the midseason watch list for the Wooden Award this week.

St. John's said Ponds initially was injured at Georgetown last Saturday, when he scored 37 points during an overtime victory. He played through the problem and had 23 points Tuesday night in a 76-71 loss at defending national champion Villanova.

Bryan Trimble Jr. started in Ponds' place and finished with three points and six rebounds in 31 minutes. Without Ponds running the point, St. John's had more turnovers than its opponent for the first time all season.

St. John's honored late star Solly Walker, the first black player to wear a varsity uniform at the school. Walker helped lead St. John's to the 1952 NCAA championship game and the 1953 NIT title game and was inducted into the university's athletic Hall of Fame in 1993. His family was on hand for a ceremony to announce the newly created Solly Walker Academic Support Services Fund and the dedication of the Solly Walker Academic Study Hall.

DePaul: Back home Wednesday night against Butler, looking to snap a nine-game losing streak in the series.