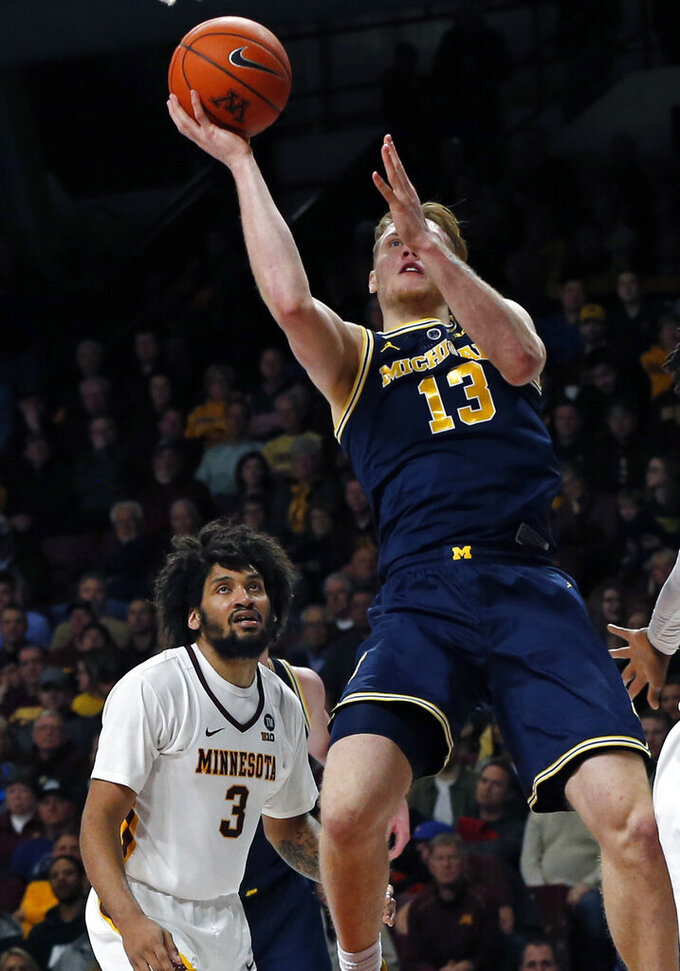 Michigan's Ignas Brazdeikis, right, lays up as Minnesota's Jordan Murphy looks on in the second half of an NCAA college basketball game Thursday, Feb. 21, 2019, in Minneapolis. (AP Photo/Jim Mone) 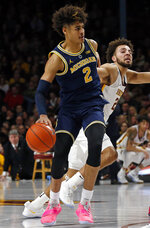 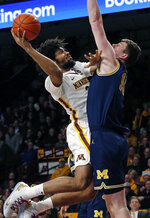 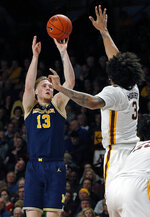 MINNEAPOLIS (AP) — If there's a weakness for these Michigan Wolverines to be worried about, it's lurking behind the 3-point line.

Jordan Poole and Jon Teske swished aside the concern for at least one night.

Poole scored 22 points to lead a long-range shooting spree by seventh-ranked Michigan, and the Wolverines beat Minnesota 69-60 on Thursday to set up a much-anticipated matchup this weekend against rival Michigan State with first place in the Big Ten at stake.

Teske had 17 points, seven rebounds and five blocks and Ignas Brazdeikis added 10 points for the Wolverines (24-3, 13-3), who are tied with the Spartans at the top of the conference. Purdue is a half-game behind.

Michigan went 13 for 28 from behind the 3-point line, matching a season best for makes in Big Ten play, with Poole going 5 for 10 and Teske 3 of 6. In the previous three games, Poole was 3 for 17. Both Teske and point guard Zavier Simpson are shooting below 30 percent for the season.

"I know what I see in practice and I know if we're going to compete for the championship — Big Ten, Big Ten Tournament, national championship — then we've got to be able to score more," Beilein said.

These well-balanced Wolverines, who had nine points and nine rebounds from Charles Matthews and 12 assists by Simpson, needed a buzzer-beating jumper by Matthews to stave off a late surge by the Gophers for a 59-57 victory at home on Jan. 22. Michigan made only 3 of 22 from behind the arc in that game.

This time, the Wolverines experienced no duress.

"I think they were pretty confident," Minnesota coach Richard Pitino said, "and they were just teeing it up."

The Wolverines have won 13 of the last 14 games in the series, including nine of 10 since Pitino took over. Jordan Murphy (18 points, 15 rebounds) and Daniel Oturu (18 points, 12 rebounds) gave the Gophers (17-10, 7-9) plenty of production in the paint, but they missed nine of their 10 attempts from 3-point range.

"We kind of let that affect our defensive effort," Murphy said.

Oturu had a double-double by halftime, beating the buzzer with his putback to bring the Gophers to 28-18, but that was still their lowest score of any half all season. The Wolverines built a lead as large as 21 points in the second half, sinking 3-pointer after 3-pointer whenever the Gophers were on the verge of a run.

The Wolverines, who trailed for only 31 seconds, used an 11-0 run over a 5:17 stretch early in the first half to take charge. Poole played particularly effective defense on Gabe Kalscheur, the best 3-point shooter in Minnesota's lineup by limiting him to three attempts and one make.

"I was just locked in, and like they said, the offensive side will come with it," Poole said. "

The Wolverines, who are allowing 57.7 points per game that's the third-lowest average of all NCAA Division I teams, didn't need much time to fluster the Gophers. Amir Coffey missed his first 10 shots from the floor and finished 2 for 15 for six points.

Some of Coffey's attempts to get the Gophers going were forced off-balance heaves, but his first open look was an air-balled 3-pointer.

In a sign of how poorly the night was going for the Gophers on offense and how much the Wolverines were in sync, Dupree McBrayer made a slick pass from the perimeter to the baseline for Eric Curry on a late-first-half possession. As soon as Curry brought the ball down to waist level in his advance to the basket, Isaiah Livers stuffed his layup attempt cold to preserve a 24-14 lead.

Pitino saw his players resort to trying to draw fouls rather than work for better shots, after the early struggle.

"It's hard when that ball's not going in the basket. It deflates you," Pitino said. "You've got to get tougher, and you've got to dig in."

Michigan: The Wolverines had lost three of their previous five conference road games including at last-place Penn State on Feb. 12. The moxie they exhibited in taking immediate control and not letting up in what can be one of the conference's loudest arenas will serve them well as they head into March.

"Defensively right now I think that they understand that this is the one consistent thing we can have every day," Beilein said.

Minnesota: The Gophers followed their most complete performance of Big Ten play, a 21-point victory over Indiana on Saturday, with one of their biggest flops of the season. They're running out of games to try to add to their list of quality wins for the NCAA Tournament committee to consider.

"Same place. Same players," Pitino said. "It's just a matter of getting back into the gym and getting confident."

Michigan: Hosts Michigan State on Sunday, with the intrastate rematch and regular-season finale set for March 9.

Minnesota: Plays at Rutgers on Sunday night, the first of three road games remaining for the Gophers.