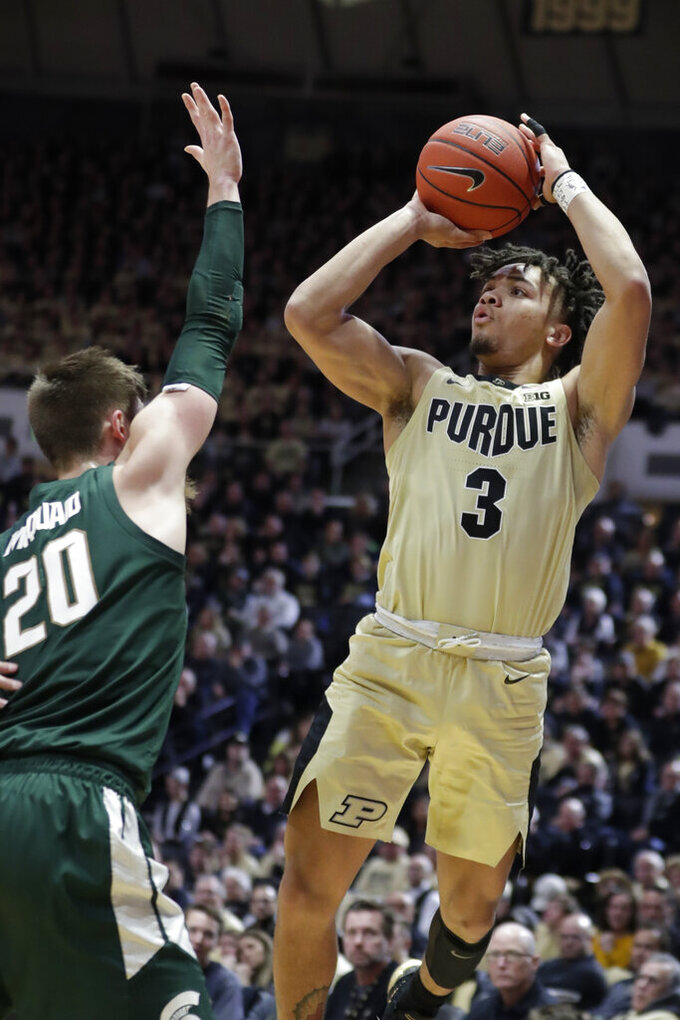 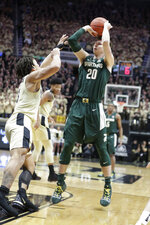 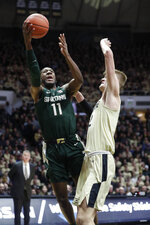 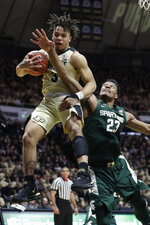 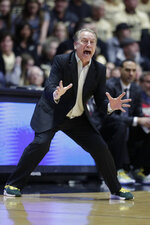 Then Nojel Eastern rewrote the script.

Ryan Cline scored 17 points and Eastern overcame his season-long free throw troubles by making six straight down the stretch to help the Boilermakers fend off a frantic late charge and hang on for a 73-63 upset Sunday over the sixth-ranked Spartans.

"They kind of get down six or 20 (in road games) and they have you right where they want you," coach Matt Painter said, referring to the Spartans' proclivity to come back. "You're nervous the whole damn time. I was nervous till 30 seconds (left)."

With good reason, too.

Purdue opened with a 19-6 run, extended the margin to 23 midway through the second half before nearly giving it all away during a drought in which it missed eight straight shots. Michigan State took advantage by going on a 24-5 run to cut the deficit to 60-56 with 5:14 to play.

Michigan State (18-3, 9-1) had three significant winning streaks end — a 13-game streak that dated to November, a 21-game regular-season streak against conference foes and a 12-game road streak in league play.

To coach Tom Izzo, the obvious was difference: Purdue played better defense, was better in the paint and had a better supporting cast.

"The stars didn't beat us in the first half, the bench did and that's a great tribute to Purdue and what they're doing with the development of their bench," he said. "Our ineptness on the boards was probably the difference in the game."

Purdue has won four in a row and 12 straight at home.

But the Boilermakers made up for it by getting five 3-pointers and four assists from Cline, three 3s and 11 points from Aaron Wheeler, 10 points and eight rebounds from Matt Haarms. Edwards had four rebounds, three assists and three steals and Eastern wound up with 12 points — the last six at the line.

"You know if he misses a couple front ends there, you're in a different position and you have a different feeling," Painter said.

Cassius Winston had 23 points, seven rebounds and eight assists to lead the Spartans. Matt McQuaid had 12 points in a game Michigan State never took the lead.

Michigan State: Despite shooting poorly and getting beat at their own game, the Spartans showed why they are one of America's best teams. Sure, they're now tied with Michigan for the conference lead. And yes, they'll fall in the polls after this loss but it shouldn't be a precipitous drop.

Purdue: The Boilermakers have been playing good basketball for a while — and now they have the signature win they needed to seal the perception. By getting key contributions out of Edwards' supporting cast, they moved within a game of the Big Ten lead and should reappear in the Top 25 soon.

Michigan State: Suffered its first loss in 61 days after posting an average victory margin of 16.8 points. ... The Spartans scored 19 points in the first half, surpassing their previous low mark for scoring in a half. They had 28 in the second half at Florida on Dec. 8.... Michigan State shot 39.3 percent from the field was 9 of 26 on 3s.

Purdue: At Penn State on Thursday.