Purdue relies on defense to roll past Chicago St. 93-49 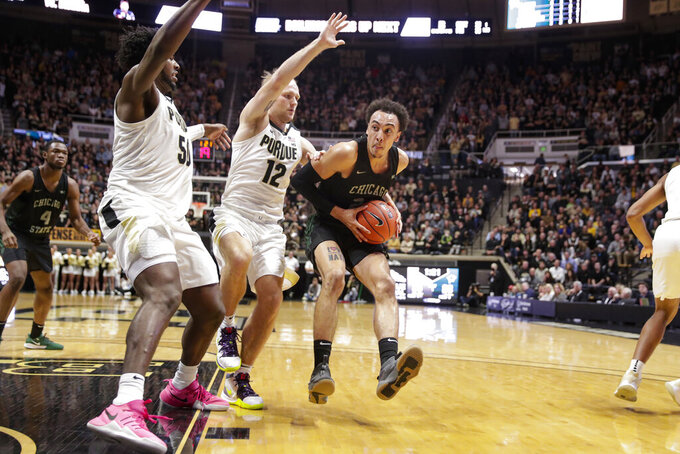 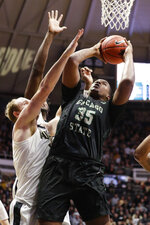 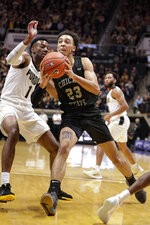 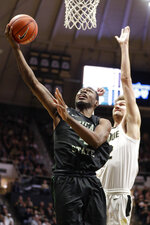 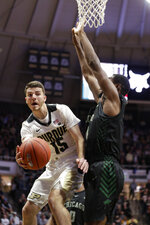 The Boilermakers may need to rely on that one-two punch until their shooters catch up.

They forced 17 turnovers, held Chicago State to two points during a decisive 10-minute stretch and grabbed 23 offensive rebounds as they pulled away for a 93-49 rout.

“I think we were lacking on defense,” Purdue guard Jahaad Proctor said. “But we got some energy, we shifted the defense and started getting some rebounds.”

A combination that completely changed the game — and perhaps the Boilermakers’ season.

But it wasn’t as easy as the final score made it seem.

The Cougars (1-3) spent most of the first half trading baskets and even took a 28-25 lead with 4:56 left in the first half. Then the Boilermakers changed things up and Chicago State never recovered.

Trevion Williams scored five of his nine points in a 13-0 run that gave Purdue a 38-28 halftime lead. And after Chicago State scored the first basket of the second half, things only got worse.

Purdue used its rebounding edge to fuel a 16-0 run that finally ended when Xavier Johnson made the second of two free throws with 14:21 left — to end Purdue’s 29-2 spurt over a 10½-minute span.

“The thing you have to strive to do is to beat good teams when you don't shoot the ball well and we're not there yet,” he said. “You are going to face good defensive teams and the ball's not going to go in and you’ve still got to find a way to win and we're just not there right now. Hopefully, the offense will be better.”

The Cougars were led by Johnson with 12 points and Andrew Lewis with 11 as they lost their third straight and fell to 0-51 against Big Ten foes as a Division I team.

Chicago State: Coach Lance Irvin’s team will be undersized and overwhelmed against most power-conference schools. But the Cougars fought hard, hung around and gave Purdue everything it could handle in the first half. They just need to figure out how to trade jabs for 40 minutes.

Purdue: Don’t get fooled by the lopsided score. The Boilermakers are still struggling to find consistency on offense. So while defense, size and rebounding can carry them through most of the nonconference schedule, they must play better offensively to compete for a Big Ten title.

Chicago State: The Cougars scored 28 points in the first half falling six points short of equaling their final total from their first road game this season. ... After shooting 45.8% in the first half, they were just 28% from the field in the second half and finished at 36.7%. ... The Cougars are 0-4 all-time against Purdue.

Purdue: Proctor finished with 13 points. ... The Boilermakers had a 25-6 advantage in points off turnovers, a 33-6 scoring edge in second-chance points and a 52-6 advantage in points off the bench. ... Purdue has won 24 games by 30 or more points since 2015-16. ... Purdue improved to 17-4 in in-season tournaments with its opening victory in the Emerald Coast Classic.

While Painter appreciated the way his team responded to the challenge of starting the second half fast, he was impressed with what he saw out of Chicago State early.

The Cougars will attempt to end their losing streak Tuesday when they host Purdue-Northwest.

Purdue gets a full week to find solutions before hosting Jacksonville State next Saturday.