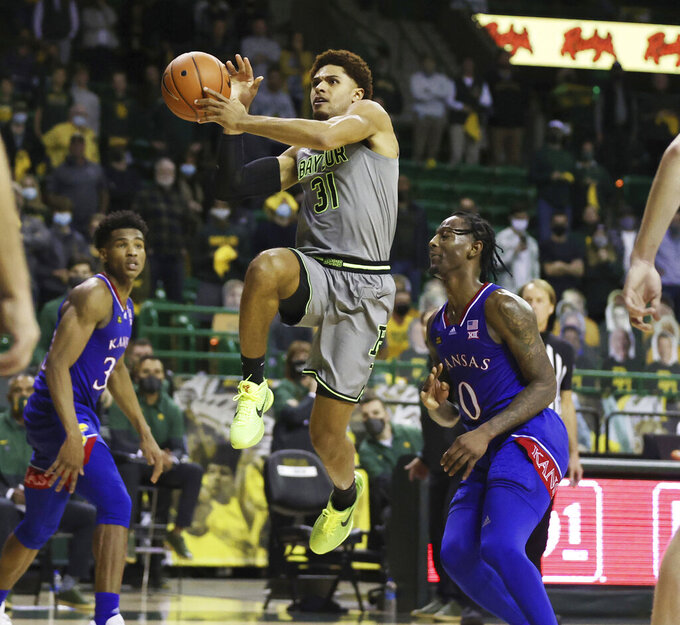 File-Baylor guard MaCio Teague, front left, scores past Kansas guard Marcus Garrett in the second half of an NCAA college basketball game, Monday, Jan. 18, 2021, in Waco, Texas. Teague and Davion Mitchell, two of the league’s best shooters, were part of a Big 12-record 23-game winning streak last season in their debuts as Baylor starters. Those former transfers had also gone through a redshirt season together. (Rod Aydelotte/Waco Tribune-Herald via AP, File)

Jonathan Tchamwa Tchatchoua and Adam Flagler got to watch Baylor win a lot of games from the bench last season, and now are among six former redshirts playing every game for the undefeated, second-ranked Bears.

Davion Mitchell and MaCio Teague, two of the league’s best shooters, were part of a Big 12-record, 23-game winning streak last season in their debuts as Baylor starters. That was after those former transfers also went through a redshirt season together.

“If you have two guys going through it at the same time, it makes it a lot easier. If you’ve got other guys on the team that have gone through, it makes it a lot easier,” Baylor coach Scott Drew said of redshirts. “The guys that are sitting out, they’re in large part a big reason why our teams have been successful, because you practice more than you play games.”

In an era of one-and-done players, Baylor has become consistently one of the Big 12’s top teams with rosters full of experience. The Bears (17-0) matched the best start in school history with a win at Texas last week before COVID-19 issues forced the postponement of five games that will keep them from playing again until at least Feb. 20.

Baylor isn’t the only team benefitting from multiple players who either had to sit out a season to satisfy NCAA transfer requirements or took a redshirt year. Either way, it allowed plenty of development time with their teams.

No. 19 Creighton has two senior starters and a key reserve, including leading scorer Denzel Mahoney, who transferred into the program. The starting lineup for No. 21 Wisconsin has three fifth-year seniors, among them top scorer D’Mitrik Trice and leading rebounder Micah Potter, who started his college career at Ohio State.

“Obviously we’re one of the oldest groups to ever play the game of basketball in college, I guess,” the 24-year-old Trice said with a laugh.

“The experience is always a big thing and coach (Greg) Gard always harps on that," Trice said. "For us to have freshmen come in this year in a big class and just learn everything they can from our older group is going to help them in the future and down the road. I think it’s going to help us, especially here getting late into the season."

Both the Badgers and Baylor have starting fives with an average age of about 22 1/2. That makes them older than the starting lineup of the NBA’s Chicago Bulls.

They all could even come back for another year in college since the NCAA isn’t counting this season against players' eligibility. That decision, and a blanket waiver for current transfers, removed the necessity of any players having to redshirt this season.

Tchamwa Tchatchou, a 6-foot-8 sophomore forward from Cameroon who initially went to UNLV, is now Baylor’s top rebounder and shot blocker without even starting a game. He has earned the nickname “Everyday Jon” for his work ethic and nonstop energy, both this season and in practice while redshirting.

“That redshirt year, it was actually really important for me. It allowed me to get used to the program, get comfortable around the guys,” Tchamwa Tchatchou said. “During my visits, I was talking to Davion and MaCio. They were actually going through the same process, and actually made me feel like I wanted to do the same thing.”

Three former redshirts are in Baylor's starting lineup: Mitchell, Teague and bruising 6-5 forward/guard Mark Vital, a 24-year-old fifth-year senior. Vital verbally committed in September 2013 to play for the Bears and redshirted as a freshman in 2016-17 before becoming a regular in the lineup and one the nation’s top defenders.

Before playing on Baylor's Elite Eight team in 2009-10, then being the sixth overall pick in the NBA draft, 6-10 center Ekpe Udoh had to sit out the previous season after transferring from Michigan.

“There were some advantages for him sitting out ... it was an advantage for him and the team,” Drew said. “And that’s what you want, win-wins."

“Obviously in our league, Baylor is executing the redshirt plan as well as it’s ever been executed in college basketball history,” Texas Tech coach Chris Beard said.

The Red Raiders played in the national championship game two years ago, still the last one played, losing to Virginia in overtime. They had two graduate transfers and senior guard Brandone Francis, a former transfer from Florida who had to redshirt in 2016-17, Beard’s first season at Tech.

Drew said the redshirt seasons provide “truly one year of development," allowing players to get better without the pressure of actual games. Along with the physical development from extra workouts and strength building, there is the increased basketball IQ that comes from learning the offenses and defenses of Big 12 and other opponents while on scout teams.

“Iron sharpens iron. When you’re competing every day against other great players, it helps get you better," Drew said. “And because we’ve had so many players that have had to sit out or have sat out, they can help mentally the people sitting out deal with it.”