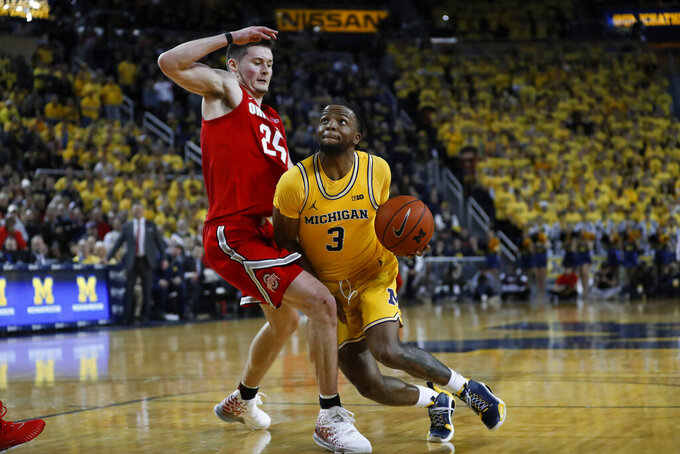 ANN ARBOR, Mich. (AP) — Ohio State and Michigan struggled through 40 minutes — two rivals trying to turn their seasons around, who on this night missed far more shots than they made.

In the end, this physical clash came down to a torn jersey and some clutch free throws.

Kyle Young made two free throws with 33.3 seconds remaining to give Ohio State the lead after a crucial replay review, and the Buckeyes held on for a 61-58 victory over the Wolverines on Tuesday night.

The game turned after officials went to the monitor with just over a half-minute left. Ohio State was ahead 57-56 when Michigan's Zavier Simpson drove to the basket and drew a foul on Young. The Ohio State forward's jersey was ripped, and a replay showed Simpson had gabbed the jersey while falling at the end of the play.

“That was crazy,” Young said. “I’ve never had my jersey ripped before.”

The foul on Young stood, but officials added a flagrant foul on Simpson as well. That meant each player shot two free throws. Simpson made his, and then Young made his. So the Buckeyes ended up with a one-point lead and the ball.

“I asked (the official), I said, ‘If he’s going up, and he's falling. Did he grab him to brace his fall?' And he said yes,” Michigan coach Juwan Howard said. “At the end of the day, we have to respect the call that was made.”

Michigan has lost six of its last nine. Ohio State has won three in a row after dropping six of seven.

Michigan started the game 3 of 17 from the field and shot 33% on the night.

It was the third straight home loss for the Wolverines, and they've shot under 40% from the field in all of them. They're also 19 for 76 from 3-point range over those three games, a 25% clip.

“I believe we got some really good shots. They didn't go in. We got some good shots at the rim that we didn't make,” said Franz Wagner, who had eight points and 14 rebounds but was 2 of 12 from the floor. “Lack of focus maybe, I don't know. Stuff like that hurts in these type of games.”

Ohio State: Kaleb Wesson had 23 points and 12 rebounds for the Buckeyes and was the only player on either team scoring consistently for much of the game. Ohio State led 28-27 at halftime, and Wesson had 15 points. He made three 3-pointers in the half.

“I'm OK if he scores all the points ... as long as we have the lead,” Buckeyes coach Chris Holtmann said. “You want balance, you want other guys involved, but sometimes in games, you go into it trying to attack a certain way.”

Michigan: The Wolverines were again without injured forward Isaiah Livers, who has missed nine of the team's last 10 games. Michigan was coming off a nice win over Rutgers, but this was a tough setback in a game the Wolverines easily could have won.

Both teams were in the top five earlier this season but have struggled in league play. Ohio State was close to the Top 25 in the last poll and may be able to move back in soon.

Ohio State: The Buckeyes are on the road again at Wisconsin on Sunday.

Michigan: The Wolverines host No. 16 Michigan State on Saturday.