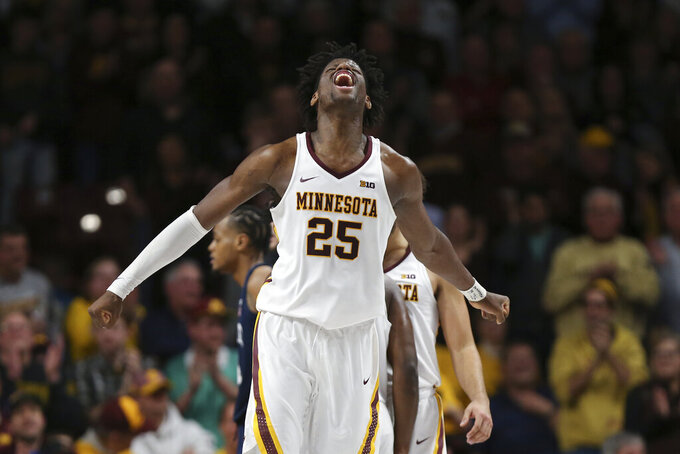 Minnesota's Daniel Oturu reacts to his team scoring a basket in the second half of an NCAA college basketball game against Penn State, Wednesday, Jan. 15, 2020, in Minneapolis. Minnesota won 75-69. (AP Photo/Stacy Bengs)

Penn State (12-5, 2-4) faces a huge game against Ohio State (12-5, 2-4) on Saturday — as huge as a mid-January game can be. The Nittany Lions won 12 of their first 14 games, and chatter started about this being the year they get back to the NCAA Tournament for the first time since 2011. Losses in three straight have dropped them into a three-way tie for 11th place. A home loss to the Buckeyes wouldn't be ruinous, but it only gets tougher after this. The Lions play three of the next four on the road, with trips to Michigan and Michigan State among the games.

Michigan State forward Xavier Tillman is establishing himself as one of the most versatile players in the game. He's averaging 13.9 points, 10.1 rebounds, 2.9 assists and 2.2 blocks — making him one of only two players in the country averaging at least 13 points, 10 rebounds, 2 assists and 2 blocks. Tillman and star guard Cassius Winston combine to account for 40% of the Spartans' scoring (537 of 1,342 points).

Purdue's 71-42 win over Michigan State on Sunday was its most lopsided in the series since a 100-70 victory on Feb. 27, 1971. ... Wisconsin plays at Michigan State on Friday night looking to knock off a fourth straight ranked opponent. The Badgers haven't beaten four Top 25 teams in a row since 2014-15 ... Michigan's Zavier Simpson’s 142 total assists and his 8.9 per game lead the nation. He has had eight or more in seven straight games. ... Iowa has missed a total of four free throws over its last two games (25 of 29). ... Maryland has posted two of its three lowest scoring totals in consecutive losses to Iowa and Wisconsin.

Iowa (14-3, 5-1) has elevated its game since Big Ten play began, riding two straight wins over Top 25 opponents and a come-from-behind win at Minnesota on Thursday to first place. Senior guard Kathleen Doyle turned in one of the best individual performances of the season in a 91-85 win over Indiana on Sunday. She had 31 points, 10 rebounds and nine assists. Makenzie Meyer and Alexis Sevillian made late 3s to beat Minnesota.