Saint Mary's plans for another upset after stunning Gonzaga 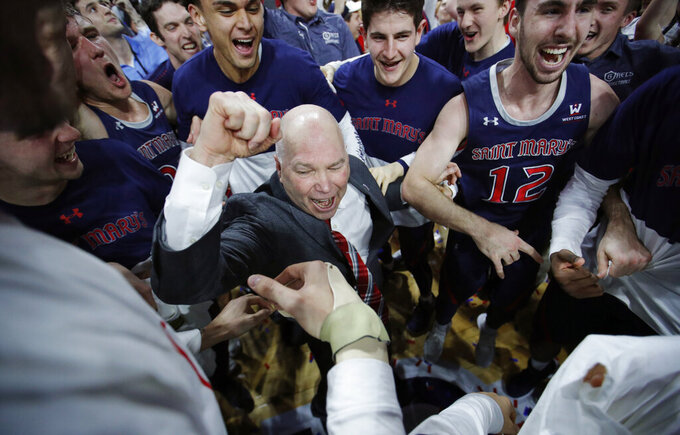 FILE - In this March 12, 2019, file photo, St. Mary's head coach Randy Bennett celebrates with his team after they defeated Gonzaga 60-47 in an NCAA college basketball game in the championship of the West Coast Conference tournament in Las Vegas. In all of his successful years at tiny Saint Mary's College and the challenge of turning around a program almost two decades ago, this NCAA Tournament berth is perhaps the most gratifying yet for Bennett. (AP Photo/John Locher, File)

MORAGA, Calif. (AP) — Randy Bennett has earned seven NCAA Tournament bids, made one trip to the Sweet Sixteen and turned a two-win team into one of the winningest on the West Coast since arriving to coach at tiny Saint Mary's nearly two decades ago.

This year's trip to the tournament might be the most unexpected, and gratifying, of Bennett's career.

His rebuilding Gaels weren't supposed to get here — not this year, anyway. It was last season's experienced group that went 30-6, won 19 straight games and absolutely planned to be playing on the big March stage only to be left out on Selection Sunday.

"The whole way we thought we'd be in," Bennett said.

And this season? The odds were against the Gaels.

"Just to win that tournament is hard, because you've got Gonzaga in the way," Bennett said. "They win it so often, and this year they're really good, so it wasn't something you count on, 'Hey, we'll just win the conference tournament,' you got to go through No. 1 in the country to do it. Didn't really see it coming. I knew we were playing better."

So, imagine how much less daunting it feels now for the 11th-seeded Gaels (22-11) to go cross-country for a first-round game against defending champion and No. 6 seed Villanova on Thursday in Hartford, Connecticut?

Not to mention the Gaels' lone trip to the Sweet Sixteen came from an upset of second-seeded Villanova in 2010 as a 10th seed. That had been the only win in program history against a top-10 team until the victory over Gonzaga in Las Vegas last week. There's a reminder of that Sweet Sixteen trip in the hallway outside the locker room that the players see as they walk out to practice each day in McKeon Pavilion.

Things began to turn around for Saint Mary's after a 94-46 thumping at Gonzaga on Feb. 9.

Ford, a junior guard averaging a team-best 21.3 points, and senior center Jordan Hunter spoke up in a hurry. They reminded their teammates everyone must remain positive. Saint Mary's started defending better, then won five straight games that included lopsided road victories at Pacific and San Diego before a 69-55 home defeat to Gonzaga on March 2 in which the Gaels hung tough deep into the game.

Then Saint Mary's pulled off the improbable: stunning the favored Zags 60-47 for the WCC tournament title.

"It's just a great feeling to knock off the No. 1 team in the country. It doesn't happen that often," Ford said. "To play the defending national champions is just another great opportunity for us."

Bennett received 400 congratulatory text messages that night, his record. He allowed his players to celebrate the upset and be proud for a short time, then it was time to return to work.

"There's no bums in the tournament," Hunter noted.

The good vibes through the selection show knowing they were in was a drastic difference for the Gaels from being on the bubble a year ago and not getting into the tournament.

"Oh, man. I still remember that like it was yesterday," Ford said. "We were all at Coach Bennett's house and they listed all the teams, they did it in alphabetical order and they skipped our names. We were just dead silent when we walked out. It still stings."

Despite all the chatter about a basketball rebuild on this campus tucked away in the suburban East Bay hills, the players weren't going to let that affect their postseason goals.

"My first three years I've been part of three tournament teams, only one of which made it," said Hunter. "We get to read all the articles about how we were snubbed. We try not to feed the narrative too much with all the rebuilding stuff and all that. We knew we had a great group of guys that just didn't have as much experience as the teams that had come before, by the nature of having such great players ahead of us having such great seasons. We knew with a few reps playing with each other, which is obviously important as just getting better yourself, it would take us a long way."

Bennett knew the Gaels would have to topple Gonzaga to land a spot in the NCAA bracket. There was almost no time for scouting, having played until 10:30 p.m. the previous night with a quick turnaround to the final.

"These guys are beatable," Bennett told his team, "and to get to the tournament you are going to have to beat them."

Now, Saint Mary's is going to enjoy this ride — one it wants to last a while. That will mean another upset this week.

"It's a bit surreal. We probably don't realize what we've accomplished, but we've gotten two good days of practice so that brings you down to earth, for sure," Hunter said. "We're definitely riding high. We'll be ready to roll."